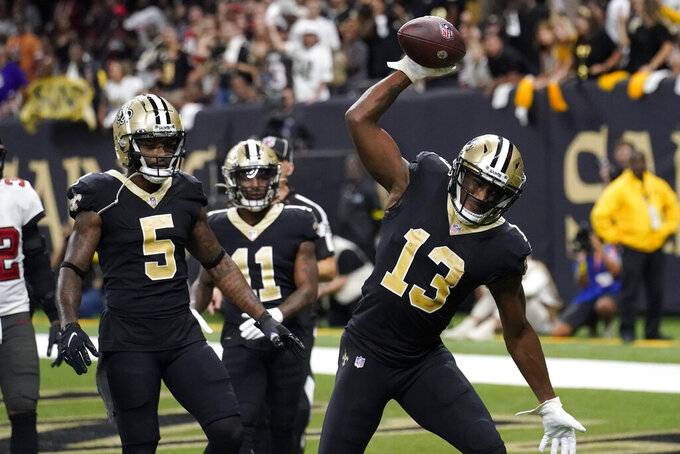 OPENING LINE: Saints by 2 1/2, according to FanDuel SportsBook.

TURNOVER DIFFERENTIAL: Saints minus-3; Panthers minus-3.

SAINTS PLAYER TO WATCH: WR Michael Thomas is making an early play for Comeback Player of the Year with 11 catches for 122 yards and three touchdowns this season. He’ll face a Carolina defense that has been stout for the past two seasons against the pass and ranks third in the NFL this year.

PANTHERS PLAYER TO WATCH: RB Christian McCaffrey is coming off his first 100-yard rushing game since 2019 and is starting to see more action in the offense after getting just 14 touches in the team's season-opening loss to the Cleveland Browns. The Panthers have managed just 53 and 58 offensive plays in their first two games — well below the NFL average — so McCaffrey's touches could increase if the Panthers can stay on the field.

KEY INJURIES: Saints RB Alvin Kamara sat out Week 2 against the Buccaneers, but is hopeful to return this week. Look for Mark Ingram to fill in again if Kamara is scratched again. ... QB Jameis Winston is dealing with a back injury, but has been playing through it. ... The Panthers will be monitoring the status of CB Donte Jackson, who suffered a hamstring injury in last week's loss to the Giants.... Panthers rookie LB Brandon Smith is still dealing with a thigh injury.

SERIES NOTES: New Orleans has had Carolina's number in recent years, winning nine of the past 11 matchups — most of those with Drew Brees at quarterback. ... The Panthers have faced the Saints more than any other franchise in team history. This will be the 56th meeting, including the postseason. ... The Saints won the only playoff meeting in a 2017 wild-card game.

STATS AND STUFF: This is the Saints third straight game against an NFC South foe to open the season. ... New Orleans has allowed 10 sacks, second most in the NFL. ... QB Jameis Winston has nine TDs and one INT for a 103.4 rating in his past four road starts. ... RB Alvin Kamara has 803 scrimmage yards and five TDs in his past seven road games. ... RB Mark Ingram has at least 70 yards from scrimmage in his past six games vs. Carolina. ... Rookie WR Chris Olave had five catches for team-high 80 yards in Week 2. ... The Panthers have lost seven straight games at home going back to last season. Their previous home win came against the Saints on Sept. 19, 2021. ... Carolina QB Baker Mayfield has had six passes tipped at the line of scrimmage this season. He now has had 50 tipped passes at the line since coming into the league in 2018, the most of any NFL quarterback, according to ESPN Stats and Info. ... Panthers DE Brian Burns has 27 1/2 sacks through his first 50 games. The only other Carolina player with more was Julius Peppers (31). ... Carolina starts five former first-round draft picks on defense. ... Since the start of the 2021 season, the Panthers defense has the second-most games (13) of not allowing an opponents to pass for at least 200 yards, behind only the Buffalo Bills (14).

FANTASY TIP: QB Jameis Winston has struggled against Carolina throughout his career with New Orleans and Tampa Bay. In 10 games vs. the Panthers, Winston has thrown nine touchdown passes and 16 interceptions while being sacked 36 times.