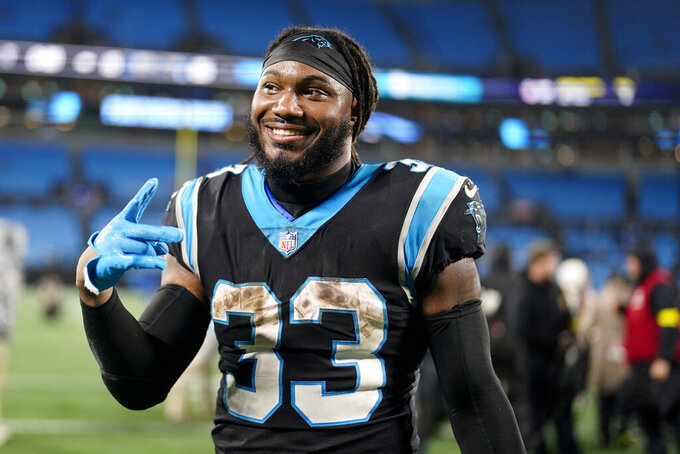 Carolina Panthers running back D'Onta Foreman smiles after their win against the Atlanta Falcons in an NFL football game on Thursday, Nov. 10, 2022, in Charlotte, N.C. (AP Photo/Jacob Kupferman)

CHARLOTTE, N.C. (AP) — It was almost inconceivable that the Panthers' running game might improve after trading star running back Christian McCaffrey to the San Francisco 49ers.

Yet, that’s exactly what has happened.

Carolina has averaged 159.5 yards per game on the ground in the four games since McCaffrey was traded; it averaged 90.3 yards per game in the six games with him in the backfield.

The Panthers have recommitted to the running game under interim coach Steve Wilks, and D’Onta Foreman has proven to be the ideal back for the system — a tough, physical back who wears down opponents.

Foreman has run for 389 yards and four touchdowns in the last four games, including three games with at least 118 yards. His only unproductive outing came against Cincinnati when he was held to 23 yards on seven carries after the Panthers fell behind 35-0 at halftime and were forced to abandon the run.

But the Panthers (3-7) bounced back Thursday night with a 25-15 win over the Atlanta Falcons, amassing a season-high 232 yards rushing that kept them alive in the topsy-turvy NFC South. Foreman ran for 130 yards on 31 carries, the most carries by a Carolina running back since Nick Goings in 2004.

“It was a mere fact of, let’s just keep running it,” Wilks said. “I felt at times we had to go and try to win the game for us putting the ball in the air. We kept it on the ground. We kept grinding it and trying to just really wear them down in the fourth quarter.”

Foreman is a free agent pickup from the Tennessee Titans this offseason, and is averaging 4.9 yards per carry in the past four weeks compared to just 12 carries prior to the McCaffrey trade.

“It’s the offensive line,” Foreman said. “I have to give credit to those guys. The way they are out there creating holes and moving. I just benefit from the hard work they put in.”

WR Laviska Shenault Jr.: When he plays well, the Panthers seem to win. The problem is Shenault has bothered by hamstring injuries for much of the year.

But his 41-yard touchdown run — on a reception on a swing pass out of the backfield that was ruled a lateral instead of a forward pass — gave the Panthers a 10-0 lead and early momentum. It was a play similar to his 67-yard touchdown reception against the New Orleans Saints earlier in this season.

The Panthers repeatedly sent Shenault in motion pre-snap on Thursday night, running him behind the backfield and then looking to give him the ball with momentum behind him and allowing him to make plays in space.

QB Baker Mayfield's decision-making: No, he didn't play against the Falcons, but the Panthers backup quarterback did headbutt a number of teammates while celebrating the win on the field — without his helmet on.

That prompted commentator Al Michaels to quip: “Good way to wind up in concussion protocol even though you don’t get in the game.”

Some offensive linemen, including Brady Christensen, looked stunned after taking a headbutt.

The Panthers' front seven: Carolina was coming off a dismal performance against the Bengals, allowing Joe Mixon to run for 153 yards and four touchdowns and Cincinnati to rush for 241 yards as a team.

Credit interim defensive coordinator Al Holcomb for making adjustments despite being on a short week and holding the Falcons, who had the league's No. 4-ranked rushing offense, to 138 yards and no touchdowns on the ground.

Three quarterbacks: At some point you'd suspect that the Panthers are going to determine they only need two quarterbacks on the 53-man roster, which means possibly waiving Mayfield or Sam Darnold.

In the meantime, Walker will remain the starter.

The irony being that the undrafted quarterback is playing over two guys taken in the top three picks in the 2018 NFL draft and who the Panthers gave up draft picks to acquire.

Although Walker was 10 of 16 for 108 yards against the Falcons, Wilks said he did “a great job of managing the game" and was pleased he didn't turn the ball over.

Panthers CB Donte Jackson will have an MRI on his injured Achilles and there is some concern he could be done for the season. Jackson has been dealing with an ankle injury all season.

5 — Number of sacks by the Panthers against the Falcons, a season-high.

If the Tampa Bay (4-5) loses to Seattle in Munich, Germany, on Sunday, the “keep pounding” Panthers will be within one game of the NFC South lead despite a 3-7 record. Carolina is back in action Nov. 20 at AFC North leading Baltimore.