Pats get 9 sacks in dominant 26-3 victory over Colts 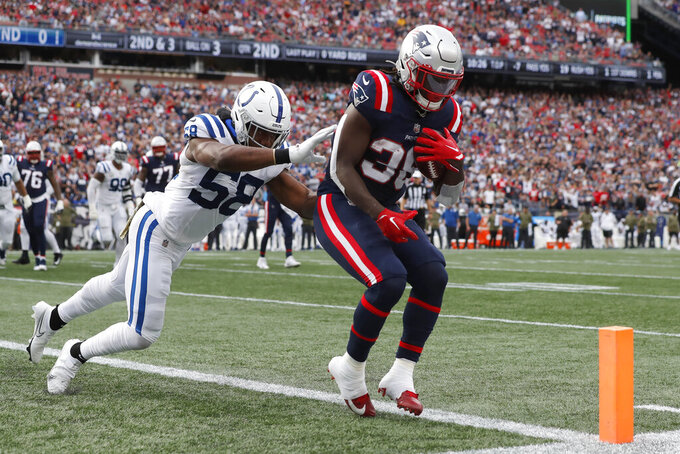 New England Patriots running back Rhamondre Stevenson, right, steps into the end zone for a touchdown as Indianapolis Colts linebacker Bobby Okereke (58) tries to defend in the first half of an NFL football game, Sunday, Nov. 6, 2022, in Foxborough, Mass. (AP Photo/Michael Dwyer)

FOXBOROUGH, Mass. (AP) — When Patriots linebacker Matt Judon is lined up alongside Lawrence Guy, he expects good things to happen.

As teammates in Baltimore early in their careers, they often took turns clearing paths for one another to get the quarterback.

“When I see him in the gap, I know I can wrap around because I know he’s got my back," Judon said.

Reunited in New England, Judon was reminded on Sunday just how devastating of duo they can be together.

The win moves the Patriots (5-4) above .500 for the first time this season as they head into their bye week.

Josh Uche also had three sacks, leading a defense that held Indianapolis to 121 yards and 0 of 14 on third down.

“My teammates put me in great situations to execute," Judon said. "I’m just willing to do whatever I need to do for our defense to have success. Whatever that is, however it looks, and however I need to play I’m willing to do it. Today it was just one of those games.”

Jonathan Jones returned an interception 17 yards for a touchdown to finish the scoring.

The Colts (3-5-1) have lost three straight and have yet to earn a win since benching quarterback Matt Ryan in favor of second-year player Sam Ehlinger.

Under pressure throughout the game, Ehlinger finished 15 of 29 for 103 yards and the late interception that was returned for a touchdown. It was the fourth time this season the Colts have allowed five or more sacks.

“That’s an offense that’s unacceptable,” Ehlinger said. “Our defense kept us in the game. And we didn’t do anything out there to help them out. They were playing their tails off and couldn’t get anything going in every phase.”

The Colts had trouble sustaining drives without running back Jonathan Taylor, who was out with the ankle injury he suffered in last week’s loss to Washington.

Zack Moss was acquired in a trade with Buffalo last week to provide some help, but he was inactive after just a few days of practice. Deon Jackson, who began the season as the team’s third string running back, made just his second career start and managed only 23 yards on 11 carries.

New England wasn’t great offensively, but took advantage of some decent early field position to move the ball enough to set up Folk for two first-half field goals of 49 yards and 43 yards.

The special teams also did their part with Jonathan Jones blocking Matt Haack’s punt on Indy’s fifth drive and recovering at the Colts 2.

“Everybody got in on the fun,” Judon said.

New England’s defense did the rest.

Indianapolis entered Sunday short-handed after trudging through another week of adjustments offensively following the firing of offensive coordinator Marcus Brady. It didn’t seem to help Ehlinger, who lost in his starting debut last week.

Ehlinger didn’t complete a pass until midway through the second quarter and he was sacked five times in the first half.

Judon beat right guard Matt Pryor for two of them, prompting the Colts to replace Pryor with Will Fries on their third drive.

It did little to jumpstart things, with Indy gaining just 64 yards on 30 plays in the half. The Colts had a chance to put points on the board just before halftime, but Chase McLaughlin’s 39-yard field-goal try missed wide left.

Ehlinger became the latest quarterback to leave Foxborough with a loss.

Since 2003, rookie and second-year quarterbacks have a 4-43 record in visits to Gillette Stadium.

“When you’re playing a young quarterback if you can make it tough like we did today ... that pressure — he felt that early in the game," Patriots safety Devin McCourty said.

Colts: at Raiders next Sunday.