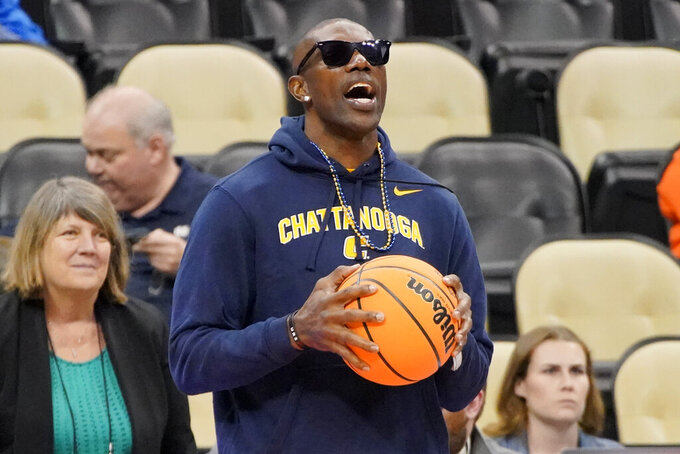 Pro Football Hall of Fame wide receiver Terrell Owens watches as Chattanooga warms up before a college basketball game against Illinois in the first round of the NCAA tournament in Pittsburgh, Friday, March 18, 2022. (AP Photo/Gene J. Puskar)

Terrell Owens is returning to professional football to catch more passes, mentor young receivers and prove he can still play in the NFL at age 48.

Owens, who was inducted into the Pro Football Hall of Fame in 2018, is joining the Fan Controlled Football league for its second season. The 7-on-7 indoor league is expanding from four teams to eight and begins play on April 16.

“I never really retired,” Owens told The Associated Press. “This is just an opportunity to partner with Fan Controlled Football and what they’re doing, giving guys an opportunity to really play football. And then, hey, you never know. This could be a springboard for those guys to either go to the CFL, NFL, whatever the case may be.”

Owens said he enjoys working with receivers. Now, he’ll get paid to do it.

“This is nothing different than I’ve been doing over the last four or five years, just running around, teaching guys, helping guys with how to run routes, transitioning in and out of their routes, stance and start, just educating them about football and things that made me the Hall of Famer that I am today,” Owens said. “Why not go and mentor and help some kids and even quarterbacks just helping them with learning and understanding the different levels of speed because I’ve worked with high school kids, I’ve worked with college kids and, obviously, some guys that are in the pros as well.”

Owens has stayed in shape playing in various basketball and softball leagues. He said an AFC team owner called him last season and he spoke to the general manager and coach.

“I’m not your typical 48-year-old,” Owens said. “I think anybody that has seen me ... everybody sees the speed is there. There’s a few athletes that can defy the odds or have defied the odds and I honestly feel like I’m one of those guys.”

Owens is eighth in NFL history with 1,078 receptions, third with 15,934 yards receiving and third with 153 touchdown catches.

He was a five-time All-Pro, a six-time Pro Bowl pick and one of the most entertaining players of his generation in a 15-year career with San Francisco, Philadelphia, Dallas, Buffalo and Cincinnati.