Playoffs? Streaking Jets not even entertaining the thought 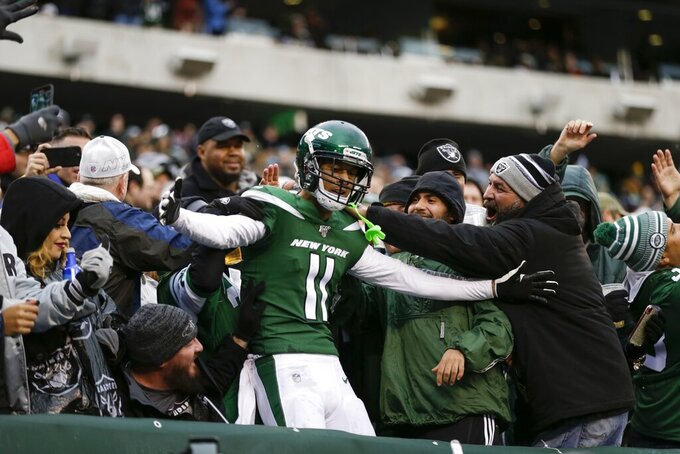 New York Jets wide receiver Robby Anderson (11) celebrates with fans after scoring a touchdown during the second half of an NFL football game against the Oakland Raiders Sunday, Nov. 24, 2019, in East Rutherford, N.J. The Jets won 34-3. (AP Photo/Adam Hunger)

NEW YORK (AP) — The New York Jets know what some excited fans are thinking — but they refuse to go there.

A three-game winning streak has stirred some sudden optimism, including thoughts of perhaps a late-season playoff push.

Even after an impressive 34-3 victory over Oakland on Sunday, the Jets are still just 4-7 and would need a lot — A LOT — of help to even realistically have a shot at the postseason.

“We kind of dug ourselves in a hole with the way we played earlier in the year,” defensive end Henry Anderson said Monday. “As good as we’ve played at points the last few weeks, we know where we're at. And we know we’ve just got to go out each week and do what we can to win each week.”

The Jets have been getting used to that feeling lately and there’s plenty of reason to think it can continue with New York playing the winless Bengals (0-11) in Cincinnati on Sunday.

But the Jets have been in this position before, taking on a team desperate for a victory. New York traveled to then-winless Miami in Week 8 and was embarrassed 26-18. The Jets opened as 4-point favorites against the Bengals, not that that means much to the coaches or players.

“This is going to be a tough game for us,” coach Adam Gase insisted.

Lip service? Maybe. But, it has been that type of season for the Jets, so Gase will say whatever he can to make sure his team doesn’t underestimate the lowly Bengals.

For one, Gase pointed out Cincinnati lost to Oakland by seven points last week and just six to Pittsburgh on Sunday. Bengals coach Zac Taylor also announced that Andy Dalton will be back at quarterback after rookie Ryan Finley started the last three games.

“We’ve got a long way to go,” Gase said. “I’ve been in this spot quite a few times as far as having five games left and everybody starts talking about outside of this week. That’s when the wrong thing happens. So, we need to stay focused on the task at hand right now.”

Since quarterback Sam Darnold sat down with Gase earlier this month to tell the coach what he thought worked and didn’t work with the offense, things have improved dramatically.

In four games in November, Darnold has thrown eight touchdown passes and just two interceptions, and has also run for two scores. His quarterback rating in that span is a robust 107.5. The second-year quarterback is also making smart plays, often throwing balls away now instead of taking unnecessary chances.

“Especially first and second down, even third down, sometimes a throwaway is a good play,” Darnold said.

Safety Brian Poole, who’s looking for the ball he returned for a 15-yard touchdown — the first score of his NFL career.

Poole’s teammates lifted him up and carried him around the back of the end zone for a few moments. While Poole had both arms in the air, a fan reached down from the stands and swiped the ball out of the safety’s left hand. Poole sent a post on Twitter on Monday morning, hoping to find the fan while offering a signed jersey in return for the ball.

Kelvin Beachum. The veteran left tackle’s return from an ankle injury that sidelined him three games has helped stabilize a shaky offensive line. In the three games since he came back, the line has played well even with other injuries occurring and backups coming in and out. Beachum, a free agent after this season, has also mostly kept Darnold’s blindside clear.

“Beach is awesome,” Darnold said. “The way that everyone communicates when he’s in there, he’s a really good leader and a really good pass protector and a great offensive lineman.”

Sam Ficken. There are still some major questions as to whether he’s reliable enough to be the Jets’ kicker of the future. He was wide left on a 48-yard field goal attempt against Oakland, making him 9 of 14 this season — with one miss in each of his last four games.

Rookie right tackle Chuma Edoga has a sprained medial collateral ligament in his left knee and Gase said he’s considered week to week. ... Beachum sprained his other ankle against the Raiders, but could practice on a limited basis Wednesday. ... CB Darryl Roberts (calf) could return to practice after missing the last three games.

34 — The Jets have scored 34 points in three straight games, all victories. It marks the first time New York has scored at least 30 in three games in a row since the 2008 season, when it averaged 38.3 points during Weeks 10-12.

Beware the Bengals. A loss in Cincinnati would make all the good vibes vanish in a hurry. The venom directed at Gase by fans that has dissipated the last few weeks would also be back in a big way.

“Guys are going to be ready and they just want to taste that fourth win,” running back Le’Veon Bell said. “We want to make sure we continue to strive for it and continue to stack wins.”