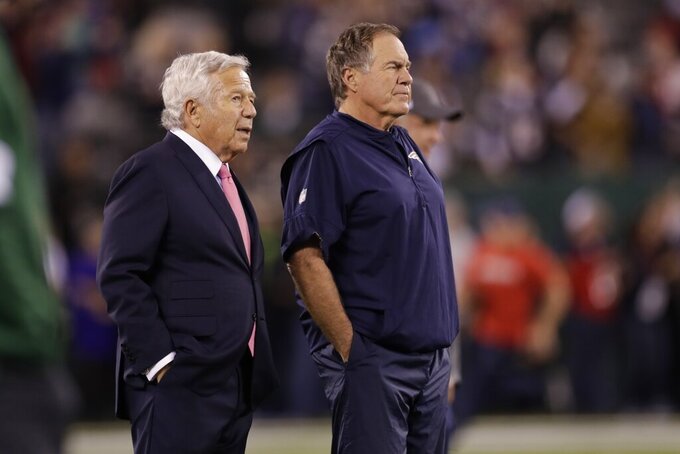 FILE - New England Patriots owner Robert Kraft, left, talks to head coach Bill Belichick as their team warms up before an NFL football game against the New York Jets in East Rutherford, N.J., in this Monday, Oct. 21, 2019, file photo. Belichick never was one to spent wildly in free agency. But after watching Tom Brady celebrate another Super Bowl in another city, Belichick and his boss, Robert Kraft, had seen enough. (AP Photo/Adam Hunger, File)

BOSTON (AP) — Four seasons ago, Patriots coach Bill Belichick entered training camp feeling like he had “the best quarterback situation in the league.”

Tom Brady was his starter. He had a likely successor in Jimmy Garoppolo developing nicely behind the future Hall of Famer. He even had a capable third option in Jacoby Brissett, who had proven himself the previous season when he stepped in to start two games while Brady was serving his four-game “Deflategate” suspension.

Belichick traded Brissett to the Colts at the end training camp in 2017 and the next month shipped Garoppolo to the 49ers for a second-round draft pick.

“It’s just not sustainable given the way that things are set up,” Belichick said of breaking up the trio at the time.

Four seasons later, the Patriots’ quarterback situation is squarely back in the spotlight.

It’s been a year since Brady departed in free agency to join the Tampa Bay Buccaneers. As he gears up to defend the Super Bowl title he won this past season, his former team enters the draft still looking to figure out his long-term replacement.

The Patriots spent big and filled several holes during the first wave of free agency. The flurry of moves did include re-signing quarterback Cam Newton after he led New England to a 7-9 record in 2020. New England missed the playoffs for the first time since 2008.

But the one-year, $1.5 million base contract Newton inked is a clear indication the Patriots are still hunting for a franchise QB.

To no one’s surprise, Belichick is remaining coy about his draft plans.

“Honestly, I’m not that concerned what the general trends and all that are,” he said. “Just trying to help our team and find the best methods we can to make our team as competitive as we can, whatever that entails, and there’s certainly a lot of chapters in that book, a lot of different ways to do it."

The Patriots hold 10 picks, including the 15th overall. So if he chooses, Belichick has plenty of assets to potentially trade up and go after a highly rated member of this year’s quarterback class such as Alabama’s Mac Jones or North Dakota State’s Trey Lance.

Team owner Robert Kraft said recently the spending spree this offseason wasn’t about Brady earning a seventh Super Bowl ring elsewhere as much as the Patriots seizing an opportunity to improve. That focus must extend to the draft as well, he said.

“In the end, if you want to have a good, consistent winning football team, you can’t do it in free agency,” Kraft said. “You have to do it through the draft because that’s when you’re able to get people of great talent, whether it’s Willie McGinest or Tom Brady, you get them at a price where you can build the team and be competitive.”

Belichick has drafted 10 quarterbacks since selecting Brady 199th overall in 2000. Of those 10 picks, Garoppolo was highest chosen, taken in the second round and 62nd overall in 2014.

So the idea of the Patriots coach even potentially using a first-round pick on the position naturally has drawn intrigue.

Belichick called the quarterback crop “an interesting group,” but he isn’t tipping his hand about what it would take for him to trade up into the top five where the top prospects are expected to be chosen.

“A lot of it is fluid but there are certainly those scenarios that are worth going through as exercises to think about and to kind of prepare,” he said. “I’d say, more often than not, the ones that you go through don’t happen. It’s usually something a little bit different. But, you never know.”

The Patriots have already addressed some of their holes on defense, including adding defensive back Jalen Mills. But they might not be done tweaking the secondary.

Cornerback Jason McCourty, a solid contributor in New England the past two seasons, remains a free agent. The future of 2019 Defensive Player of the Year Stephon Gilmore is also uncertain as he enters the final year of his five-year contract.

So if the Patriots don’t make a move at quarterback in the first round, they could use the pick to grab Alabama cornerback Patrick Surtain II or South Carolina cornerback Jaycee Horn.