Raiders will be without injured RB Josh Jacobs vs. Jets 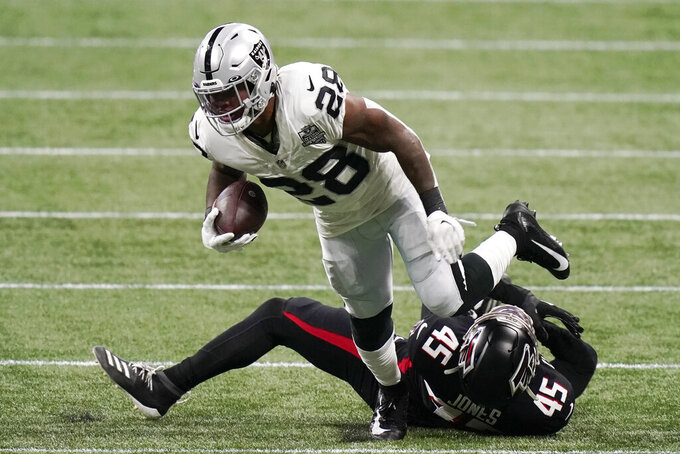 The Las Vegas Raiders will be without leading rusher Josh Jacobs and safety Johnathan Abram for this week’s game against the winless New York Jets.

Gruden had hoped both would be able to play this week but it wasn’t possible and now he hopes the injuries don’t linger even longer.

“I was optimistic they would both play in New York. But I was wrong,” Gruden said. “I’ve been wrong a lot lately here. We hope to have those guys back next week. If we don’t, we’ll carry on. We’ve got capable players and we’ll be ready to play.”

The absences deliver a blow to the Raiders (6-5) who are looking to bounce back from last week’s 43-6 loss at Atlanta and remain in the thick of the AFC playoff race.

Jacobs ranks fifth in the NFL with 782 yards rushing and nine TD runs this season and is a major part of the Raiders offense. But he also has the eighth lowest yards per carry among qualified runners this season as he has struggled to generate big plays.

Backup Devontae Booker has performed well in a relief role with 326 yards rushing at an average of 5.5 yards per carry this season. Jalen Richard and Theo Riddick will also be in the rotation and are strong options as receivers out of the backfield.

“He’s going to get the start. He’s a good player,” Gruden said about Booker. He’s proven that he can carry the ball, catch it and pass protect.”

Las Vegas relies heavily on the running game and ranked second in the league with an average of 190.7 yards rushing per game during a three-game winning streak in Weeks 8-10.

NOTES: The Raiders will also be without DT Maliek Collins, who is headed to IR with injuries to his hamstring and ankle. ... CB Trayvon Mullen (illness), DT Maurice Hurst (ankle, calf) and CB Isaiah Johnson (groin) are all listed as questionable.