Rams' Donald still fighting after 2 games without a tackle 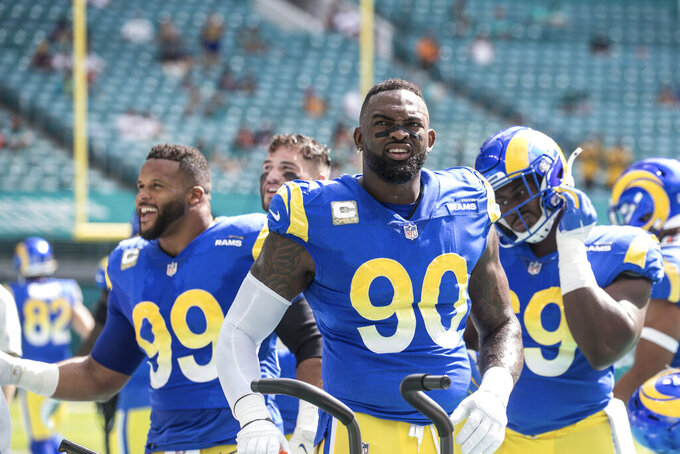 On Monday night in Tampa Bay, the Los Angeles Rams' All-Pro defensive tackle didn't even make a single play that registered in the NFL's statistics in his 62 snaps: No sacks, no tackles, no quarterback hits.

Donald doesn't look at stat sheets, but he had no need to do so in Tampa anyway.

“I knew (from) playing the game I didn’t make a damn tackle,” Donald said Wednesday with a frustrated chuckle. “It’s like, ’Oh, (shoot), I’ve at least got to get one tackle.'”

Statistics are a woefully imprecise measure of Donald's impact on games, of course. The six-time Pro Bowl selection affects game plans, run schemes and quarterbacks' decision-making simply by going into a three-point stance.

Donald makes plays for the Rams even when he isn't actually the one making the play, and opponents and teammates alike know it.

“I don’t feel like I’m playing bad football,” said Donald, who is still third in the NFL with nine sacks this season. “I feel like I’m disruptive. I’m still almost making plays, getting to the quarterback, and he’s getting the ball out at the last minute, or whatever the case may be. It’s just guys around me making plays, too. It’s nothing that I’m mad about. If I was out there playing bad, I’d be more disappointed in that.”

Donald also didn't draw a holding penalty against Tampa Bay or Seattle — which is not to say he wasn't held. In fact, Donald gets held constantly, according to Donald and Rams defensive coordinator Brandon Staley.

“He hasn’t drawn a holding call in, I think, three or four weeks, which we’re going to have to take a look at,” Staley said. "That’s just saying that people are blocking him straight-up, which we know is not the case.”

In fact, Staley compares Donald's dominance to another physical force who towered so far above his sport that he seemed to be officiated by different standards.

“Players like that, it’s like Shaquille O’Neal back when he was playing,” Staley said. “This guy, I think people take for granted how good (Donald) is, and we need to make sure people are seeing the game the way they need to.”

In the most glaring example, Tampa Bay left tackle Donovan Smith's full-arm hold of Donald prevented him from sacking Tom Brady in the end zone. The play, which also included an apparent fumble by Brady that was curiously ruled an incomplete pass, would have resulted in a safety if the officials had thrown a flag for the obvious hold.

Donald realizes it's all part of being among the best ever to play his position, but that doesn't make it more palatable when referees don't see what he sees.

“In my opinion, they hold every play,” Donald said. “There’s some blatant holds that we didn’t get the call for, but you’ve got to keep playing. Hopefully I’ll get a couple. ... All the damn time I talk to (officials). I say, ’You’ve got to see that holding call.' They say they don’t see it. I’m like, ‘Man, the guy got me around my neck, grabbing, pulling on my shirt! I just beat a guy with a clean rush!’ But it’s all right. Hopefully I’m going to get one sooner than later, and it’s going to help us big-time, so I've just got to keep playing.”

The best measure of Donald's impact might be an evaluation of how the Rams' entire defense is playing — and by that measure, Donald has never been better.

The Rams (7-3) host the San Francisco 49ers on Sunday with one of the best defenses in the league playing at its highest level yet. Staley's crew is allowing an NFL-low 291.9 yards per game, and only unbeaten Pittsburgh is limiting opponents to fewer than the Rams' 19.2 points allowed per game.

Donald deserves a huge chunk of the credit, Staley believes.

“This guy is as disruptive at the point of attack as ever,” the rookie coordinator said. “I think the (opponents') run game hasn't expressed itself in his particular area, which is unusual. And then in the pass rush, this guy attracts more attention than anybody, and we're doing our best to get him isolated.”

The Buccaneers' game plan against Donald was clear: Brady constantly took short dropbacks and made quick throws to prevent Donald and the Rams' other pass rushers from having time to threaten him. Samson Ebukam got Los Angeles' only sack while Donald was occupying two Bucs blockers by himself.

“I definitely think (having no tackles in two games is) a statistical anomaly,” Staley added. “He just doesn't have that normal production that he typically has, but he's playing very well for us."