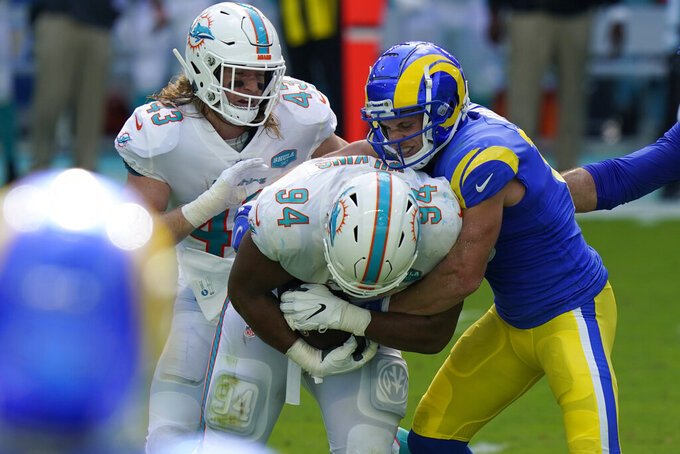 FILE - In this Nov. 1, 2020, file photo, Miami Dolphins defensive tackle Christian Wilkins (94) intercepts a pass intended for Los Angeles Rams wide receiver Cooper Kupp, righty, during the first half of an NFL football game, in Miami Gardens, Fla. The exuberant 315-pound tackle had a simple explanation for his first career interception, the kind of pivotal play that has become a habit for the Miami Dolphins' defense. “It’s all in the hips,” Wilkins said. (AP Photo/Lynne Sladky, File)

INGLEWOOD, Calif. (AP) — The chance to play against the NFL's worst pass defense should be a golden opportunity for Jared Goff and Sean McVay to get the Los Angeles Rams back into top form after a few stumbling weeks.

It's not that simple for the quarterback or his head coach.

That woeful pass defense belongs to the Seattle Seahawks (6-2), who still lead the NFC West and always present far more problems than opportunities.

There's also the matter of Russell Wilson, who has proven he can cause trouble for the Rams (5-3) no matter how many points Los Angeles puts up Sunday.

“We’ve always really seemed to have really close games,” Goff said of meetings with the Seahawks. “It’s really been one-score, last-drive, last-play type of games with them always, every year. They’re a great team. It's always a good game, and always exciting.”

Indeed, five of the teams' eight meetings in Goff's career have been decided by six points or fewer. This matchup carries particular importance after the sudden tightening of the division race, with the Rams watching on their bye week while Seattle, Arizona and San Francisco all lost.

Goff struggled in the Rams' last game, going 35 for 61 with four turnovers while Los Angeles scored only 17 points in losing to Miami.

A week later, the Seahawks' woes in pass defense were amplified when Buffalo's Josh Allen passed for 415 yards and led the Bills to 44 points in their win.

“We’re still trying to get it together,” Seahawks coach Pete Carroll said of his defense. “We haven’t played like we want to. We played winning football, but it’s not playing the style that we’d like to play. I feel like our best ball is ahead of us.”

Goff has thrown for at least 290 yards in each of the Rams' last four games against Seattle, and Los Angeles has won three of them. The Seahawks' top two cornerbacks, Shaquill Griffin and Quinton Dunbar, are slowed by injuries and might not play Sunday.

Everything seems set up for Goff, Robert Woods and childhood Seahawks fan Cooper Kupp to reclaim their passing game's mojo.

The Rams' history with the Seahawks — and Wilson's playmaking presence — means they won't take anything for granted.

“It's always a hard-fought game when we play Seattle,” said defensive tackle Aaron Donald, who has sacked Wilson eight times in the teams' last five meetings. “It's always a challenge when you're playing against a great quarterback who can do so much.”

Wilson has plenty of work to do, For the third straight game, the Seahawks are likely to be without their top two running backs, Chris Carson and Carlos Hyde. Rookie DeeJay Dallas has been the primary ball carrier, but had just seven rushes last week against Buffalo.

Travis Homer and Alex Collins also were in the mix against the Bills, but Seattle isn’t likely to run much against the fifth-best run defense in the league.

Carroll is impressed by the work of rookie Rams defensive coordinator Brandon Staley, whose group is near the top of the league in most statistical categories.

“They’re able to keep the explosives down and take advantage of one of the best players ever, ever in Aaron Donald,” Carroll said. “He’s off to another great season. Nine sacks already. He’s had a bunch of close ones, too. He could have 20 probably already. I think (Staley) doing a good job playing to (Donald's) strengths.”

Granted they are entirely different teams, but Seattle’s pass defense is the biggest weakness of a team with big postseason aspirations. During the loss to last week, the Bills barely even tried to run, attempting just 19 rushing plays, only three in the first half.

Seattle is allowing a league-worst 362 yards per game passing, on pace to shatter the NFL record for most passing yards allowed in a season.

Jalen Ramsey plays all over the field on the Rams' defense, but the standout cornerback seems likely to match up regularly with DK Metcalf, the Seahawks' burgeoning star receiver. Metcalf didn't back down from Ramsey last year, even getting into a shoving match.

Staley isn't committing to a one-on-one showdown, but he's looking forward to it anyway.

“This is going to be a great chess match between these two guys, if they line up near each other,” Staley said. “This is what gets you excited about pro sports, is to see two elite players square off against one another. These two guys are as good as I think that I’m seeing right now in the NFL at their positions."

Carroll will forever be linked to the LA Coliseum after his decade-long run of success as head coach at Southern California, but he’s thrilled to see what SoFi Stadium looks like on the inside.

Especially a better visitors locker room than at the Coliseum.

“That locker room is so bad for the visiting team. It’s like putting 50 guys in a closet,” Carroll said. “You've got to give that to Al Davis. He reconstructed that when they were playing there back in the day to make it as miserable as possible on their opponent, and he got it done. I really didn’t realize how big of a factor it might have been over the years when we were there.”