Rams' Kupp stays grounded in a soaring start with Stafford 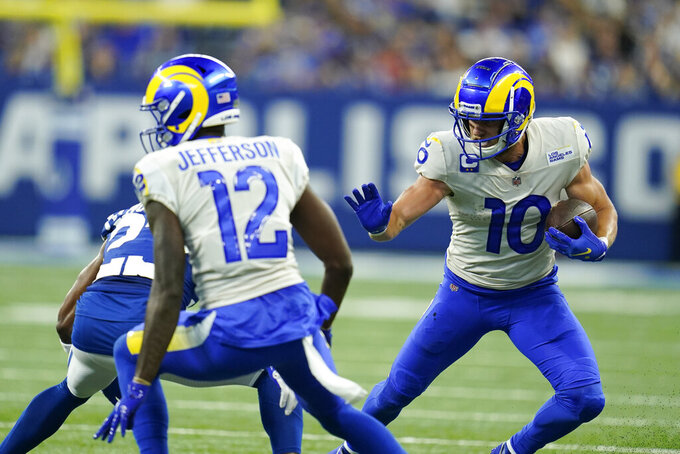 Los Angeles Rams' Cooper Kupp (10) runs during the first half of an NFL football game against the Indianapolis Colts, Sunday, Sept. 19, 2021, in Indianapolis. (AP Photo/Michael Conroy)

THOUSAND OAKS, Calif. (AP) — Cooper Kupp realizes he isn't in charge of how high he sits on the NFL's receiving charts, so he isn't terribly impressed by his lofty perch early this season.

When Kupp isn't getting many targets, the Los Angeles Rams receiver focuses on blocking, acting as a decoy or doing anything else to create space and time for his offense.

And when a quarterback is getting the ball to him with the frequency of Matthew Stafford for the unbeaten Rams this season, Kupp doesn't track his stats or respond to his mentions on Twitter, even though he's getting love for the thousands of fantasy football victories he's delivering.

“I try to keep a clear mind, stay off of all the social media stuff,” Kupp said with a grin Wednesday. “When I get home, I've got a couple of hours to spend with my kids, so I try to stay off the TV, too. The clearer the mind, the better it is for me.”

Another thing that's increasingly clear is Kupp's status as an elite NFL receiver. The fifth-year pro is tied for the NFL lead with 16 catches, and his 271 yards are third in the league, as are his three touchdown receptions.

His receiving partnership with Robert Woods has been one of the NFL's best for five years now, but Kupp is on center stage as the Rams (2-0) host the defending Super Bowl champion Tampa Bay Buccaneers (2-0) on Sunday in a marquee early-season matchup.

Kupp and Woods tore up the Bucs last year during Los Angeles' 27-24 win at Tampa Bay. Kupp had 11 catches for 145 yards, while Woods went off for 12 catches, 130 yards and a touchdown.

Kupp hopes to make a similar impact on Sunday's game, even if it's not borne out in numbers.

“Everyone expects to go out there and produce, and sometimes that production looks differently,” Kupp said. “Sometimes it shows up in the box score. Sometimes it doesn't. The goal is to always be a positive, whatever you're asked to do. If it's getting someone else open, if it's drawing coverage, if it's blocking, everyone wants to be a positive, moving our offense forward. These last couple of weeks, and last year against the Bucs, it showed up in the box score.”

Kupp has been a steady, productive wideout when healthy for his entire career, exceeding most expectations for a third-round pick out of Eastern Washington. He has been a mainstay of the Rams' offense under coach Sean McVay, who arrived in Los Angeles a few months before Kupp and immediately identified multiple ways to maximize Kupp's strengths.

But even McVay is struck by how prolific Kupp has been in his first two games with Stafford, the veteran quarterback who replaced Kupp's good friend, Jared Goff.

“I think Cooper has done a great job maximizing his opportunities,” McVay said. "Matthew has done a really good job of getting the ball where the coverage dictates ... (but) Cooper has demonstrated why he’s a special player in this league the last couple of weeks. I’ve been pleased with that.”

Kupp was a monster last weekend in Indianapolis, racking up nine catches for 163 yards and two touchdowns. He has begun his partnership with Stafford by posting his first back-to-back 100-yard receiving games since early in the 2019 season, which he finished with a career-best 94 catches for 1,161 yards and 10 touchdowns.

Kupp plays in the slot, but not exclusively — nobody does the same thing on every play in McVay's offensive schemes, and Kupp frequently lines up within touching distance of the offensive line, among other roles. He excels at making tacklers miss after getting the ball in space: He is third in the NFL in yards after the catch (146) this season after finishing fifth in 2020 and 11th in 2019.

Kupp will do whatever is asked Sunday at SoFi Stadium, but his early connection with Stafford suggests the ball should be in his hands if the Rams intend to keep up with the champs.

“We have a ton of belief in ourselves and what we’re able to do when we step on the field,” Kupp said. “It’s going to be a great matchup.”

NOTES: McVay missed the Rams' walkthrough and practice Wednesday due to illness. The coach is testing negative for COVID-19, the Rams said. Coordinators Kevin O'Connell and Raheem Morris ran the workouts in his absence. McVay is continuing with off-the-field preparation for Sunday. ... RB Darrell Henderson (ribs) and LB Leonard Floyd (ankle) missed practice. McVay has already said Henderson might not play this week — and even if he does, Sony Michel will get more game action after playing sparingly in his first two games with Los Angeles.