Rams' Shields fights back from concussions to 2nd Super Bowl 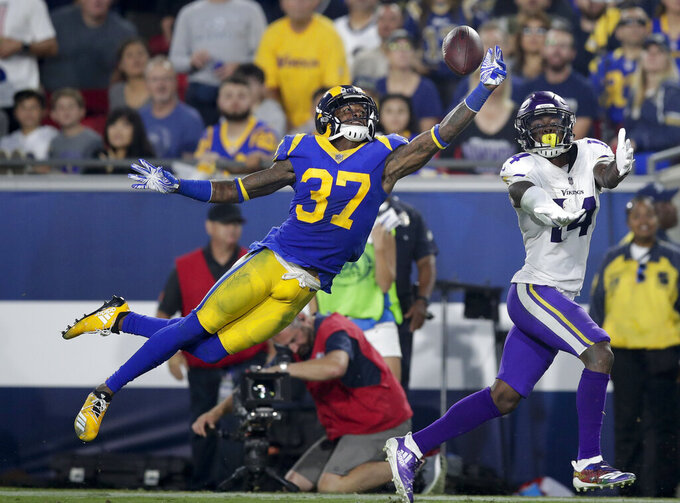 FILE - In this Sept. 27, 2018, file photo, Los Angeles Rams defensive back Sam Shields, left, breaks up a pass intended for Minnesota Vikings wide receiver Stefon Diggs during the first half of an NFL football game in Los Angeles. Shields is one of just four Rams who has played in the Super Bowl before. He finds the privilege even sweeter the second time around. In that big game against Pittsburgh eight years ago, Shields won a ring as an undrafted rookie defensive back making plays for Green Bay. He eventually became a Pro Bowl cornerback for the Packers before a fairly innocuous tackle in the 2016 season opener changed his life. (AP Photo/Jae C. Hong, File)

ATLANTA (AP) — Sam Shields is one of just four Los Angeles Rams who has played in the Super Bowl before. He finds the privilege much sweeter the second time around.

In the big game against Pittsburgh eight years ago, Shields won a ring as an undrafted rookie defensive back making plays for Green Bay. He eventually became a Pro Bowl cornerback for the Packers before a fairly innocuous tackle in the 2016 season opener derailed his life.

Shields' fourth recorded concussion kept him out of football for nearly two full years. After months of pain and grueling rehabilitation, he joined the Rams last spring and gradually made one of the most unlikely comebacks on either roster at this Super Bowl — a former defensive star now thriving as a key special-teamer and steady veteran for Los Angeles.

Shields wants to beat New England on Sunday to earn a second ring, which would put him in elite NFL circles. But he is also proud of his ability simply to stay in the game.

"It never crossed my mind that I could go this far," Shields said. "I was definitely out of it, in a dark situation. At first, it was tough. Now I'm getting rewarded."

Shields sought refuge in darkened rooms for months on end after his injury, unable to alleviate his pounding headaches any other way. He needed extensive, complicated rehab at UCLA before he could even contemplate a return to regular life, let alone football.

Shields was unable to handle bright lights or any prolonged mental concentration, let alone an NFL career. He went through months of physical and mental exercises, gradually healing his brain.

He chuckles at the memory of running on a treadmill while "being asked a million questions so that I would remember how to cope while I'm tired. It's just training your brain to get back and rolling again, because I was in a dark moment. My brain wasn't alive."

Even after turning a corner on his health following months of guidance from UCLA's doctors, the former Pro Bowl cornerback thought for several more months about quitting his sport.

He just couldn't do it, even after so much physical agony and soul-searching. He had to play again, even if another hit could take him back to the start — or even deeper down.

"He loves the game," Rams general manager Les Snead said. "He can't live without it. He could have easily moved on to that next chapter, but there was that itch inside."

Shields has recounted the details of his rehabilitation before, but he is more interested in focusing on its success. He hasn't missed a game for the Rams this season, contributing as a backup on defense while gladly playing a major role on the Rams' vaunted special teams.

Shields' daughters weren't old enough to enjoy his first Super Bowl trip. They know what's happening this time around — and unlike his injury, Shields is eager to share this experience with them.

"That's a really unique dude," Rams cornerback Marcus Peters said. "I really respect everything he's been through. He's an amazing father, an amazing person. You've just got to have ultimate respect for a guy who started off his career as a Pro Bowler and just killing the league. He went through the little concussion thing, and when you love and care about the game as much as you do, to see him come back and be the same explosive player that he was in the past, you just salute him."

Even when he was a Pro Bowl cornerback, Shields didn't look down on the dirty work of kick coverage. He realizes a big play on special teams can have a major impact on a game, just like he had two weeks ago.

During the second quarter of the NFC championship game in New Orleans, Los Angeles was down 13-0 with a stagnant offense. That's when Johnny Hekker threw a pass to Shields , a receiver at the University of Miami until his senior season, for a first down. The perfect fake punt, which included a clever juke by Shields to pick up the first down, prolonged the Rams' first scoring drive.