Ravens' defense capable of carrying them with Jackson hurt 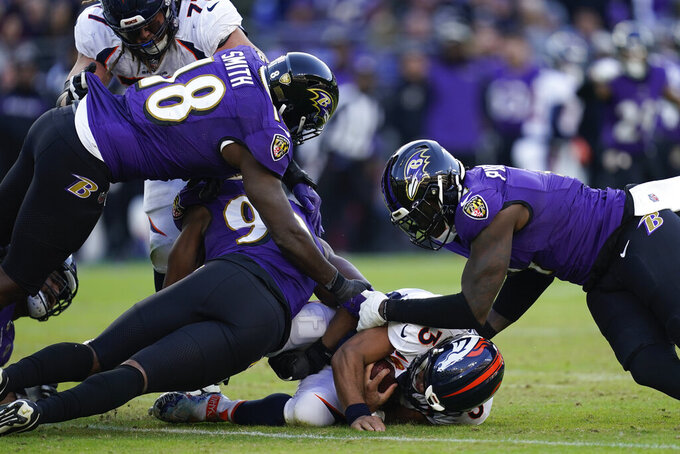 Lately, that unit has been up to the challenge.

Jackson missed practice Wednesday — no surprise following his knee injury in last week's win over Denver — and it looks more and more like the Ravens will have to rely on backup quarterback Tyler Huntley for at least their game at Pittsburgh on Sunday. However, Baltimore has held two of its last three opponents without a touchdown. If that keeps up, the Ravens can still win despite their offensive concerns.

“Those guys get paid too over there, to score, so when you keep them from scoring, which is the objective of the game, it feels good for us,” safety Chuck Clark said. “We feel like we did something, but at the end of the day, we know we've got to keep stacking those.”

The Ravens rank 13th in the NFL in total defense, but the advanced stats tell a more promising story. They're ninth on that side of the ball in Football Outsiders' DVOA stat — sixth against the run and 11th against the pass.

Baltimore has come a long way since Tua Tagovailoa and the Dolphins scored 28 points in the fourth quarter to beat the Ravens 42-38 in Week 2. The Ravens have added players like Roquan Smith and Jason Pierre-Paul and welcomed back Tyus Bowser from an injury. In its past nine games, Baltimore has allowed an average of just 288 yards.

The Ravens signed Pierre-Paul in late September, but the biggest move came about a month later when Smith arrived in a trade from Chicago. Baltimore's linebacking corps suddenly looked much different when the Ravens beat New Orleans 27-13 on Nov. 7. That was Bowser's first game back and Smith's debut with his new team.

Since then, the Ravens have a 13-3 win over Carolina, a 28-27 loss at Jacksonville and a 10-9 victory over Denver. A poor fourth quarter against the Jaguars is all that prevented this from being a truly exceptional stretch for the defense.

The quality of the competition hasn't been great, but Baltimore isn't about to be picky about where the wins come. The next four teams on the schedule are all under .500, and for however long Jackson isn't playing, the defense will try to pick up the slack. The offense was already in a bit of a rut even before Jackson was hurt.

Smith is one of three defensive players in the league with at least 100 tackles and three sacks this season.

“Roquan has played at a very high level,” coach John Harbaugh said. “All the guys have played at a high level on defense of late. He’s obviously been a little bit of a spark for us, too, I think you could say that for sure. I love him. I love the fact that he’s here and love his attitude and everything.”

There are other elements of Baltimore's defense that have come on strong lately. The Ravens have 37 sacks, ranking fifth in the NFL, and linebacker Patrick Queen has made big strides in his third season.

Queen was limited in practice Wednesday because of a bruised thigh, but the fact that he was out there at all was a good sign after he was carted off in Sunday's game.

“I could barely walk that day, but every day has been a step forward,” Queen said. “I'm just still getting treatment right now, still hoping to get back out there.”