Ravens QB Jackson comfortable being face of the franchise 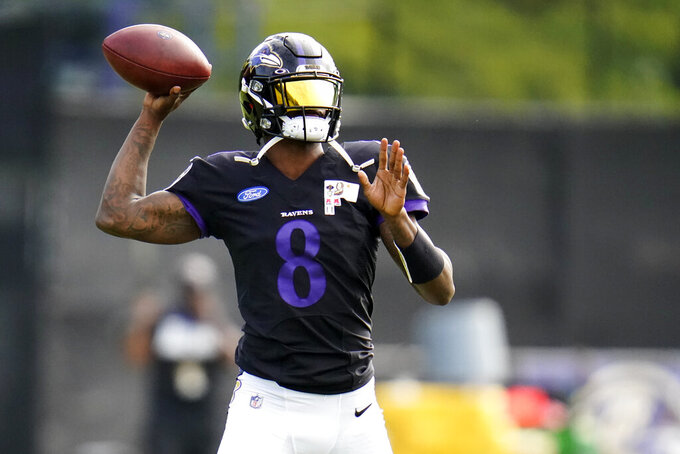 OWINGS MILLS, Md. (AP) — There was a time when the Baltimore Ravens were known for a ferocious defense led by the team's most prominent player, future Hall of Fame linebacker Ray Lewis.

These days, the face of the Ravens is quarterback Lamar Jackson, the reigning NFL MVP and catalyst of a record-setting offense.

Which explains why star linebacker Matthew Judon scoffed at the notion that wearing the franchise tag makes him Baltimore's most notable player.

In his first full season as a starter, Jackson set an NFL record for yards rushing by a quarterback with 1, 206. He guided a unit that led the league in scoring and racked up an NFL-record 3,296 yards rushing. Oh, and Jackson also threw for 3,127 yards and 36 touchdowns.

The 23-year-old Jackson doesn't bask in the many accolades that have been foisted upon him, but Judon's assessment was meaningful in that it came from a teammate.

“I appreciate that coming from my peers, especially because we grind so hard together and our goal is to win championships," Jackson said Tuesday following the team's second practice in full pads. “For guys to look at like that, me being so young, to be like the franchise guy, I appreciate that. I just know I’ve got to keep doing what I’m doing and keep trying to build up and bring a championship home."

Jackson's pursuit of a Super Bowl ring keeps him motivated, especially because his two forays into the postseason ended in defeat. He worked this offseason to improve his long passes, in part because there's really absolutely nothing wrong with his running ability and his short passing game is fairly solid.

Jackson led the Ravens to a 14-2 record and was a worthy MVP, but a loss at home against Tennessee in Baltimore's playoff opener left the 2016 Heisman Trophy winner looking for more.

“We’re building a lot from last year. We’re doing a lot better, especially with deep passes," he said. “We’ve got to keep going, keep building and keep getting better every day to take advantage of this time right now."

Jackson is admired by his teammates and coaches not just because of his ability, but for his attitude.

“He’s the whole package in terms of who he is and how he plays," coach John Harbaugh said. “He’s been very consistent in what he’s been doing, but he’s also focusing on improving across the board. He’s working hard as always; that’s what you appreciate about Lamar."

Not everyone is suited to handle the responsibility of being the team's most important player, but Harbaugh know Jackson embraces the distinction.

“He loves that because he’s in the middle of it. He loves the guys, he loves practice, he loves meetings," Harbaugh said. “That’s just his personality and the way he lives. He’s a competitor, he’s fun to be around and he loves to win. Those are all good things."

After coming to the Ravens from the Rams last October, cornerback Marcus Peters had 39 tackles and three interceptions for a defense that ranked fourth in the league. Peters is OK with the defense playing a supporting role to this prolific offense because he knows talent and drive when he sees it.

“He’s not the MVP for no reason. He goes out there and makes the plays," Peters said. “He’s a smart guy. He attacks the game the right way, and it means something to him. You don’t find too many quarterbacks who love to play the game like him. The ones who do, you see what they do — they put a product on the field that’s remarkable, man."