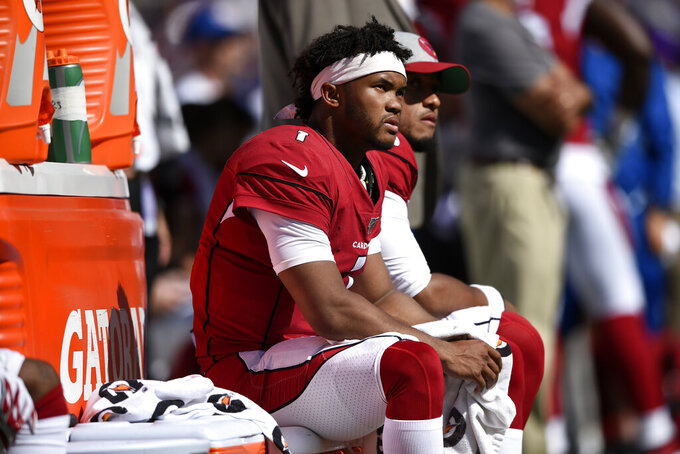 Most of the time.

But there have been some problems — especially in the red zone — and that's a big reason the Cardinals (0-1-1) are still searching for their first win of the season after losing to the Baltimore Ravens 23-17 on Sunday.

Arizona had to settle for field goals three times despite advancing the ball inside Baltimore's 5-yard line. That's obviously not ideal. Kingsbury's charge is to find answers.

"Kyler's a rookie quarterback, this is my first time calling plays in the league, so I have to wrap my mind around that and find matchups and find concepts that work and we can be efficient at," Kingsbury said on Monday. "I obviously haven't done a great job at that so far."

When the Cardinals get going, the offense is really fun to watch and effective.

Murray completed 25 of 40 passes for 349 yards, becoming just the second quarterback in NFL history to throw for at least 300 yards in his first two games. The other was Cam Newton.

Kirk, in his second season, had six catches for 114 yards. Fitzgerald, who never seems to age despite this being his 16th season in the NFL, continued his great start with five catches for 104 yards. Damiere Byrd, KeeSean Johnson and Michael Crabtree give the receiver group plenty of depth.

The defense hasn't been perfect, but it's kept the Cardinals competitive. Baltimore's Lamar Jackson had big numbers — 272 yards passing and 120 yards rushing — but the Cardinals held the Ravens to two field goals in the second half, which gave the offense a chance to climb back into the game.

RB David Johnson missed part of the first half with a wrist injury, but returned and finished with seven carries for 14 yards and a touchdown. The Cardinals ran for just 20 yards as a team.

Kingsbury has said he'd like the offense to have some balance, but on Sunday the Cardinals threw 40 times and ran just 11 times.

Part of the reason is because Arizona was playing from behind for the second straight week and needed to try and score points in a hurry, especially during the second half. But 20 yards on the ground probably won't get it done, especially when there's an option like Johnson.

"We've got to get him going early and into the game more," Kingsbury said.

Kirk showed promise during his rookie season in 2018 after catching 43 passes for 590 yards and three touchdowns in 12 games. He's on pace to blow past those numbers, and it's obvious the former second-round pick will be an important part of the offense going forward.

RT Justin Murray was pushed into a surprise starting role during the first two weeks after Marcus Gilbert was lost for the season because of a knee injury. Murray has been OK considering the circumstances, but Kingsbury doesn't seem certain that he's the long-term answer at the position.

The Cardinals have stayed relatively healthy through the season's first two weeks. Kingsbury said Johnson (wrist) should be "good to go" despite his leaving for part of the first half. The coach also said backup offensive lineman Lamont Gaillard (knee) is getting closer to playing after missing the first two weeks.

20 — The Cardinals had 20 yards rushing on Sunday. This is probably going to be a passing-focused offense, but they still have to find a way to run more often and more effectively.

The Cardinals have been an entertaining team through two games and there are reasons to be optimistic about the future. But if this group is going to make any noise in the standings this season, it's crucial to get wins over the next two weeks with home games against the Carolina Panthers and Seattle Seahawks.