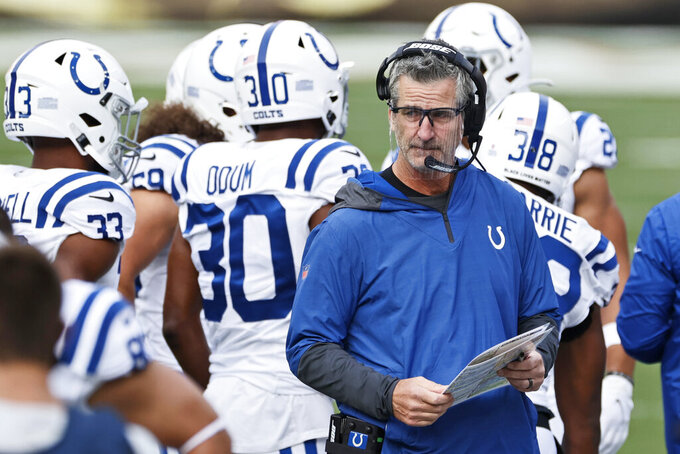 CLEVELAND (AP) — Philip Rivers was brought to Indianapolis because of his poise and pedigree. He'd help the Colts stay competitive, keep winning.

On Sunday, his mistakes cost them dearly.

Rivers had an interception returned for a touchdown and was called for intentional grounding on a throw from the end zone for a safety in the fourth quarter as Indianapolis was beaten 32-23 by the Cleveland Browns.

Signed to a one-year, $25 million free agent contract in March after 16 seasons with the Chargers, Rivers threw two interceptions and missed on several other throws as the Colts (3-2) had their three-game winning streak snapped by the 4-1 Browns.

“Certainly not the way we thought it was going to go today,” Rivers said. “But it did.”

The Colts were down 10 in the third quarter when Rivers stepped up in the pocket and was late on a crossing pattern to wide receiver T.Y. Hilton near Cleveland's sideline. Safety Ronnie Harrison stepped in front, picked off Rivers' throw and returned it 47 yards for a touchdown.

Later, Rivers was under pressure in the back of the end zone from Browns star end Myles Garrett and hurriedly flung the ball out of bounds to avoid a sack without a receiver in the area. The safety put Cleveland up 29-20.

“The interception for a touchdown killed us," said Rivers, who finished 21 of 33 for 243 yards and the two picks. “The other one I’d like back, too. Then obviously, the safety hurt as well. The offense gave them nine points.”

Those aren't the kind of errors the Colts expected from a proven, 38-year-old quarterback like Rivers. But coach Frank Reich wasn't pointing any fingers afterward.

“You lose a game like this, and we all share in it,” Reich said. “Everyone shares in it.”

Indy's top-ranked defense was shredded by Browns quarterback Baker Mayfield in the first half before clamping down, and there were other missed assignments — like returner Nyheim Hines fair catching a punt inside the 5-yard line before the safety — so it wasn't all Rivers' fault.

But his miscues stood out. They always do for the starting quarterback.

"You take that away and you get that one mistake, in my mind, that was the big factor. That mistake was not the big factor, the safety, but the one big mistake with Philip was the interception. That is it.”

Reich explained that he shouldn't have put Rivers in a position to throw on first down with the ball backed up near the goal line. The Colts were supposed to “chip” Garrett on his rush, but that didn't happen and he got close enough to force Rivers into a bad choice.

“We had a play that we really liked, and I got a little too aggressive with the call,” he said. “Normally, with that field position, eight of 10 times, I’m probably not making that call, but I just felt like if we got it right, it would be a big chunk and get us out of that hole, so that is on me.”

After the safety, Rivers again stepped up in the pocket and forced a throw over the middle to tight end Mo Alie-Cox. Rivers never saw Browns safety Sheldrick Redwine, who came up with a big interception.

Rivers had started well. He completed a couple chunk plays in the first half, but Indy's offense never really found its rhythm.

The Colts could have been done after Harrison's TD, but Isaiah Rodgers returned the ensuing kickoff 101 yards for a score — the longest play in the league this season.

“We made a few plays here and there in the second half but just not consistent enough — again, with the pick-six and the safety,” Rivers said. "Great job with our special teams and the kick return. We just couldn’t overcome it. We just weren’t good enough today.

"I don’t really have a lot of words to explain it, other than we weren’t good enough. Those things happen, and you regroup and go on to the next one.”