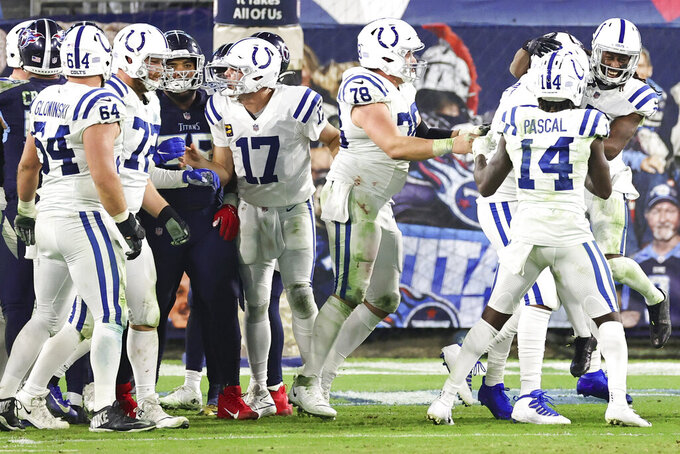 The Indianapolis Colts celebrate a touchdown during an NFL game against the Tennessee Titans, Thursday, Nov. 12, 2020 in Nashville, Tenn. The Colts defeated the Titans 34-17. (Margaret Bowles via AP)

He's completing passes, avoiding turnovers and developing a rapport with four-time Pro Bowler T.Y. Hilton. The wins are adding up, too, and a few more could put Rivers and the Indianapolis Colts back in the playoffs.

So, naturally, the 39-year-old Rivers sees Sunday's AFC South showdown with Houston as another chance to show everyone he's still got it.

“To be in December and to have a chance and to be playing meaningful football, I don’t know if that was the expectation but that was certainly the hope and the desire," Rivers said, explaining why he signed with Indy in March. “Here we are.”

For the 39-year-old Rivers, this is familiar territory — making a playoff push and a potential Super Bowl run. But the Texans (4-9) understand something else: Indy might be playing its best football, as they learned two weeks ago in Houston. The Colts have won two straight and four of six, while the Texans' lackluster performance last week against Chicago creates concern for interim coach Romeo Crennel.

“They’re playing for the division lead, so they’ll bring all of their guns into this game and they’ll be ready to go," he said. “As far as the way that we will respond, I hope we will respond like we did two weeks ago and play a tremendous game."

Rivers has been hot, too. In the last eight games, he has thrown four interceptions and 16 TD passes, including four straight games with at least two scores. If he gets three more in his 238th consecutive start, he would tie Hall of Famer Dan Marino (420) for fifth on the league's career list for TD passes.

And Rivers has plenty of help around him.

Rookie running back Jonathan Taylor has rushed for 90 or more yards in four consecutive games and Hilton has three straight games with 80 yards receiving, including an eight-reception, 110-yard, one TD performance at Houston.

To Rivers, it's no surprise.

“We’re on a mission and we have our mindset and goals for what we want to accomplish," he said. “It’s what we’ve been hired to do for lack of a better word. But it's the people (in the locker room) that make it special."

After giving up five sacks to the Colts, Chicago had six last week. Deshaun Watson has gone down 39 times, third most in the NFL, and each of the last two opponents have recorded a safety.

“I’m definitely concerned about that because one, you don’t want to give up sacks," Crennel said. “You talk about your quarterback getting beat up – you don’t want that to happen. Everybody is involved, but most of it is on the offensive line because they’re the ones who are tasked with the responsibility to protect the quarterback."

When the teams last met, Colts defensive end Justin Houston made three sacks and got the fourth safety of his career to tie a league record.

Houston, the 2014 NFL sacks champ, begins this week needing three sacks for 100 in his career. And if another safety would not only give him the all-time record, it would also give him a record-breaking third this season. Nineteen players have two in one season.

Watson won't make it easy, though.

“He’s pretty special," defensive coordinator Matt Eberflus said. "We just have to stay after him, do some different things with games and stunts, and maybe bring some more pressures.

RB David Johnson returned to practice this week and is expected to play after missing the Bears game because he was deemed a “close contact” with someone who tested positive for COVID-19. Johnson was acquired in the DeAndre Hopkins trade and has struggled in his first season with the Texans.

Johnson missed three games with a concussion and has 452 yards rushing on a team running for a league-low 86.2 yards per game. As a result, the Texans have had to rely more on Watson.

“We know what he’s capable of and we’ve had success throwing the ball and not as much success running the ball,” Crennel said. “Sometimes when you’re doing something you feel is successful, you keep doing it.”