Robert Griffin III still has designs on playing in NFL 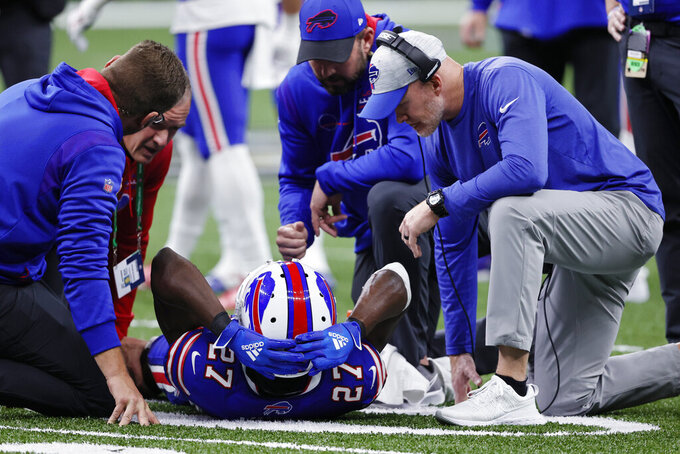 An injured Buffalo Bills cornerback Tre'Davious White (27) is helped by head coach Sean McDermott, right, and medical staff in the first half of an NFL football game against the New Orleans Saints in New Orleans, Thursday, Nov. 25, 2021. (AP Photo/Butch Dill)

Robert Griffin III is still training to play in the NFL while enjoying his duties as an ESPN college football analyst.

RG3 may have even found a way to be in two places at once.

The 2012 AP NFL Offensive Rookie of the Year is an investor in holographic telepresence startup PORTL Inc. The company’s first product, the Epic PORTL Hologram Machine, allows people to beam in from remote locations for human-sized, life-like interactive communication.

“Maybe I can call the game from the hotel room with the team,” Griffin joked. “But, seriously, PORTL is the wave of the future. ... This is an opportunity not only to affect the market of advertising, marketing, to beaming people different places for concerts or for meetings. It’s not just really cool, but it’s practical. ... People have told me since I turned pro there’s nothing more valuable than your time. So instead of having to fly all the way across the world to go to China or go to Switzerland, or to go to Europe, wherever, you can just beam yourself over there. Instead of having to spend all this money to do these different advertising things, you can literally invest in this PORTL device and do all your advertising in one spot and make it come to life.”

Griffin spent the previous three seasons in Baltimore. He got two starts backing up Lamar Jackson in 2019-20. Though he’s doing well in his current role, the 31-year-old still wants to play in the NFL.

“Yes, there is still an itch to play,” Griffin said on the AP Pro Football Podcast. “I don’t shy away from that. I schedule my week as if I’m with the team.”

Griffin says he works out Mondays, watches films Tuesdays and throws on Wednesdays, Thursdays and Friday.

“My job right now at ESPN is to be the best analyst I could possibly be calling college football games and eventually NFL games, and I’m doing NFL analyst work right now,” he said. “But when that call comes and a team needs me, I’ll be ready to go. Am I getting calls? Yes, I’m getting calls. Have they pulled the trigger? No, they haven’t. So for me, it’s just about making sure you stay ready so you don’t have to get ready.”

“When I was playing, we always missed holidays, special events for families and I always wished I could’ve been there,” Lynch told the AP. “Now, I can be two places at once. I wish I could have done this my whole career and been a part of birthday parties and graduations and all the things I missed in preparation for a game or to be at a game.”

Buccaneers tight end Rob Gronkowski will be honoring the USO on his cleats for this year's NFL My Cause My Cleats campaign.

Inspired by the service and sacrifice of military service members and their families, Gronkowski also is starring in a video that gives an inside look at the inspiration for the cleats' design, and at the “unboxing.” Gronkowski, in partnership with USAA, also coordinated a surprise for a USO military family, the Jasens.

The cleats were designed by Marcus Rivero, who is better known as Soles by Sir. The cleats honor the USO and the Jasen family, along with the Gronk Nation Youth Foundation.

Thanks to the evolution of sports science, and concessions to the players’ union, NFL teams don’t practice nearly as intensely in the past. Even though they’re typically playing at least four more games as a pro than they did in college, the rookie wall isn’t what it once was due to the way coaches manage their practice sessions to keep players as fresh as possible down the stretch.

“It’s so big of a difference. That’s why I love this league so much, the practice style not being so intense,” said Minnesota Vikings wide receiver Justin Jefferson, who’s in his second NFL season. “College practices are always intense, always high energy, everybody’s going 100%. It’s like that in the NFL, too, but people know how to take care of their bodies, know how to practice and know what speeds to go at. We all take care of ourselves. In college it’s lifting heavy weights. The NFL is more laid back.”

For coaches who came up through the game in a different era, it’s still an adjustment.

“We do have some older players that we have to take care of, but there’s a fine line with some of the young guys that are playing so they don’t get as good a work as they would,” Vikings coach Mike Zimmer said, adding: “They’ve been emptying their buckets for me and for them each and every week, so I’m trying to take care of them so they can do that again on Sunday.”

Zimmer confers regularly with head athletic trainer Eric Sugarman and head strength and conditioning coach Josh Hingst about how to handle the workload.

“I have two little angels or devils or whatever they call them on my shoulders, you know?” Zimmer said. “Usually I’m the one saying the opposite most of the time.”

Though sidelined by a season-ending knee injury, cornerback Tre’Davious White’s spirits were lifted discovering the strength of the Bills Mafia’s giving power.

The Bills' fan base rallied in the wake of White getting hurt last week by donating more than $108,000 through Wednesday to the Food Bank of Northwest Louisiana, which is based in the player’s hometown of Shreveport.

“I am at a loss for words for what the Bills Mafia has done for me and my hometown,” White said in a statement released by his agent. “It truly means the world to me to have my fans support me in this way, by giving back to my community.”

White was hurt in a 31-6 win over the Saints on Thanksgiving night, in the fifth-year player’s first pro game in his home state.

Many of the donations came in at $27, representing White’s jersey number. The push for donations was prompted by a tweet from the BillsMafiaBabes account on Tuesday, which read: “This one hurts. It hurts a LOT. What better way to show you love for our CB1 than to honor him on this giving Tuesday by giving to @FoodBankofNWLA in his name.”

White is the latest player to be wowed by Bills Mafia’s generosity.

The group previously flooded donations to Buffalo’s Oishei Children’s Hospital on behalf of Bills quarterback Josh Allen following the death of his grandmother last year. Four years ago, Bills fans donated more than $300,000 to Andy Dalton’s charity after the former Bengals quarterback led Cincinnati to a last-minute, season-ending win over Baltimore, which clinched Buffalo its first playoff berth since 1999.

Detroit Lions safety Tracy Walker is participating in the NFL’s “My Cleats, My Cause” campaign to honor his late cousin, Ahmaud Arbery, while hoping to raise funds and awareness for Black Lives Matter.

“I know everybody says all lives matter, but in that situation, I want to represent my cousin,” said Walker, who will wear cleats that include Arbery’s likeness on Sunday against the Minnesota Vikings.

Three men were convicted of murder in the killing of Arbery last week.

Arbery was a Black man, running empty-handed through a Georgia subdivision when white strangers chased and trapped him on a quiet street before killing him with a shotgun in February, 2020. While Walker laments nothing can bring his cousin back, he’s trying to do what he can to affect change about racial justice.

The Houston Texans partnered with several companies this week to award $400,000 in grants to nonprofit organizations that support social justice and racial equity efforts in Houston.

More than 100 grant applications were submitted, and a committee led by Hannah McNair, vice president of the team’s foundation and wife of team owner Cal McNair, chose 15 organization to receive the funds.

“The organizations’ unwavering commitment to Houston’s youth and their families is unmatched, and we’re proud to help them continue to make a positive impact on the next generation,” Hannah McNair said. “We know that it takes all of us to inspire change and we are looking forward to seeing their continued work to reduce barriers for so many in our community.”

The money was distributed from the Inspire Change Grant Fund created in September.

The grants, which ranged from $10,000 to $50,000, will be used to support a variety of social justice initiatives, including health advocacy, criminal justice reform, homelessness, youth development, education and mental health.

The largest grant of $50,000 was awarded to the SHAPE Community Center, which works to improve the life of people of African descent. The money will be used for youth leadership programs and a week-long summer tour that will take students through the South to sites central to the civil rights movement.

A $35,000 grant was given to CY-Hope, which will use the funds to provide counseling and speech therapy to children and families in need.

The Inspire Change initiative was introduced by the NFL in 2019 to help local communities and support programs that reduce barriers. The Texans awarded $100,000 in grants in each of the first two years of the initiative before partnering with several businesses this year to help more organizations.