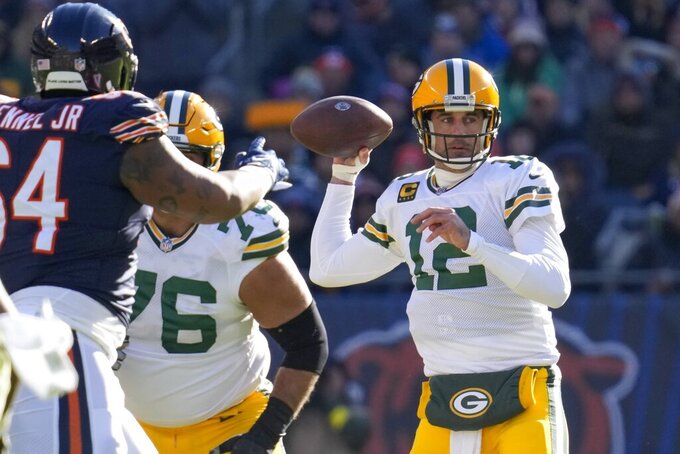 CHICAGO (AP) — Aaron Rodgers figured the Green Bay Packers were in a good spot and would find a way to pull out the win. Given his history against the Chicago Bears, it wasn't exactly a big leap of faith.

The Packers (5-8) looked like they were on their way to another loss after dropping seven of eight. They trailed by 13 in the second quarter and were down 19-10 through three before before outscoring Chicago 18-0 in the fourth on the way to their eighth straight win over their rival. The Bears (3-10) lost their sixth game in a row.

AJ Dillon ran for a 21-yard touchdown in the opening minute of the fourth. Mason Crosby kicked a 32-yard field goal to give Green Bay a 20-19 lead with just under five minutes left after Chicago's Cairo Santos had a 40-yard attempt blocked.

The Bears drove to the Packers 43 before Alexander stepped in front of a pass intended for Equanimeous St. Brown. Three plays later, Watson sprinted untouched to the end zone, leaping across the goal line with his arms spread. The Packers opted to go for 2, and Rodgers completed a pass to Mercedes Lewis, making it 28-19 with 1:51 remaining.

Fields was then intercepted at the Green Bay 5 by Keisean Nixon.

The Bears were left frustrated and vowing to do better after failing to convert late in a game yet again. Chicago has six losses by one score, and this was almost the seventh.

“You have to find ways to close games out,” coach Matt Eberflus said. “We’re excited about these next four games to get ourselves in position to do that. We were right there to get that done and we’ll get that done in the future.”

Rodgers didn't exactly dominate the Bears. But he showed he still owns them, as he shouted last year toward the crowd at Soldier Field.

Rodgers, who exited last week’s loss to Philadelphia with a rib injury and has been dealing with a broken right thumb since early October, improved to 25-5 against Chicago including the playoffs. The four-time MVP completed 18 of 31 passes for 182 yards and a touchdown.

“He always gives you confidence that we can go out there and execute whatever the play is,” coach Matt LaFleur said. “I thought our O-line was doing a great job and then his ability to extend plays, just have that poise to kind of hang in there and allow those guys to go off schedule and work gives me a lot of confidence.”

Watson had 48 yards receiving and a touchdown reception — the rookie's seventh in the past four games — to go with that huge run. Dillon ran for 93 yards, and the Packers moved ahead of Chicago for the NFL lead in regular-season wins with 787.

“It is crazy and it is awesome to be a part of. Most wins in football at this level, it is really an honor to be part of the Packers and be part of that winning tradition,” Dillon said.

Fields, who missed last Sunday's game with an injury to his non-throwing shoulder, ran for a 55-yard touchdown in the first quarter and finished with 71 yards on six attempts. That gave him six straight games rushing for at least 50 yards and one TD, the longest such streak by a Bear since Gale Sayers had six in a row in 1969.

Fields also threw a 56-yard pass to St. Brown that set up a 7-yard TD run by David Montgomery that made it 16-3 in the second quarter. Fields was 20 of 25 for 254 yards but threw two interceptions.

The Bears led 19-10 with 1:50 left in the third after Santos kicked a 28-yard field goal. The Packers pulled within two in the opening minute of the fourth on a 21-yard run by Dillon to cap a four-play, 82-yard drive aided by a pass-interference penalty against Jaylon Jones.

Then the Packers blocked Santos' kick to stay within two.

Crosby nailed a 32-yarder to give the Packers a 20-19 lead with 4:49 remaining after Rodgers failed to squeeze a 14-yard pass to Robert Tonyan in the end zone.

Packers: Rodgers said his thumb is “close to being a non-issue,” and his ribs probably will be, too, for Green Bay's next game in two weeks. ... RB Aaron Jones (shin) was hurt in the first half but returned.

Bears: TE Trevon Wesco (leg) was injured blocking on a run by Montgomery on the game's opening drive. ... FB Khari Blasingame missed the game because of an illness.

Packers: Have a bye, then host the Los Angeles Rams on Monday, Dec. 19.

Bears: Have a bye, then host Philadelphia on Dec. 18.