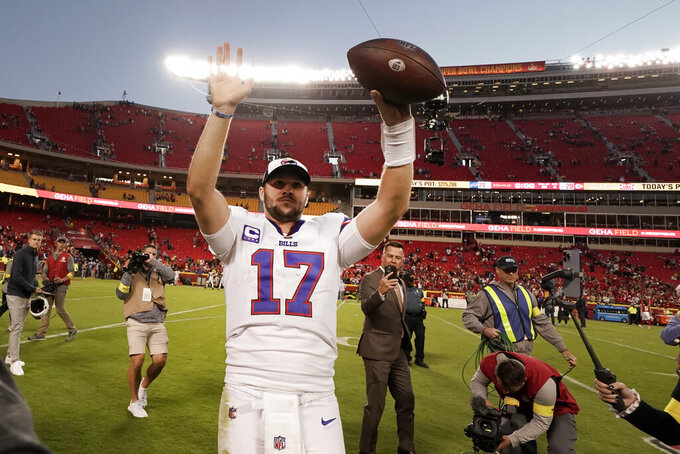 OPENING LINE: Bills by 10 1/2, according to FanDuel Sportsbook.

TURNOVER DIFFERENTIAL: Packers minus-4; Bills plus-3.

PACKERS PLAYER TO WATCH: CB Jaire Alexander. The fifth-year starter will likely line up against Stefon Diggs. Alexander struggled last week in being beaten by Terry McLaurin on a 37-yard touchdown that put the Commanders ahead for good, and a 12-yard catch on a third-and-9 conversion with just over two minutes remaining. Diggs ranks fourth in the NFL with 49 catches, second with 656 yards receiving, and tied for second with six TD catches.

BILLS PLAYER TO WATCH: LB Matt Milano. The sixth-year starter represents a dual threat in defending the run and pass. His 26 solo tackles lead the team.

KEY MATCHUP: Packers O-line vs. Bills D-line. Buffalo’s Von Miller-led pass rush has been able to apply pressure without having to blitz for much of the season and faces a potentially banged-up Packers offensive line that was missing starting left tackle David Bakhtiari because of a knee injury last week. QB Aaron Rodgers has been sacked just 15 times this season in part because of his ability to get the ball out quickly. Buffalo is tied for seventh in the NFL with 19 sacks.

SERIES NOTES: The Bills are 6-0 at home against Green Bay in which they have outscored the Packers by a combined margin of 148-73. ... The Bills are the NFL’s only team the Packers have never defeated on the road. ... In their previous meeting in 2018, Bills QB Josh Allen threw two interceptions and lost a fumble in making just his third career start in a 22-0 loss at Green Bay. ... In his only appearance at Buffalo, Rodgers went 17 of 45 for 185 yards passing with no touchdowns, two interceptions and was sacked for a safety with 1:51 left in a 21-13 loss in 2014.

STATS AND STUFF: Since 2020, Allen ranks first among NFL players with 106 touchdowns followed by Rodgers, who has 102, with Allen holding a 19-11 edge this season over Rodgers. ... Rodgers has won 13 consecutive prime-time starts. It’s the NFL’s longest streak since 1970 and goes back to a 37-8 loss at San Francisco on Nov. 24, 2019. ... In his past 18 night games, Rodgers has 45 touchdown passes and only four interceptions. ... According to Sportradar, the previous time the Packers were underdogs by 10 1/2 points or more was Nov. 26, 2017, when Pittsburgh was favored by 14 1/2 and won 31-28 over a Packers team that started QB Brett Hundley. ... Green Bay hasn’t been this big of an underdog in a game started by Rodgers or Brett Favre since Oct. 2, 2006, when Philadelphia won 31-9 as 11 1/2-point favorites over a Favre-led Packers team. ... The Packers are on a three-game skid, their worst in three-plus seasons under coach Matt LaFleur. ... OLB Rashan Gary has six sacks this season with at least one sack in five of seven games. ... Green Bay went 0 of 6 on third down last week, the first time the team has been blanked since 1999. ... The Bills have won at least five of their first six games of a season for the 12th time in team history. They’ve made the playoffs in 10 of those seasons with the exception of 2008, when Buffalo opened 5-1 before closing 2-8. ... Buffalo is 7-5 in prime-time games in five-plus seasons under coach Sean McDermott, including 2-0 this year. ... Diggs, who spent his first five seasons with Minnesota, faces his former NFC North rival for the first time since being acquired by Buffalo in a trade in March 2020. Diggs combined for 46 catches for 656 yards and eight TDs in nine games against Green Bay. ... Despite missing two games because of an injury, S Jordan Poyer is tied with Seattle rookie Tariq Woolen for the NFL lead with four interceptions. Buffalo leads the NFL with 10 interceptions. ... The Bills have outscored opponents by a combined 84-17 in the second half. The Packers have led or been tied at halftime in each of their past three games.

FANTASY TIP: The Bills might not run much, though that shouldn't mean benching RB Devin Singletary. He'll face a defense that's allowed at least 125 yards rushing in six of seven outings, including a combined 637 in its previous four.