Simmons had enlightening offseason despite no new contract 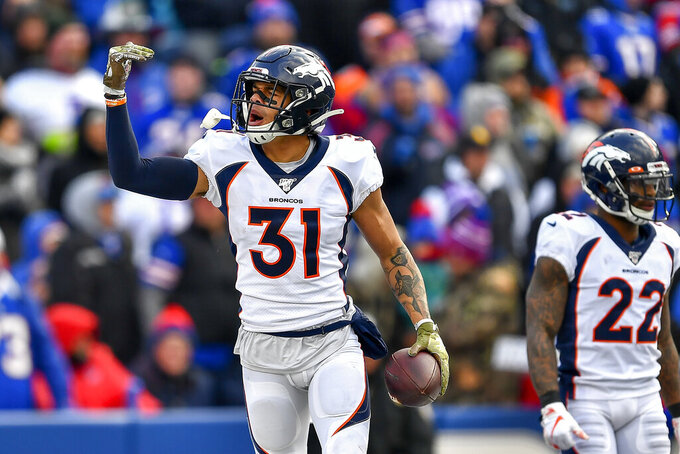 FILE - In this Sunday, Nov. 24, 2019 file photo, Denver Broncos free safety Justin Simmons (31) reacts against the Buffalo Bills during the second quarter of an NFL football game in Orchard Park, N.Y. Justin Simmons had an eventful offseason, finding his voice during peaceful protests of racial and social injustice from his hometown in Florida to downtown Denver. The fifth-year safety and first-time All-Pro also failed to reach agreement on a long-term contract with the Broncos, so he's playing under the franchise tag in 2020.(AP Photo/Adrian Kraus, File)

ENGLEWOOD, Colo. (AP) — A breakout 2019 season garnered Justin Simmons his first All-Pro nod and the Denver Broncos’ franchise tag. So, he was counting on two things in the offseason: laying low and signing a big contract.

The coronavirus pandemic quashed his expectations of a big extension.

In late May, Simmons attended a march in Stuart, Florida, near his hometown of Port Salerno following Floyd’s death in police custody in Minneapolis that sparked worldwide protests.

Simmons stepped into the bed of a pickup, grabbed a microphone and addressed hundreds of protesters about to cross the Roosevelt Bridge, telling those who didn’t know him that he plays in the NFL.

“But that is not who I am. I am a bi-racial human being. I understand the pain that both sides are dealing with,” said Simmons, whose father is Black and mother is white. "We are fighting for equality, not superiority,” Simmons said, adding, “All lives matter when Black lives matter.”

Simmons would repeat those themes in June when he and dozens of his teammates gathered at a peaceful protest in downtown Denver.

He said Thursday that those moments made him realize what a powerful platform professional athletes have in fighting for a cause.

“I learned that it’s important to not just keep those things between myself, close friends and family but to really be able to speak up and speak out on some of those things because it is important and it does matter,” Simmons said.

Another lesson he learned this summer was that the future holds no guarantees.

Six months ago it seemed a safe bet that Simmons would follow in the footsteps of Matt Prater, Ryan Clady, Demaryius Thomas and Von Miller, the four players who had previously been tagged by general manager John Elway. All four signed long-term deals before the deadline.

The COVID-19 crisis changed everything, and NFL teams got nervous about the impending financial hits and salary cap constraints, leading most franchised players to sign their one-year deals last month.

For Simmons, that was worth $11.44 million, still a significant bump from the slightly more than $3 million in career earnings he's made in four NFL seasons.

“We worked with Justin,” Elway said last week. “There were some concerns on our side as far as what was going to go on and where the cap was going to be. We had discussions with (President and CEO) Joe (Ellis) on how far we wanted to go and how much guaranteed money we wanted to get to. That was a concern with all the unknowns we had. Plus, our numbers were far apart, too. It just didn’t feel like we were going to get there, so we didn’t get there.

“Hopefully, with what we think of Justin, we can get something done next year in the offseason, and we’d like to make him a Bronco for a long time because he’s the type of person that we want.”

Simmons said the feeling is mutual.

“That still stands on my end, too,” Simmons said. “I’d love to be able to be here and continue to keep growing and doing the things that I’ve been doing.”