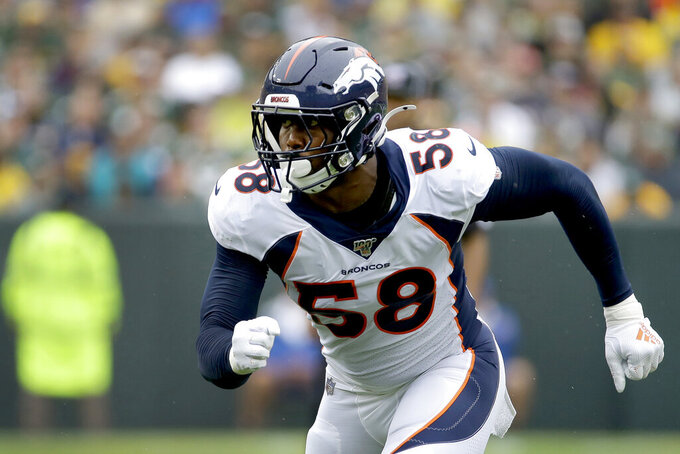 FILE - Denver Broncos outside linebacker Von Miller takes up his position during the first half of an NFL football game against the Green Bay Packers in Green Bay, Wisc., in this Sunday, Sept. 22, 2019, file photo. The Denver Broncos have exercised star linebacker Von Miller's 2021 option. The move engages the final season of the six-year, $114.5 million contract Miller signed in 2016 in the aftermath of his Super Bowl 50 MVP performance. It also guarantees him $7 million of his $17.5 million base salary. (AP Photo/Mike Roemer, File)

For people wondering where is all the free-agent quarterback movement as the NFL's “legal tampering” period enters its second day, well, calm down.

The biggest spenders at the position had been two teams keeping their supposed guy, Cam Newton in New England and Jameis Winston in New Orleans. Of course, trades that can be completed when the NFL's business year begins Wednesday will see Carson Wentz with the Colts, Matthew Stafford heading to the Rams in exchange for Jared Goff, who goes to the Lions.

On Tuesday, Indianapolis' Jacoby Brissett landed with the Dolphins, and Andy Dalton left Dallas for Chicago.

Incredibly, Fitzpatrick never has been on a playoff team in his 16 pro seasons. He will be replaced as Tua Tagovailoa's backup by Brissett, who will get a one-year, $5 million deal in Miami.

With 2020 NFL Comeback Player of the Year Alex Smith released by Washington — no, Smith has not landed anywhere yet, either — Fitzpatrick will compete with Taylor Heinicke and Kyle Allen for the starting spot on a team that won the weak NFC East at 7-9.

A guy who not only has been to the postseason but has a Super Bowl ring, Von Miller, is remaining with the Broncos. The Denver Broncos have exercised star linebacker Von Miller’s 2021 option, which engages the final season of the six-year, $114.5 million contract and guarantees him $7 million of his $17.5 million base salary.

Miller has recovered from a freak ankle injury that sidelined him all of last season.

Dalton has a shot to start in quarterback-weak Chicago, where Trubisky was not kept and Nick Foles has to prove himself once again. The Bears are paying him about $10 million for one year, which is hefty for a backup.

Dalton, 33, was 4-5 as a starter for the Cowboys after Dak Prescott was injured. A longtime starter in Cincinnati, he threw for 2,170 yards, 14 touchdowns and eight interceptions.

Cincinnati grabbed one of the top pass-rush threats available in free agency, Trey Hendrickson. The former Saints defensive end gets $60 million over four years, with $32 million paid in the first two seasons, according to a person with knowledge of the contract. The person spoke on condition of anonymity because no terms have been made public.

How important is the Bengals' new edge rusher? Hendrickson had 13 1-2 sacks in 2020; Cincinnati as a team had 17, fewest in the league.

The Bengals also reached agreement with Pittsburgh safety Mike Hilton on a four-year, $24 million contract, also according to a person with knowledge of the deal. Hilton, 31, figures to play mostly as a slot defender. They kept safety Brandon Wilson with a two-year contract extension. He is Cincinnati's main kick returner.

— New England continued handing out money, agreeing with 49ers receiver Kendrick Bourne on a three-year, $22.5 million pact. The 25-year-old Bourne came on the last two seasons in San Francisco, though he's not likely a No. 1 wideout.

The Patriots also are negotiating with Chargers tight end Hunter Henry after adding Jonnu Smith of the Titans at that position on Monday.

The Steelers also re-signed cornerback Cam Sutton to a two-year deal worth $9 million and brought back offensive tackle Zach Banner, who won the right tackle job out of training camp last summer only to suffer a season-ending knee injury in the opener against the New York Giants.

— Chicago re-upped DE Mario Edwards for three years and $11.5 million. With his fourth pro team, Edwards had a career-best 4 1-2 sacks for the Bears in 2020. The Bears announced the deal three days after reaching it with the 27-year-old Edwards.

— Jacksonville added an immediate starter in Seattle cornerback Shaquill Griffin for a three-year deal worth up to $44.5 million, $29 million guaranteed. Griffin’s agent, Buddy Baker, tweeted “Duval,” a nod to the city’s rallying cry.

Griffin has 48 pass breakups, including six interceptions, in four years with the Seahawks. He had a career-best three picks last season.

— As the Raiders revamp their blocking unit, they are releasing center Rodney Hudson. The 10-year veteran has two years remaining on his contract.

Hudson has been among the NFL's best blockers at center, and was an All-Pro in 2019. He leaves Las Vegas along with right tackle Trent Brown (dealt to New England), and left guard Richie Incognito (released). The only starter from 2020 assured of returning is 2018 first-round pick, left tackle Kolton Miller.

— Cleveland is bringing in Takk McKinley, who has struggled to stay healthy since being a first-round draft selection by Atlanta in 2017. The Falcons didn’t pick up the fifth-year option on his rookie contract, and cut him after four games last season while he dealt with a groin injury. McKinley, 25, was claimed by Cincinnati and San Francisco but failed physicals. He went to Las Vegas but wound up on injured reserve.

— The Titans are releasing cornerback Adoree Jackson and right tackle Dennis Kelly to clear salary cap space. Kelly signed a three-year, $21 million deal exactly a year ago and started all 16 games at right tackle. Also in 2020, the Titans picked up the fifth-year option on rookie contract for Jackson, the 18th overall pick in 2017. He was due $10.24 million under that option. Jackson started 41 of 46 games for the Titans but a knee injury just before the start of the season limited him to three games in 2020.

— The Vikings released defensive tackle Shamar Stephen and cleared $3.75 million under the salary cap. Stephen signed a three-year contract as a free agent in 2019 with a $4 million signing bonus, but will be replaced by former New York Giants starter Dalvin Tomlinson.