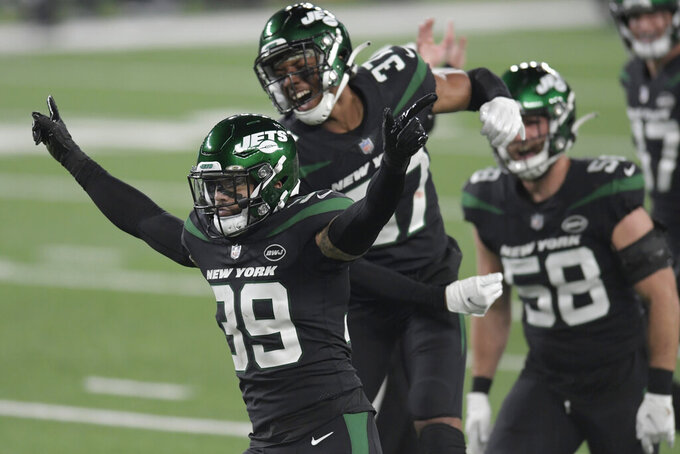 NEW YORK (AP) — First, the good news for some frustrated New York Jets fans: They might not have to endure the embarrassment of a winless season.

Now, the not-so-good news: No 0-16 finish could mean they miss out on being No. 1 in the NFL draft next April.

With Adam Gase's group skidding at 0-9 — a franchise-worst start — and coming off their bye-week break, all eyes will be on whether the Jets become the third team in NFL history to lose all 16 games. For those banking on that — and maybe even hoping because of the guaranteed draft position — well, press the pause button.

Wolverine Studios, a PC sports video game developer that produced a simulation of the NCAA Tournament in March, is the creator of a series of games that allow users to manage and develop their own programs and teams from the college to the professional level in several sports. They went to work last weekend and ran 200 analytics- and data-driven simulations of the Jets’ final seven games for The Associated Press.

The result: New York has about a 60% chance of winning one of them. And the matchup with the best chances of producing that lone victory? The season finale at AFC East-rival New England.

“First, we took our simulation engine, ‘Draft Day Sports: Pro Football 2021,’ and used a community-created mod as a starting point,” Gary Gorski, owner and founder of Wolverine Studios, explained in an email. “From there, we modified it so that we had players on the proper teams, adjusted some players based on their performance this season and tried to make everything just right as to simulate the final seven weeks of the season to see how the Jets would fare."

Wolverine Studios, whose football game isn’t licensed by or affiliated with the NFL, prevented injuries from occurring in the simulations because it didn’t want outcomes to be determined by that highly unpredictable variable.

For those focused on New York pushing the reset button next season and getting the No. 1 overall pick — likely Clemson quarterback Trevor Lawrence — all might not be lost even with a win. In 99% of the simulations, the Jets finished either with the NFL's worst record or tied for it. Jacksonville is currently New York's closest competition at 1-8.

The “quest” resumes for the Jets at Los Angeles on Sunday when they take on the struggling Chargers (2-7) with Joe Flacco starting for the injured Sam Darnold. The simulations gave New York a 6% chance of winning, although that came before the news Monday that Darnold's shoulder would keep him sidelined. However, Gorski said the ratings for both quarterbacks were close and wouldn't change the simulation results.

“One thing that we could not simulate is the ‘Belichick factor’ in Week 17,” Gorski said. “If the Jets are 0-15 heading into that final game, what exactly will Bill Belichick do to make sure the Jets finish 0-16? That potential level of genius is something we couldn’t account for, so that New England game may not look as good as it does in theory.”

Well, Gorski said the home games against the Raiders and Browns could end that conversation before the Jets head to Foxborough. Despite both Las Vegas and Cleveland currently 6-3 and in the AFC playoff hunt, Gorski pointed out those teams could face an even tougher opponent than the guys in green and white.

“The possibility for cold, windy and sloppy weather is something that our simulation does take into effect,” Gorski said. "We noticed in the few games won by the Jets in our simulations, virtually every one was by seven points or less. A sloppy, wintery mix might be just what they need to avoid the 0-16 mark.

"So, while it may look bleak to many on paper that the Jets can score a win this season, we think they’ve got a decent shot of getting one.”

And that would mean “Game Over” on a dubious spot in NFL history.