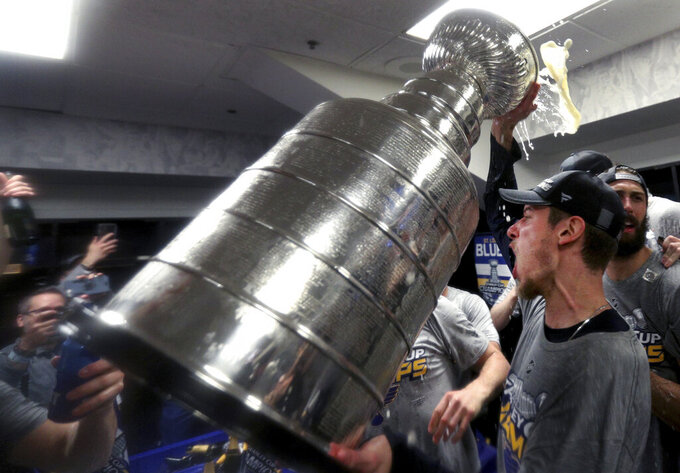 St. Louis Blues goaltender Jordan Binnington celebrates with the Stanley Cup in the locker room after defeating the Boston Bruins in Game 7 of the NHL Stanley Cup Final, Wednesday, June 12, 2019, in Boston. (Dave Sandford/Pool via AP)

TOKYO (AP) — I can't imagine there were many St. Louis Blues fans farther from their hometown than I was when the team finally won its first Stanley Cup. If not, my kicker is that I actually attended Blues games that first season in 1967-68.

Others talk about being long-suffering fans. They've got nothing on me.

I'm based in Tokyo covering the run-up to next year's Olympics for The Associated Press — hard-bitten, cynical, and a hack who has covered a dozen Olympics and soccer World Cups. I'd almost forgotten how attached mere fans get to their local teams — until the Blues got close to the prize, making me extremely superstitious.

I refused to watch the final game, which I could have even from Japan. I shut off my cellphone when the Blues started playing at 9 a.m. in Tokyo, afraid I might jinx them if I peeked at the score. I only got the news when Kelly, a former St. Louis neighbor, sent me a text: "The Cup is ours!"

And imagine, I haven't lived in my hometown for almost 30 years as I've followed stories around the world for the AP.

I can do more than simply reference those early Blues teams. I was one of the fans down in front of the old Arena on Oakland Avenue that first season when hockey suddenly became the most popular game in town — at least in the winter when the Cardinals weren't playing.

And remember, the Blues took the ice for the first time in 1967, just after the Cardinals had beaten the Red Sox in the World Series.

There's of course the 2002 Super Bowl, in which the New England Patriots beat the St. Louis Rams, a team that never had the deep roots of the Blues or Cardinals.

If you go way back, it was the 1958 St. Louis Hawks with 50 points by Bob Pettit in the seventh game who upset the Boston Celtics with Bob Cousy and an injured Bill Russell in the NBA finals. The Hawks and Celtics met three other times in the 50s and early 60s with the Celtics taking all three.

In a sad twist, it was partly the instant popularity of the Blues that drove the Hawks — with Zelmo Beaty and Lou Hudson — to Atlanta after the 1967-68 season.

That first Blues season, my life-long buddy Don and I would buy a $2.75 ticket — the cheapest, of course — to get in and watch Glenn Hall, Al Arbour, Noel Picard, Red Berenson — and of course, the Plager Brothers and coach Scotty Bowman take the ice, always to an organ serenade: "When the Blues Go Marching In."

Then there was the radio call of the-late Dan Kelly on KMOX, a Canadian who taught the city about dekes and power plays, and explained the two-line offside rule — now thankfully gone from the game.

My proudest moment as a kid might have come in the Summer of '68 when I had my photograph taken with defenseman Jimmy Roberts at a hole-in-one golf tournament in the city's famed Forest Park. It ran the next day in the morning newspaper, the now-defunct St. Louis Globe-Democrat.

I swore I'd never lose the clip. But I did, as I have many others in a long career of sports writing that never included one about the Blues winning the Stanley Cup.