State court suit over 'no-call' can proceed against NFL 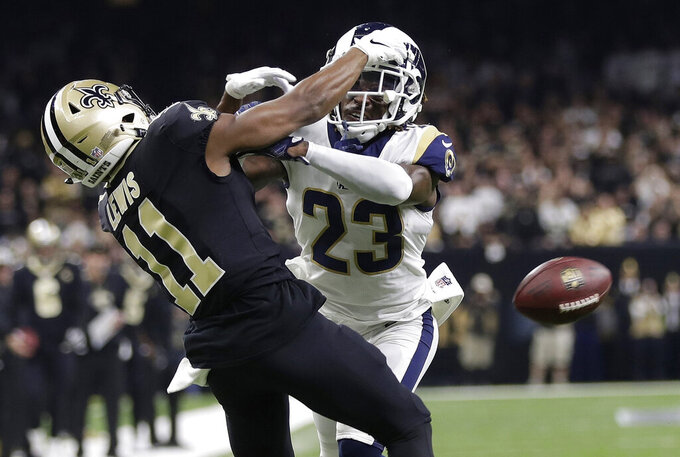 FILE - In this Jan. 20, 2019, file photo, Los Angeles Rams' Nickell Robey-Coleman breaks up a pass intended for New Orleans Saints' Tommylee Lewis during the second half of the NFL football NFC championship game in New Orleans. A Louisiana judge won't stop a lawsuit against the NFL over the playoff "no-call" that led to the Rams defeating the Saints and advancing to the 2019 Super Bowl. State Civil District Court Judge Nicole Sheppard ruled Thursday, July 18, 2019 in the damage suit filed by attorney Antonio LeMon. (AP Photo/Gerald Herbert, File)

NEW ORLEANS (AP) — A Louisiana judge ruled Thursday that a damage lawsuit can continue against the NFL over the playoff "no-call" that helped the Los Angeles Rams beat the New Orleans Saints and advance to the Super Bowl.

State Civil District Court Judge Nicole Sheppard also ruled that attorney Antonio "Tony" LeMon can request documents and ask questions of NFL officials. LeMon said that means he will be able to question Commissioner Roger Goodell and three game officials in depositions about the lack of a penalty — pass interference or roughness — against Rams cornerback Nickell Robey-Coleman for his helmet-to-helmet hit on receiver Tommylee Lewis well before a pass arrived. The play came during a crucial point in January's NFC title game.

Attorneys representing the NFL in the case didn't immediately respond to emailed requests for comment. LeMon said he was informed Thursday that NFL attorneys, whose bid to stop the suit was rejected, would seek relief at a state appeal court.

LeMon says money isn't the object of the February suit he and three others filed, which alleges fraud by NFL officials. It seeks only $75,000, which LeMon said would go to charity.

"The purpose of the lawsuit is not to get some minuscule amount of money. They won't even notice that," LeMon said. "It's to get at the truth."

Other suits dealing with the blown call have wound up in federal court, where they have failed. They included one long-shot effort to have the game or a crucial part of it played over before the Rams met the New England Patriots in the Super Bowl, which the Patriots won.

LeMon said that by seeking $75,000 in damages, he keeps the suit below a threshold that could result in it begin transferred to federal court, as other suits have been.

"I feel that their record in the federal courts is way too good," he said. He also wants the case tried under Louisiana law and jurisprudence, he said.

LeMon said he wants what he describes as a "mountain" of evidence in the case. He said he wants to know, among other things, whether the officials involved in the play were disciplined for not throwing a flag. "I want their personnel files. I want their gradings," he said. "I want their notes from the game."

In April, NFL owners voted to next season allow pass interference calls to be challenged by coaches and reviewed on replay by officials.