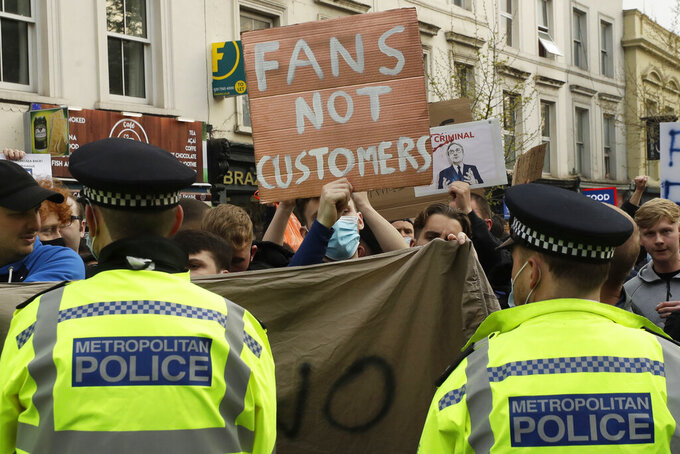 Chelsea fans protest outside Stamford Bridge stadium in London, against Chelsea's decision to be included amongst the clubs attempting to form a new European Super League, Tuesday, April 20, 2021. Reaction to the proposals from 12 clubs to rip up European soccer by forming a breakaway Super League has ranged from anger and condemnation to humor and sarcasm. (AP Photo/Matt Dunham)

LONDON (AP) — The Super League collapsed before a ball was kicked in the European breakaway competition after being abandoned by the six English clubs, leaving the Spanish and Italian participants stranded.

Arsenal, Chelsea, Liverpool, Manchester United, Manchester City and Tottenham throughout Tuesday evening deserted the proposal to launch a largely-closed midweek competition amid an escalating backlash from their supporters and warnings from the British government that legislation could be introduced to thwart it.

The Super League project was overseen by Real Madrid President Florentino Perez, who also signed up Barcelona and Atlético Madrid in Spain, and Juventus, AC Milan and Inter Milan from Italy. The rival for the UEFA-run Champions League became unviable without the six clubs from the world's richest league.

The remaining fledgling Super League organization was defiant, blaming “pressure” being applied for forcing out the English clubs and insisting the proposal complied with the law and could yet be revived in some form.

“Given the current circumstances,” the Super League said in a statement, “we shall reconsider the most appropriate steps to reshape the project, always having in mind our goals of offering fans the best experience possible while enhancing solidarity payments for the entire football community.”

The English clubs heeded the appeals from UEFA President Aleksander Ceferin to remain part of the Champions League, which has a qualification criteria based on a team's performance in the domestic league.

“I said yesterday that it is admirable to admit a mistake and these clubs made a big mistake," he said. “But they are back in the fold now and I know they have a lot to offer not just to our competitions but to the whole of the European game.

“The important thing now is that we move on, rebuild the unity that the game enjoyed before this and move forward together.”

As it became clear Chelsea and City were quitting the Super League on Tuesday evening, Liverpool captain Jordan Henderson and his teammates posted a message advocating staying within the open European competitions.

Liverpool, which is owned by the Boston Red Sox investment group, eventually issued a statement thanking those inside and outside the club for “valuable contributions” before making the decision to stick within existing structures.

Manchester United defender Luke Shaw also went against his club by tweeting his backing of the existing Champions League minutes before his club's about-turn.

“We have listened carefully to the reaction from our fans, the UK government and other key stakeholders,” said the club owned by the American Glazer family and listed on the New York Stock Exchange. "We remain committed to working with others across the football community to come up with sustainable solutions to the long-term challenges facing the game.”

Just as the Glazers also own the Tampa Bay Buccaneers, Stan Kroenke has the NFL's Los Angeles Rams in his portfolio along with Arsenal. It is the closed models of American sports that were believed to be so appealing to the U.S. owners by offering financial certainty.

But they were resisted by fans of English clubs.

“It was never our intention to cause such distress, however, when the invitation to join the Super League came, while knowing there were no guarantees, we did not want to be left behind to ensure we protected Arsenal and its future," the north London club said. "As a result of listening to you and the wider football community over recent days we are withdrawing from the proposed Super League. We made a mistake, and we apologize for it.

“We know it will take time to restore your faith in what we are trying to achieve here at Arsenal but let us be clear that the decision to be part of the Super League was driven by our desire to protect Arsenal, the club you love, and to support the game you love through greater solidarity and financial stability.”

Tottenham also gave a detailed explanation for why it signed up before backing away.

“We regret the anxiety and upset caused by the ESL proposal,” chairman Daniel Levy said. “We felt it was important that our club participated in the development of a possible new structure that sought to better ensure financial fair play and financial sustainability whilst delivering significantly increased support for the wider football pyramid.

“We believe that we should never stand still and that the sport should constantly review competitions and governance to ensure the game we all love continues to evolve and excite fans around the world.”

Chelsea, which is owned by Russian billionaire Roman Abramovich, said it only joined the Super League group last week.

“We have now had time to consider the matter fully and have decided that our continued participation in these plans would not be in the best interests of the club, our supporters or the wider football community,” Chelsea said in a statement hours after its game against Brighton had been delayed by fan protests outside its Stamford Bridge stadium.

The Premier League threatened to sanction the six rebel clubs and Prime Minister Boris Johnson considered introducing laws to stop them forming a new European competition he called a “cartel."

Divisions within the Super League clubs also grew with Manchester City manager Pep Guardiola saying the Super League would damage the integrity and values of sport. Liverpool manager Jürgen Klopp has also expressed concerns about the actions of his club's owners.

The Premier League had threatened the six clubs with expulsion if they tried to go it alone in Europe. The other 14 clubs met Tuesday and "unanimously and vigorously" rejected the Super League plans.

The government is exploring adopting the 50-plus-1 rule from Germany that gives fans the majority of voting rights, nominally to protect clubs from being controlled by private investors.

“Our fan-led review will still happen and I remain convinced of the need for reform," Dowden said. "We must make sure this never happens again.”

Everton decried the “preposterous arrogance" of Super League clubs. Everton’s nine titles are the fourth most by a team in the history of the English top division, and the club from Merseyside was considered part of the country’s elite in the 1980s and early 1990s.

“The backlash is understandable and deserved — and has to be listened to,” Everton's board of directors said in a statement. “This preposterous arrogance is not wanted anywhere in football outside of the clubs that have drafted this plan.”

The Italian clubs declined to comment earlier, and the Spanish teams were not commenting late Tuesday.