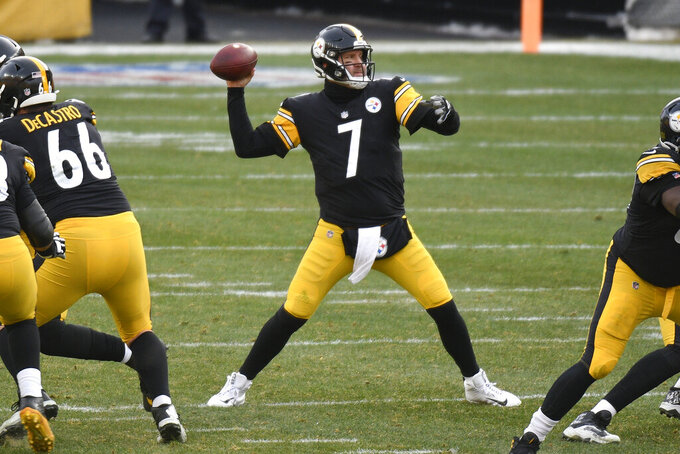 PITTSBURGH (AP) — The opportunities are dwindling.

Ben Roethlisberger knows it. Cam Heyward and David DeCastro too.

It's been a decade since the Pittsburgh Steelers have reached the Super Bowl and a dozen years since they've won it. In most places, that's hardly a drought. Not in a place where players, coaches and front office members walk past six Lombardi Trophies each day when they get to work.

The chances Roethlisberger thought would pop up repeatedly following that stinging defeat to Green Bay in 2011 during his third Super Bowl appearance in six seasons have not materialized.

Now 38, playing with a surgically repaired right elbow and four years removed from his team's most recent playoff victory, Roethlisberger is well aware of how small the window has become for the AFC North champions (12-4) heading into Sunday's first-round visit from Cleveland (11-5).

“When I was a young guy people tried to explain to me that take advantage of this, that and the other,” Roethlisberger said Wednesday. “You’re thinking ‘I am young; I’ll get back.’ It’s not guaranteed. I think all of the veteran guys as we are winding down our careers, we understand we don’t know what is next. If there is going to be a next for some guys.”

He's not being dramatic. While Roethlisberger is under contract for 2021, he says he won't make a firm decision until sometime in the offseason. Left tackle Alejandro Villaneuva is in the final days of a deal that will expire in March.

During their car rides into practice each day, Villanueva and DeCastro trade barbs, debate ideas and try to appreciate what little time remains in this chapter of their lives.

“Kind of surreal thinking this might be the last year today because of the business side of it,” DeCastro said.

And there is a financial reckoning coming for the Steelers. Pittsburgh is already $21 million over the 2021 salary cap, and that's with just 35 players under contract for next season.

Wide receiver JuJu Smith-Schuster and running back James Conner will hit the open market in the spring. Outside linebacker T.J. Watt will enter the final year of his rookie deal, and there's a strong desire to lock up the Defensive Player of the Year candidate long-term, which won't be cheap.

Cornerback Joe Haden, who will sit out on Sunday because of COVID-19 protocols, has a cap hit of more than $15 million. Roethlisberger's is $41.25 million. Though restructuring could ease some of the pain, it can't stem all of it.

The looming changes to a franchise that prides itself on its consistency have brought an added urgency to a season that's seen the Steelers look like both a Super Bowl contender and an also-ran, sometimes in the same game.

“You don’t want to be saying ‘What if?’ and there’s countless opportunities I’ve missed,” Heyward said. "And I don’t want this to be an opportunity I missed.”

Heyward made an attempt to drive it across during a meeting when he outlined the bonus money for winning each round of the playoffs, a figure that runs into the low six figures. Oh, and the chance to become the first franchise to win seven Super Bowls.

“I know it can feel overwhelming but let your work take care of it,” Heyward said.

Heyward missed Pittsburgh's run to the 2016 AFC championship game because of a pectoral injury. He was on the field, however, for a divisional-round loss to Jacksonville in 2017 when the Jaguars came to Heinz Field as seven-point underdogs and stunned the AFC's second seed by racing to a three-touchdown lead and then holding on.

A return trip to the playoffs in 2018 was undone by a 2-4 finish. Despite losing Roethlisberger at halftime of Week 2 last season, Pittsburgh was 8-5 and in the thick of things in mid-December until dropping its final three games.

The years are passing by quickly. Heyward arrived months after the Super Bowl loss to the Packers. DeCastro joined him a year later. They've combined for 10 Pro Bowl appearances, $140 million in career earnings and five playoff berths. They've done just about everything there is to do, except the one thing by which all Steelers are measured. And they know it.

“The only thing I really have left is the Super Bowl and that experience of what it would be like for the team, the city, the fans,” DeCastro said. "That would be amazing to get that done. I would love to see it, would love to be a part of it.”

NOTES: Roethlisberger, who sat out last week's regular-season finale against the Browns to rest, was a full participant in practice on Wednesday, a rarity. ... DT Tyson Alualu (ankle) and LB Vince Williams (quadriceps) did not practice. K Chris Boswell (groin) and CB Steven Nelson (knee) were limited. ... LG Matt Feiler (pectoral) and LB Robert Spillane (knee) practiced for the first time since going to injured reserve in December. The team has 21 days to activate them. ... The Steelers and the Kraft Heinz Company reached an agreement to extend the naming rights for Heinz Field through 2021. The current deal was set to expire at the end of this season.