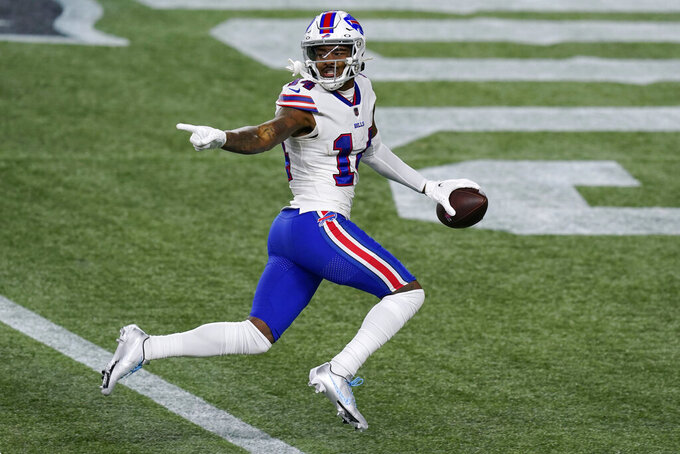 FILE - In this Dec. 28, 2020, file photo, Buffalo Bills wide receiver Stefon Diggs crosses the goal line for a touchdown after catching a pass during the first half of the team's NFL football game against the New England Patriots in Foxborough, Mass. Tennessee can only hope adding seven-time Pro Bowl wide receiver Julio Jones helps at least as much as adding Stefon Diggs a year ago helped the Buffalo Bills or the success of other NFL teams after such big moves over the years. (AP Photo/Elise Amendola, File)

Then the Titans did just that, becoming the latest NFL team to trade for a wide receiver hoping he provides the needed offensive boost to turn a good team into a champion. Brown is excited to have a Hall of Fame-caliber receiver on the other side.

“He's going to demand a lot of attention,” Brown said.

Tennessee has made the playoffs three of the past four seasons and lost in the AFC championship game to Kansas City in January 2020. The Titans had one of the NFL’s best offenses last season, but couldn’t help Henry enough in the playoffs as they lost in the wild-card round.

That's why the Titans traded a pair of draft picks to Atlanta trying to upgrade the receiver spot. Jones joins the AP NFL Offensive Player of the Year in Henry, a strong-armed quarterback in Ryan Tannehill and Brown who was voted to the Pro Bowl in 2020 in just his second season.

Jones also is very motivated after a nagging hamstring injury snapped a streak of six straight seasons with more than 1,300 yards receiving in 2020.

“It’s a great opportunity for me to just showcase my skills, my ability, what I do, what I bring to the game,” Jones said.

Now Tennessee can only hope adding the seven-time Pro Bowl wide receiver helps at least as much as adding Stefon Diggs a year ago helped the Buffalo Bills or the success of other NFL teams after such big moves over the years.

Buffalo wanted to give a big boost to quarterback Josh Allen even though GM Brandon Beane said before the trade he didn’t think the Bills were just one player away. That didn't stop him from sending four draft picks to Minnesota for Diggs, a big-play receiver coming off his best season yet.

Statistically, it paid off. Diggs led the NFL with 127 catches for 1,535 yards, and the Bills reached the AFC championship game for the first time since 1994.

That's where the run stopped with a loss in Kansas City — a game shy of the Super Bowl.

Bill Belichick and the Patriots spent only a fourth-round draft pick to add Randy Moss from the Oakland Raiders in April 2007. Moss' third NFL team, or maybe it was Tom Brady, proved a perfect fit as the receiver set a career high with 23 TD catches.

The move certainly helped as the Patriots reached the Super Bowl seeking perfection only to be denied by Eli Manning and the New York Giants. Moss played two more seasons without the Patriots getting back to a Super Bowl, and they traded him to Minnesota in 2010.

Wide receiver Freddie Solomon was just part of what San Francisco got from Miami in a deal sending running back Delvin Williams to the Dolphins. The 49ers got the better end as Solomon wound up a key part of Bill Walsh’s West Coast offense, helping win not one, but two Super Bowls in 1982 and 1985.

Minnesota already had lost three Super Bowls, the last in January 1975, when the Vikings made a deal with Buffalo for Ahmad Rashad. The cost? A fourth-round draft pick. The result? A fourth trip to the Super Bowl in Rashad’s first season with the Vikings.

But Rashad made only three catches for 53 yards in that game as Minnesota was routed by Oakland for another championship loss. The Vikings got back to the NFC championship game the next season only to lose to Dallas.

Paul Warfield already had an NFL championship with the Cleveland Browns when they traded him to Miami for the No. 3 overall pick in the 1970 draft. That deal helped turn the Dolphins from losers to champions, though it took two years for Miami to reach its first Super Bowl.

The Dolphins lost that Super Bowl, the first of three straight championship berths. Warfield, a Hall of Fame wide receiver and member of the All-1970s team, helped Miami win the other two titles.

Arizona hasn't made the playoffs — yet — after its stunning trade for a three-time All Pro wide receiver. The Cardinals certainly set young Kyler Murray up for much more success after the blockbuster trade in March 2020.

DeAndre Hopkins was the highlight of a deal costing Arizona only two draft picks, nothing higher than a second-rounder. Hopkins and Murray gave a tantalizing look at what they can do connecting on a “Hail Murray” touchdown pass to beat Buffalo last November when the receiver outjumped three defenders for the ball.