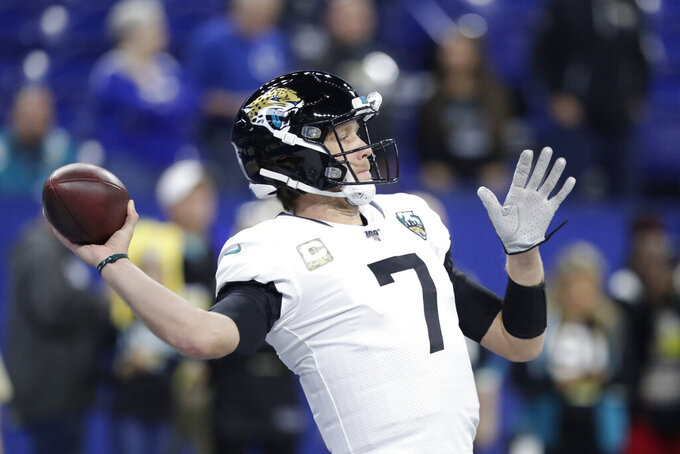 NASHVILLE, Tenn. (AP) — Tennessee defensive tackle Jurrell Casey has been in this spot with the Titans more times than he wants to count.

The NFL season’s getting late, and the Titans find themselves in the playoff hunt despite a 2-4 start. Four of the final six games are inside the AFC South starting Sunday against Jacksonville, giving the Titans (5-5) another chance to add to their lone playoff berth in the past decade.

“We always find ourselves in a position where we can take control of our own destiny,” Casey said. “Now we just got to make sure we do it. I think past years we let time slip after time and we have to make sure we take advantage of this season.”

Casey is among four Titans who used last week’s bye to heal injuries that kept them out of a 35-32 win over Kansas City on Nov. 10. They also have won four of the past five against Jacksonville.

But the Jaguars (4-6) beat Tennessee 20-7 on Sept. 19 and are poised for their first sweep of the Titans since 2005. It would be just the third all-time in a divisional rivalry that stretches back to Jacksonville’s inaugural season in 1995.

The Jaguars have lost two straight and four of six coming off a 33-13 loss in Indianapolis that featured Nick Foles’ first game since breaking his left collarbone in the season opener. They need a win if only to dispel any memories of last season when they went 5-11, which included a seven-game skid.

"Pressing can lead to worse things,” Jaguars defensive tackle Abry Jones said. “We just got to make sure no one's going out there panicking and feeling like they have to do things they don't have to do."

The Jaguars piled up nine sacks of Marcus Mariota in Week 3, but the Titans benched him for Ryan Tannehill after an Oct. 13 loss in Denver. Tannehill is 3-1 as a starter and has helped the Titans score at least 20 points in each of his starts. Better yet, the Titans have scored touchdowns on their last 10 trips inside an opponent’s 20 and lead the NFL by scoring TDs in that area 72% of their trips.

Foles got ripped twice this week for how he responded to questions about Jacksonville's situation.

He raised eyebrows after a lopsided loss at Indianapolis by saying "we're blessed to play a game" and urging teammates to go home and spend time with their families. He caught more grief Wednesday for saying "we're figuring out who we are as a culture."

"We're going through our journey right now," Foles said, drawing fans' ire on social media because it's Week 12. "Everyone wants you just to arrive at the end goal, but that's not how this thing works. We're in that tough time. This is really where you get tested and this is where you can either go this way or that way. Which one do you want to choose?"

The Jaguars rank fifth in the NFL with 33 sacks, led by defensive end Josh Allen with eight. He had two sacks the last time these teams met, and Allen is trying to chase down the NFL rookie record of 14 ½ set by Jevon Kearse with Tennessee in 1999.

The Titans, tied for 12th with 27, are led by second-year linebacker Harold Landry III with seven. Landry has 11 ½ career sacks over his first 25 games. Since 1999, only Kearse (17 ½) has had more in that span for Tennessee.

Leonard Fournette is growing increasingly frustrated by the week. That's because Jacksonville's workhorse running back is barely touching the ball.

The third-year pro was leading the AFC in rushing just a few weeks ago — and even campaigning for Pro Bowl votes — but he's dropped significantly after running for 40 and 23 yards, respectively, in back-to-back loses to Houston and Indianapolis.

He carried just eight times against the Colts, and his angst was evident late in the game and in the locker room.

"I know Leonard's frustrated," coach Doug Marrone said. "He wants to make plays and help us win the game."

The Jaguars gave up 264 yards rushing last week to the Colts, dropping them to 29th in the league against the run, allowing 134.6 yards a game. Now they must slow down Derrick Henry who had a record-setting game with a career-best 238 yards the last time Jacksonville played in Nashville. Henry is coming off his best game this season, running for 188 yards against the Chiefs.