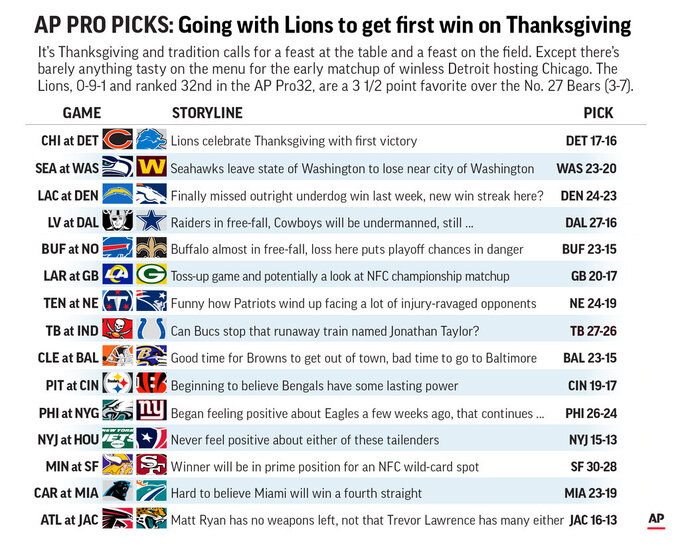 It's difficult enough choosing winners and point-spread coverers and upsets when there is one Thursday night game each NFL week.

As for three, well, c'mon. Short breaks between games is ridiculously tough when there is only that one contest. And don't get us started on how we feel about Thursday nighters overall.

However, it's Thanksgiving, and tradition calls for a feast at the table and a feast on the field. Except that there's barely anything tasty on the menu for the early matchup of winless Detroit hosting Chicago.

No matter, says Lions coach Dan Campbell, who has played in the holiday game for both Detroit and Dallas.

“I do believe our guys still look at it as it’s a special thing,” he says. "Everybody is watching this game and everybody’s got their families at home and they’re all circled around the TV, they just ate or they’re going to eat afterwards. I think it still rings true that it is special.

"And yeah to your point, to be able to get a win on that day — look to get a win, period — is going to be freaking outstanding. But yes, to get it on Thanksgiving would make it that much more special.”

KNOCKOUT POOL: Pro Picks took another Canelo-like shot to the jaw with the Titans. If you care, we'd favor BALTIMORE this week.

We finally missed on an outright win by an underdog. Maybe the Broncos will start a new winning string for Pro Picks.

The Raiders are in free-fall, and the Cowboys will be undermanned. Still ...

Buffalo is almost in free-fall, and a loss here would put its playoff chances in danger.

A toss-up game and potentially a look at the NFC championship matchup.

Funny how the Patriots wind up facing a lot of injury-ravaged opponents.

Both teams come off big weekends. Can the Bucs stop that runaway train named Jonathan Taylor?

A good time for the Browns to get out of Cleveland. A bad time to go to Baltimore.

We're beginning to believe the Bengals have some lasting power.

We began feeling positive about the Eagles a few weeks ago. That will continue.

We never feel positive about either of these tailenders.

The winner will be in prime position for an NFC wild-card spot.

Hard to believe Miami will win a fourth straight.

Poor Matt Ryan has no weapons left. Not that Trevor Lawrence has many, either.