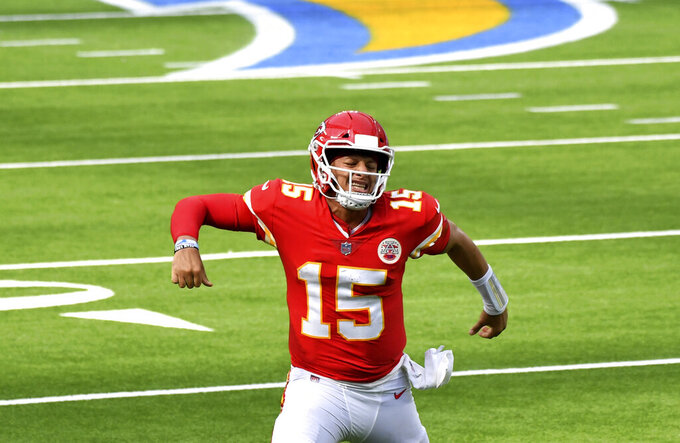 quarterback Patrick Mahomes #15 of the Kansas City Chiefs reacts after throwing a touchdown pass to wide receiver Tyreek Hill (not pictured) against the Los Angeles Chargers in the second half of a NFL football game at SoFi Stadium in Inglewood on Sunday, September 20, 2020. Kansas City Chiefs won 23-20 in overtime. (Keith Birmingham/The Orange County Register via AP)

ORCHARD PARK, N.Y. (AP) — Josh Allen doesn’t know if he can throw a football farther than Patrick Mahomes, but he’s eager to find out.

“The farthest I’ve ever thrown was 83 yards in Wyoming, 7,200-feet elevation, so I got a little help there,” the Buffalo Bills quarterback said. “But I know he’s got a cannon as well.”

Looking ahead to Buffalo hosting the Kansas City Chiefs on Monday, Allen said he and Mahomes just might discuss the possibility of holding a throw-off for charity somewhere down the line.

The Bills and Chiefs are both 4-1 and coming off uncharacteristic losses in a showdown of two of the NFL’s leading passers: Allen is second with 1,589 yards, and Mahomes fourth with 1,474.

“It’s hard not to root for him. I love watching him have success, except this coming Monday,” Allen said. “Hopefully we can get at him a couple of times. But he’s one of those players where you don’t want to give him more opportunities than they’re going to get.”

The Bills are coming off a dud in which all three phases melted down in a 42-16 loss at Tennessee on Tuesday. After throwing four interceptions in his previous 16 starts, Allen was picked off twice, and Buffalo’s pass-happy offense was smothered by a Titans defense intent on taking away the deep ball.

The defending Super Bowl champion Chiefs, meantime, dropped a 40-32 clunker to the Las Vegas Raiders, snapping a franchise-best 13-game winning streak. Mahomes might have topped 300 yards passing for the 20th time in his career, but his interception — his first of the season — with 5:31 left ended the Chiefs' comeback bid.

“We had some shots here and there that we hit. We were able to go down there and score some points, but we weren’t able to execute at the level we wanted,” Mahomes said.

Though much of the buzz is focused on two potent offenses, the difference might come down to which defense performs better.

The Chiefs’ troubles are stopping the run in having allowed 150 or more yards rushing three times already.

The Bills are struggling against opposing quarterbacks, in having given up 10 touchdowns passing, five more than last year.

The game was initially scheduled for Thursday night, but moved to Monday at 5 p.m. EDT after the Bills' game against Tennessee was moved to Tuesday because of the Titans testing positive for COVID-19.

It’s the second time in three weeks the Chiefs had a game re-scheduled after their outing against New England on Sunday, Oct. 4, was pushed to Monday night. Rather than playing three games in 11 days, the Chiefs are playing three times in 15 days, with two extra days of rest on Buffalo.

Chiefs receiver Sammy Watkins’ return to Buffalo will have to wait after the Bills' 2014 first-round pick hurt his hamstring on Sunday. Traded by the Bills to the Rams in August 2017, Watkins has yet to face his former team.

The Chiefs will also be without offensive lineman Kelechi Osemele, who tore tendons in both of his knees Sunday. Mike Remmers is set to replace Osemele.

“Yeah, if you could only be in my brain right now ... you don’t want to be there,” McDermott said.

For a defense that returned nine starters from a unit that allowed the third-fewest yards in the NFL last year, the Bills have been porous. Buffalo has allowed 142 points already, the most through the first five games since giving up 176 in 2012.

Buffalo has allowed opponents to convert 60% of third-down chances twice this season, after not allowing one in the first three years under McDermott.

McDermott, who spent 10 seasons as an assistant under Andy Reid in Philadelphia, is 1-0 in head-to-head meetings after Buffalo’s 16-10 win at Kansas City in 2017.

McDermott praised Reid for continuing to be a mentor, and was elated when the Chiefs won the Super Bowl. He doesn’t expect the two to share any pleasantries this week.

“Yeah, I’m sure he wants to kick my butt, and we’re gonna want to do the same,” McDermott said.

A week after making a successful Bills debut in helping key a 30-23 win at Las Vegas, cornerback Josh Norman had a game to forget against Tennessee. The ninth-year player was burned by A.J. Brown on a 16-yard game-opening touchdown, and flagged twice for pass interference while defending Brown.

Defensive coordinator Leslie Frazier made a point to pull Norman aside for a pep talk.

The Bills were missing both starting cornerbacks with Tre’Davious White out with a sore back, and Levi Wallace placed on injured reserve. White’s status is uncertain for Monday.