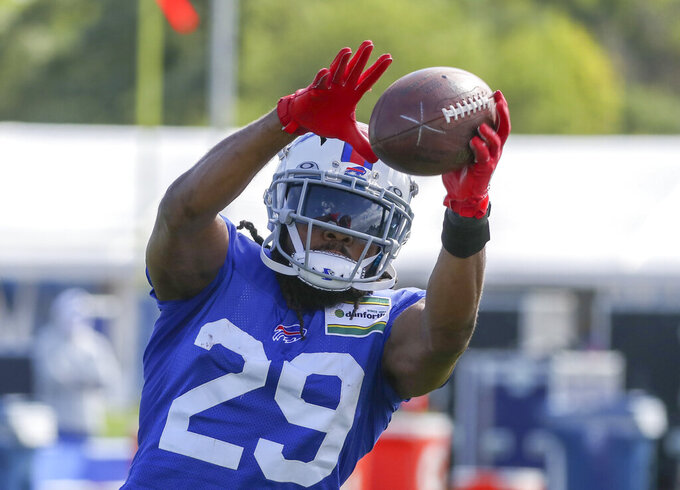 FILE - In this Aug. 18, 2020, file photo, Buffalo Bills cornerback Josh Norman (29) catches a pass during a fumble drill on the second day of training camp in Orchard Park, N.Y. Norman has found peace in his ninth NFL season, and first with the Buffalo Bills. He's put aside whatever lingering frustrations of being cast off by Washington last winter, and remained upbeat despite a missing six games with a nagging hamstring injury, and another after testing positive for COVID-19. (James P. McCoy/Buffalo News via AP, Pool, File)

ORCHARD PARK, N.Y. (AP) — Josh Norman isn’t sure he once would’ve been so patient with the numerous career setbacks he’s endured over the past year.

“You catch me four years ago, five years ago, it probably would’ve been a different story. But now, I’m at peace,” the Buffalo Bills' 32-year-old cornerback said.

“My chip on my shoulder, I don’t know. I didn’t find myself. I was an angry person. I think there were a lot of things going on to where I didn’t quite figure it out yet,” Norman added as the AFC East-leading Bills (8-3) prepare to play the San Francisco 49ers (5-6) at their temporary home in Arizona on Monday night.

“I’m just truly grateful that my mind’s perspective on a lot of things has changed for the good.”

Nothing, it seems, has been capable of wiping the ever-present smile off Norman’s face.

Not what he calls the dark memory of being cast out by Washington in February after four inconsistent seasons and with one more year left on his contract.

Not the nagging hamstring injury that sidelined him for six games, or landing on the COVID-19 list to miss a seventh.

Norman was so upbeat after testing positive, he released a video thanking fans for their support, assuring them he was fine, and expressing sympathy for those who had it worse.

And forget about being reminded of being viciously shoved to the ground by Titans running Derrick Henry on national TV in October, which prompted the commentator to question whether Norman should consider playing again.

Erupting into a hearty laugh, Norman said these things happen before noting what people don’t remember is how he bounced back after the hit during the 42-16 loss at Tennessee on Oct. 13. On the next two plays, Norman tackled Henry for a 5-yard gain, and then broke up a pass intended for A.J. Brown to eventually force the Titans to punt.

“It is what it is,” he said of being bulldozed by Henry. “But the next couple of plays, you’re going to see me. Trust me. I’m here all day. You’re going to feel me. It happened, and then I came back from it.”

It’s one of the few times during a wide-ranging, 22-minute video interview in which Norman showed a hint of the fiery competitor that once made him one of the NFL’s top cornerbacks and, at the same time, among the more notorious trash-talkers during his eight previous seasons split between Carolina and Washington.

Norman cashed in on his most productive season in 2015, when he earned his first and only All-Pro honor and helped the Panthers reach the Super Bowl, by signing a five-year, $75 million contract with Washington. But even that moment came with disappointment, with Norman upset over how the Panthers rescinded their franchise tag in allowing him to become a free agent.

That’s in the past for Norman, who spent a majority of the session citing his faith in God, quoting Mahatma Gandhi and sharing how he’s quickly grown to love Buffalo for its people and as a place.

“You think about New York, you think about busy streetlights and all that other stuff,” said Norman, who is from South Carolina. “But coming to Buffalo, it’s kind of got a little southern taste. So that’s a good feeling. ... I felt like I was home.”

Norman is so impressed, he launched the “Buffalo Business Blitz” to help the community’s small businesses suffering as a result of the coronavirus pandemic. Starting with his own $25,000 donation, Norman asked others to donate with a goal of reaching $1 million to be distributed in $2,500 portions.

He is no stranger to charitable causes through his Starz24 foundation. Norman’s work has ranged from helping those in Puerto Rico in the wake of Hurricane Maria, to distributing bottled water in Flint, Michigan, to establishing a youth community center in his hometown of Greenwood, South Carolina.

“I think Gandhi said this: 'You find yourself and you lose yourself in the generosity of people,‘” Norman said. “If I went through this life and I had a Hall of Fame career and you’d think of me just in that, then I’ve failed you. If I haven’t done something to have a Hall of Fame career in my philanthropy, then I don’t want to be known as anything, because I’m a vampire. I’m sucking air.”

Coach Sean McDermott was the Panthers’ defensive coordinator during Norman’s first four seasons, and sees how the player has smoothed his rougher edges.

“If you’re growing and developing in the right way, you develop self-awareness and you develop a maturity about yourself,” McDermott said. “And I think that’s been enjoyable for me to watch Josh as we’ve reconnected now.”

Linebacker A.J. Klein, who also played with Norman in Carolina, can appreciate the hardships the cornerback went through in going from being a fifth-round draft pick to a key piece of the Panthers defense.

“He came up through the league the hard way and he’s earned everything he’s gotten,” Klein said. “But the type of person he is off the field ... he always has a 'what can I do for somebody else’ mentality.’”

When healthy, Norman can still play.

In his Bills debut in Week 4, Norman was required to fill in for Levi Wallace after the starter was hurt six plays into a game at Las Vegas.

With Buffalo up 23-16 in the fourth quarter, Norman forced and recovered tight end Darren Waller’s fumble to help secure a 30-23 win.

Norman was overjoyed after the game, his first since closing 2019 riding the bench for three games in Washington before being placed on injured reserve in Week 15.

“I think I’ve got a, how do I say this, a newfound appreciation for the game itself,” Norman said, when asked if he was back to his old self. “I’m back from what? Hey, man, the sun always somewhere rises in the end.”