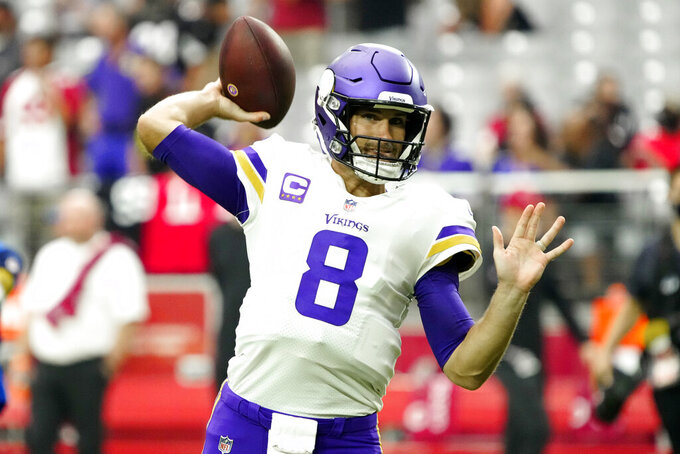 OPENING LINE: Seahawks by 1, according to FanDuel SportsBook.

TURNOVER DIFFERENTIAL: Seahawks plus-1; Vikings plus-1.

SEAHAWKS PLAYER TO WATCH: WR Tyler Lockett. The deep ball is back as a big part of the offense due to the talents of Lockett, who had TD receptions of 69 yards in Week 1 and 63 yards in Week 2. He’s one of six wide receivers in history with TD catches of 60 or more yards in each of the first two games of a season. No player has done so in three straight games out of the gate.

VIKINGS PLAYER TO WATCH: K Greg Joseph. The team's new kicker has made three FGs from 52-plus yards this year, but he missed an extra point and what would have been the winning 37-yard FG on the final play at Arizona.

KEY MATCHUP: Seahawks CBs Tre Flowers and D.J. Reed vs. Vikings WRs Justin Jefferson and Adam Thielen. Shaquill Griffin's exit as a free agent thinned the CB group for Seattle, and Minnesota's WR tandem — with K.J. Osborn emerging as an impactful No. 3 option — is as dangerous as any in the league.

SERIES NOTES: The Seahawks have won seven straight games against the Vikings, last losing at the Metrodome in 2009. This is their first visit to U.S. Bank Stadium. ... Minnesota lost at Seattle in each of the last three seasons.

STATS AND STUFF: Seahawks QB Russell Wilson needs one win to become the second quarterback in league history with 100 or more regular-season victories in his first 10 years. Peyton Manning (105) was the first. ... Jason Myers has made 36 straight FGs for the Seahawks but missed an extra point in the fourth quarter of last week’s loss to Tennessee. ... Seahawks LB Bobby Wagner had a franchise-record 20 tackles against the Titans, the most by any player in the league since Kwon Alexander in 2016. ... Vikings QB Kirk Cousins moved into fourth place on the franchise list for career QB starts (49). ... Vikings DE Danielle Hunter is second in the NFL with four sacks. ... Vikings LB Eric Kendricks is second in the league with 26 tackles, trailing only Wagner.