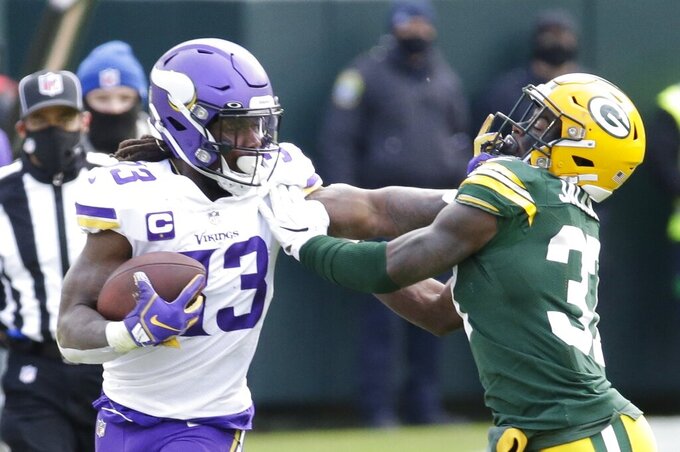 GREEN BAY, Wis. (AP) — The Green Bay Packers are stumbling into their NFC championship game rematch after revealing the same weakness that cost them a trip to the Super Bowl last season.

When an opposing running back starts heating up, the Packers rarely find a way to slow him down.

The gusty conditions at Lambeau Field that made every downfield pass an adventure meant the Packers knew the Vikings (2-5) would hand the ball to Cook repeatedly. They still couldn’t stop him.

The 49ers, who host the Packers (5-2) on Thursday night, certainly know the scouting report on how to beat Green Bay.

San Francisco won the NFC championship game 37-20 by rushing for 285 yards, with Raheem Mostert gaining 220 of them. Mostert is on injured reserve with a high ankle sprain and won’t be available Thursday, but the 49ers usually have a quality rushing attack no matter who’s carrying the ball.

Green Bay’s issues on defense go beyond stopping the run. The Packers also have trouble bringing down running backs who catch passes in the open field.

“When you have more hats to the ball, there’s less missed tackles,” Packers safety Adrian Amos said. “It’s a lot harder to tackle when it’s one on one in the open field. Watching the film tomorrow or watching it later today, I will see more of where we can avoid being in those one-on-one situations. We need more guys getting off of blocks and more guys running to the ball.”

The Packers had plenty of other problems Sunday.

They had four scoreless trips to Vikings territory in the second half. They were penalized nine times for 85 yards. Davante Adams caught three touchdown passes, but no other wideouts had more than one reception. A team that prides itself on playing well in brutal Green Bay winters struggled to deal with the wind Sunday.

All those issues proved costly as the Packers lost to a struggling Minnesota team and failed to capitalize on the injuries that depleted the Vikings’ secondary.

“This definitely qualifies as one of those games where if you want to be a great team, you’ve got to handle business at home,” Packers quarterback Aaron Rodgers said. “Look, it’s not the same type of home environment (without fans). I get it. But it’s 2020 and we’re in a different NFL this year. It’s still a game we should win, a team with the trade deadline coming and questions about their coach during the week. Yeah. These are one of the games we need to win. Hopefully it’s just a reality check for us.”

The biggest reality check the Packers received came from Cook, who ran for 163 yards on 30 carries and caught two passes for 63 more yards. Cook’s an elite NFL running back who makes plenty of defenses look foolish. But he put up the kinds of numbers against Green Bay that will have every offensive coordinator in the NFL taking notice.

“I think we’ve all got to look critically ourselves and we better figure out a solution quickly because the formula’s been written and we have got to step up and get it fixed,” LaFleur said. “If not, we’re going to continue to get these types of results.”