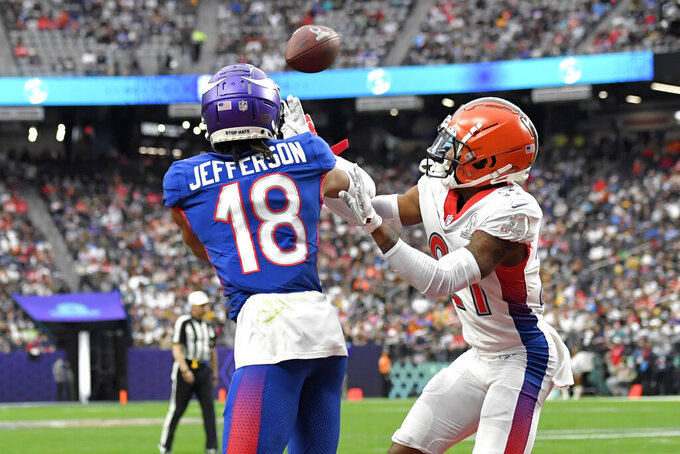 AFC cornerback Denzel Ward (21), of the Cleveland Browns, right, breaks up a pass intended for NFC wide receiver Justin Jefferson (18), of the Minnesota Vikings, during the first half of the Pro Bowl NFL football game, Sunday, Feb. 6, 2022, in Las Vegas. (AP Photo/David Becker)

LOS ANGELES (AP) — Justin Jefferson is excited the Minnesota Vikings are getting an offensive-minded head coach.

“I’ve been hearing nothing but great things about him,” Jefferson said on the AP Pro Football Podcast. “First coach to have on the offensive side so excited. It does matter, especially when your head coach is on the defensive side. You know, they’re always on defense. They’re not coming to the offensive side unless you’re doing something wrong. So it’s good to finally have an offensive-minded coach for the first time, especially all the good things that the Rams have been doing all year.”

Jefferson has already established himself as one of the NFL’s best wide receivers in just two years. He set an NFL record for most yards receiving in his first two seasons with 3,016.

But Jefferson hasn’t tasted team success. The Vikings finished 7-9 his rookie season and 8-9 this past season. Meanwhile, former LSU teammates Joe Burrow and Ja’Marr Chase have led the Cincinnati Bengals to the Super Bowl.

“I just love their connection,” Jefferson said. “I love seeing them perform, especially at this type of level, and I’m excited to see what they have in a Super Bowl. ... They’ve been playing together, so to have two years of college, take off one year and then go to the league and play with Joe again is great. I wish I would have had that same thing.”

Jefferson is appreciative of his connection with Kirk Cousins, the often-criticized, three-time Pro Bowl quarterback.

“Ever since I stepped inside the building, Kirk was always that guy that ‘what we need to do to better ourselves’ or ‘let’s do this after practice to get some extra reps in.’ So he definitely was always a quarterback to be that leader and to try to take control and try to build that connection with me and him. They put our lockers right next to each other. So we’re always talking to each other, trying to find new things to learn about each other. So our connection is growing. I’ve been having two crazy years and he’s the credit to that.”

Jefferson, who appeared on Radio Row at the Super Bowl on behalf of Old Spice, sympathizes with Philadelphia Eagles receiver Jalen Reagor, who was picked one spot before him in the 2020 draft. Reagor went No. 21 overall. He has 64 catches for 695 yards and three TDs. Jefferson has 196 receptions, including 17 TDs, to go with his record-setting yards.

“I’m definitely grateful for being in Minnesota, having the two seasons that I had and who would have known, I probably wouldn’t have had those type of seasons in Philly,” Jefferson said. “He’s always going to be attached to me. I honestly hate it. I hate it for him. I mean, he didn’t ask for any of this. He’s just being the player that he is. So I definitely hate it. I hate it for him, just being compared to me all the time, especially with the success that I’m having.”

Does Jefferson root for his friends on the Bengals or his future coach on the Rams sideline?