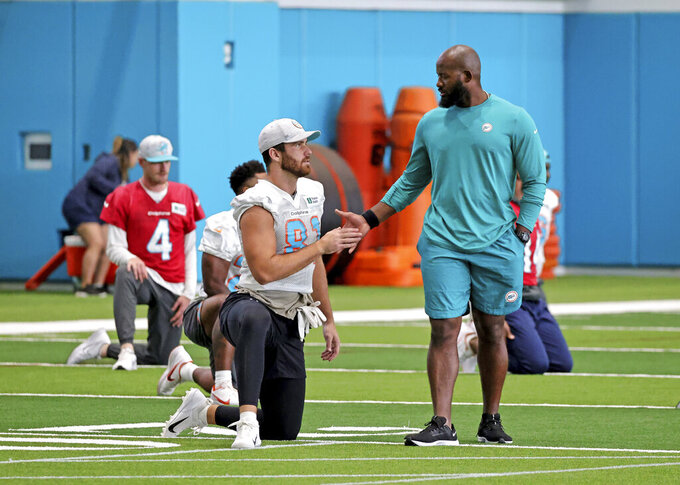 MIAMI GARDENS, Fla. (AP) — Most NFL teams who are chosen to play in London take the following week off, a perk that gives minds and bodies a needed break after enduring two intercontinental flights that come in the span of three or four days.

Not the Miami Dolphins.

They’ve lost five in a row, landed at home early Monday morning after needing a nine-hour flight home after the latest of those defeats, and went right back to work. They play host to the Atlanta Falcons — a team that got last week off following its game in London — on Sunday.

In Flores’ mind, the idea of sitting around for 14 days between games, with a five-game losing streak highlighted — or lowlighted? — by a 23-20 loss to a Jacksonville team that had dropped 20 consecutive games was not something that would have been enjoyable.

So, even though it meant getting right back to work on weird sleep cycles after about 9,000 miles of flights, Flores found it preferable to any other alternative.

“I think we’re just all at this point super hungry and ready to just get a win," Dolphins safety Brandon Jones said.

The Falcons (2-3) chose to take their bye after going to London, where they defeated the New York Jets 27-20. The Dolphins (1-5) didn’t opt to have their bye scheduled for this week — something that worked for them in 2017, when they came home from London, kept going with no break and won their next three games.

“Every team has to make the decision that’s best for them,” Falcons coach Arthur Smith said. “Just because we took the bye and they didn’t doesn’t mean (anything) if you don’t play well or go out there and play sloppy. You’ve got to play well to have a chance. We did what we thought what was good for us.”

Falcons quarterback Matt Ryan said he saw ways Atlanta benefited from the break, time that allowed his team to heal up and critically evaluate itself for a few days.

“I think we’ve been getting better as the year has gone on, which is good," Ryan said. “I think everybody is getting more comfortable. When you look at the five weeks, there’s a lot to clean up. I think we can do better, and that’s encouraging, and I think we’ll make those corrections as we move forward."

Of the 60 instances of teams playing games in London since the NFL began going there annually in 2007 (except for last year, because of the pandemic), 55 have been immediately followed by a week off.

The Dolphins and Falcons met in the preseason as well. It’s the first time since 2017 that the Dolphins are playing a regular-season game against a preseason opponent (Atlanta and Baltimore that season) and the first time the Falcons are doing it since doubling up against Jacksonville in 2019.

The Falcons and Dolphins also took part in some joint practices this summer.

“I don’t think either team looks at the practice, and I don’t want to speak for the Dolphins, but we didn’t stay up all night thinking we’re going to trick them in practice,” Smith said.

The Falcons are playing road games against all three Florida teams this season. They play division rival Tampa Bay annually, now visit Miami and are going to Jacksonville next month.

It’ll mark the ninth time a team has played road games against the three Florida teams in the same regular season, the first time since Buffalo did so in 2013.

Flores and Ryan were teammates at Boston College.

Flores remembers Ryan being forced to sing as a freshman; Ryan remembers being on the scout team during that 2003 season, lining up against Flores in practice and “getting my (butt) kicked most days. ... He was a tough, tough football player."

The two have remained close friends since and Flores said there's a defining trait for elite longtime quarterbacks like Tom Brady, Aaron Rodgers and Ryan. “The magic is not a lot of people have that type of obsession to be great," Flores said.

The Dolphins are trying to avoid starting 0-3 at home for what would be only the second time in the last 10 seasons. Miami lost its first four home games in 2019.