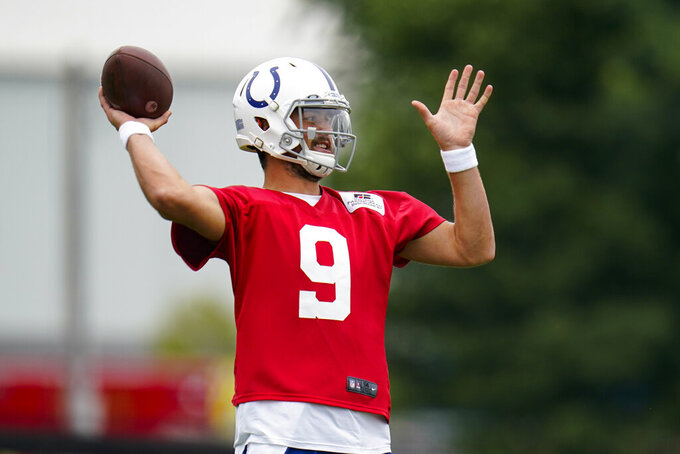 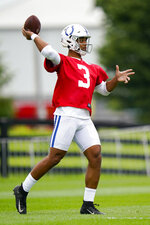 WESTFIELD, Ind. (AP) — The Indianapolis Colts thought a trade for Carson Wentz would be their long-term answer at quarterback.

Four days into training camp, they're already working on a backup plan.

Just one day after the team announced Wentz would be out indefinitely with a foot injury, the Colts signed veteran backup Brett Hundley and started splitting snaps between their newest player and three quarterbacks who have never thrown an NFL pass.

It's also not the way Indianapolis envisioned wrapping up its first week of workouts on the city's northern side.

Eason, a fourth-round draft pick in 2020, spent last season behind durable veteran Philip Rivers and backup Jacoby Brissett. He never played during the regular season and after the preseason was canceled because of the COVID-19 pandemic, Eason never even made a game-day appearance.

Now, suddenly, the former University of Washington star is the most knowledgeable quarterback in the room.

The other quarterbacks on the roster are Sam Ehlinger, the former Texas star who was drafted in the sixth-round in April; Jalen Morton, an undrafted rookie from Prairie View A&M who failed to make an NFL roster in 2020; and Hundley, who intends to spend these next few days cramming.

“Black coffee, lots of tea and just try to pick up this offense,” Hundley said. “It’s all just figuring it out.”

At least Hundley has some experience.

He's played in 18 NFL games, starting nine, since the Green Bay Packers took him in the fifth round of the 2015 draft. Hundley has completed 199 of 337 passes for 1,902 yards with nine touchdowns and 13 interceptions while adding 46 carries for 309 yards and two touchdowns.

Hundley has been here before — making stops in Arizona and Seattle after leaving Green Bay — and said he was planning to join the Colts before Wentz was injured Thursday..

For Eason, Ehlinger and Morton, this is all new.

The strong-armed Eason inherited the starter’s duties, at least temporarily, since Wentz missed the final practice period Thursday. He has thrown three interceptions in team drills over the past two days.

“I'm just getting my feet, getting back in the swing of things," Eason said. “It's seeing the defenses and feeling more and more comfortable every day."

It's unclear how long Eason might have to hold down the job — or whether the Colts would make another move.

“I know you're going to ask about Carson and there’s no timetable right now,” defensive coordinator Matt Eberflus said. “We don’t have any new information for you, when we have that information, we’ll get it to you.”

Wentz's absence isn't the only complication for Indy.

Starting center Ryan Kelly has missed three straight days with a hyperextended left elbow following a collision with running back Marlon Mack. Left tackle Eric Fisher remains on the physically unable to perform list as he recovers from the torn Achilles tendon he suffered in January, and one of those vying to replace Fisher, Julien Davenport, was added to the reserve/COVID-19 list on Friday. The Colts have four players on the COVID list.

Second-year center Danny Pinter has taken over for Kelly while Will Holden and Sam Tevi trade snaps at tackle.

Brady, who was promoted from quarterbacks coach to offensive coordinator during the offseason, is now calling offensive plays as coach Frank Reich is out after testing positive for COVID late last week despite being fully vaccinated.

Eberflus said Reich will be back on the field Monday. Indianapolis is taking Sunday off, a break that will give Indy time to regroup, rethink and perhaps recharge.

“You can't try to learn this whole offense in a day," Hundley said. “You have to focus on what you need to know now and pick up the other stuff as we go along."