Winless Lions desperate for victory vs Eagles before bye 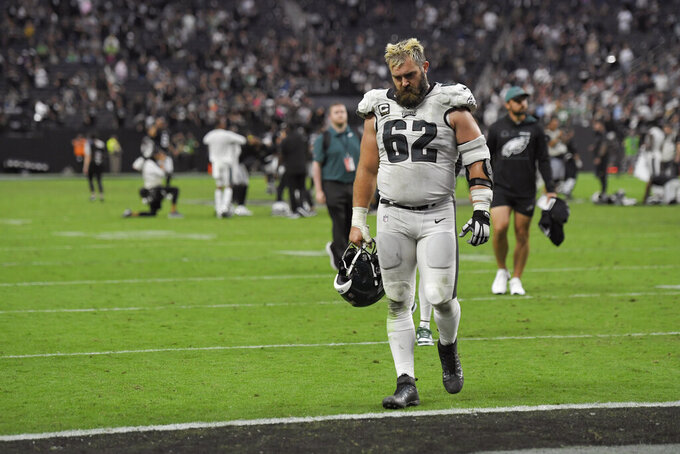 Philadelphia Eagles center Jason Kelce (62) walks off the field after a loss to the Las Vegas Raiders in an NFL football game, Sunday, Oct. 24, 2021, in Las Vegas. (AP Photo/David Becker)

OPENING LINE: Eagles by 3, according to FanDuel SportsBook.

AGAINST THE SPREAD: Philadelphia 3-4; Detroit 3-3.

EAGLES PLAYER TO WATCH: TE Dallas Goedert led the team with 70 yards receiving last week in his first game since Zach Ertz was traded. Goedert should continue to get more targets with Ertz gone. Goedert averages 15.9 yards per catch, second among tight ends.

LIONS PLAYER TO WATCH: RB D'Andre Swift had a season-high 144 yards of offense last week and matched his career high with eight catches. The Philadelphia native leads NFL players at his position with 42 receptions and 391 yards receiving.

KEY MATCHUP: QB Jared Goff against Philadelphia's pass defense. Goff has thrown one TD and four INTs and has fumbled once over the last four games. Eagles CB Darius Slay, playing against his former team, will be motivated to force Goff into more turnovers.

SERIES NOTES: The Lions won three straight, but have lost seven of the last 11 games, including a 58-37 loss at Philadelphia in the 1995 playoffs.

STATS AND STUFF: Eagles are 2-2 as visitors and have the fourth-highest road winning percentage (.561) since 2000. ... QB Jalen Hurts has a passing or rushing TD in 12 consecutive games. Hurts has rushed for at least 30 yards in each of his 11 career starts and leads the team with 361 yards on the ground. Hurts has completed 61.2% of his passes, fifth lowest among QBs who have thrown at least 100 passes. ... Rookie WR DeVonta Smith has 32 catches for 406 yards and a TD through seven games. ... WR Quez Watkins’ average of 19.3 yards per catch is fourth highest in the league. ... DT Javon Hargrave leads defensive tackles with six sacks. ... Philadelphia has been penalized a league-high 58 times this season. ... Detroit is the NFL’s only winless team and has lost 11 straight, dating to Dec. 6, 2020, for the NFL’s longest active losing streak. … The Lions snapped the ball with a lead for the first time this season last week at Los Angeles. ... Lions assistant head coach and running backs coach Duce Staley, a former Eagles RB, was on Philadelphia's staff for 10 seasons and Detroit special teams coordinator Dave Fipp worked for the Eagles for eight seasons. ... T.J. Hockenson, who has had six-plus catches the past two weeks, ranks second among NFL TEs with 38 receptions. ... WR Kalif Raymond had six receptions for a career-high 115 yards receiving against the Rams. ... OLB Julian Okwara has a sack in two straight games. ... LB Jalen Reeves-Mabin had a season-high eight tackles last week. ... Detroit has a bye next week.

FANTASY TIP: Swift is worth a start. He has scored in three straight games and his previous four at home. The second-year pro is averaging 93.3 yards of offense per game this season and has a team-high five touchdowns. The Eagles rank among the NFL's worst against the run.