WRs Lamb, Gallup shining for Cowboys ahead of Beckham visit 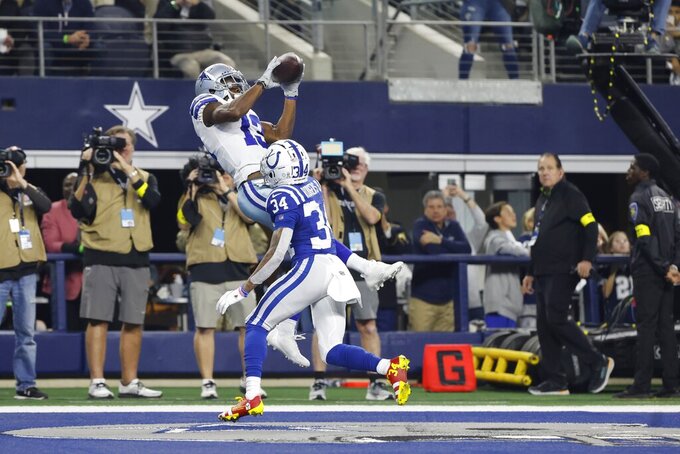 In the past month, Lamb has the only 100-yard games of the season for a Dallas wideout, along with three touchdowns. Gallup just had his first two-TD game since tearing an ACL last January.

All the talk now, though, is about Beckham, who started his career with the NFC East rival Giants against the Cowboys, who will spend Monday and Tuesday trying to convince the 30-year-old to sign.

If Beckham is thinking about adding a second Super Bowl ring after tearing the ACL in his left knee while winning the title with the Los Angeles Rams in February, Dallas (9-3) didn't hurt its case with a 33-point fourth quarter in a 54-19 rout of Indianapolis on Sunday night.

“I mean, we’re winning, look at us,” Lamb said. “Put yourself in this offense and kind of envision it. We’re distributing the ball very well, and I’m sure as hell he would love it. I’m sure.”

Beckham spent most of Monday at the team's swanky headquarters and practice facility in Frisco, 30 miles north of Dallas. Coach Mike McCarthy said the day included a medical review of the three-time Pro Bowler.

Beckham politely declined to discuss his visit with reporters when he arrived at the Mavericks' arena in downtown Dallas. Former star Cowboys receiver Dez Bryant also greeted Beckham at the game.

On Tuesday, Beckham is set to meet with the team's leadership council, a players-only group headed by quarterback Dak Prescott.

Beckham met last week with the Giants, where he spent his first five seasons and had one of the best catches in NFL history against the Cowboys in 2015. He spent part of this past weekend with the Buffalo Bills, strong Super Bowl contenders led by quarterback Josh Allen.

“We’re trying to be as great as we can be in every aspect,” Prescott said. “And obviously getting late into the year with what we’ve got coming up just in our schedule, then obviously making a run at the Super Bowl, you want to make sure you have as many weapons as you can.”

In the seven weeks since Prescott returned from a broken thumb, the Cowboys lead the NFL with 28 offensive touchdowns. They just rushed for a season-high 220 yards.

Lamb, Gallup and both running backs in the tandem of Ezekiel Elliott and Tony Pollard had TDs against the Colts, who helped Dallas by committing four of their five turnovers in the fourth quarter.

Beckham didn't work out for the Giants or Bills with the question of his recovery from the knee injury looming. The Cowboys have been vague about whether that would happen on this visit.

“I want this to work,” Jones said after the rout of the Colts. “That means I'm going to be trying to make it work. So I'm going to be looking for reasons to do, not reasons not to do.”

Lamb has been solid in his first season as the No. 1 receiver after the offseason trade of Amari Cooper in a cost-cutting move. Since being limited to two catches on 11 targets in the opener, he's averaging six catches and 82 yards per game. Four of his six TDs have come in the past five games.

Gallup might have been even better than he was against the Colts in the previous game against the Giants, a 28-20 victory on Thanksgiving. He had several tough catches among season highs of five grabs and 63 yards.

According to the NFL players' union, the Cowboys have $6.3 million in cap space this season. They've already committed the vast majority of their cap space for next season with several key players headed to free agency. These could be issues in trying to get a deal done with Beckham.

Salvation Army donations, probably, with the oversized red kettles beyond the end zones at AT&T Stadium now the center of celebrations again.

Elliott started it as a rookie six years ago when he hopped into one after a touchdown and continued it when he dropped $21 (his number) into one of the kettles two years later.

All four Dallas tight ends got the tradition going again on Thanksgiving with a “Whac-A-Mole” demonstration after rookie Peyton Hendershot scored.

Trying not to be outdone, Elliott solicited Prescott's help after the running back's TD against the Colts. The QB pretended to crank the kettle as Elliott rose up out of it, “jack in the box” style.

“I just had to come up with something to try to top the guys from last week,” said Elliott, who probably will be fined. He and Prescott donated $21,000 to the Salvation Army after Elliott's 2018 fine, and the Cowboys matched it.

Returner KaVontae Turpin badly wants to make an impact either on a punt or kickoff. He might be trying too hard. The 26-year-old rookie returned three kickoffs, but twice pinned the Cowboys inside their 20.

Jones said CB Anthony Brown would be out for the season after tearing an Achilles tendon against the Colts. He's the second cornerback sidelined by a season-ending injury. Jourdan Lewis broke a foot in Week 7 against Detroit.

26 — Dallas' points off turnovers in the fourth quarter were the most in the NFL in at least 45 seasons.

Still two games back of NFL-leading Philadelphia in the NFC East, the Cowboys have the other two sub.-500 AFC South teams the next two weeks in Houston (home) and Jacksonville (away). Then the Eagles come to Texas on Christmas Eve.