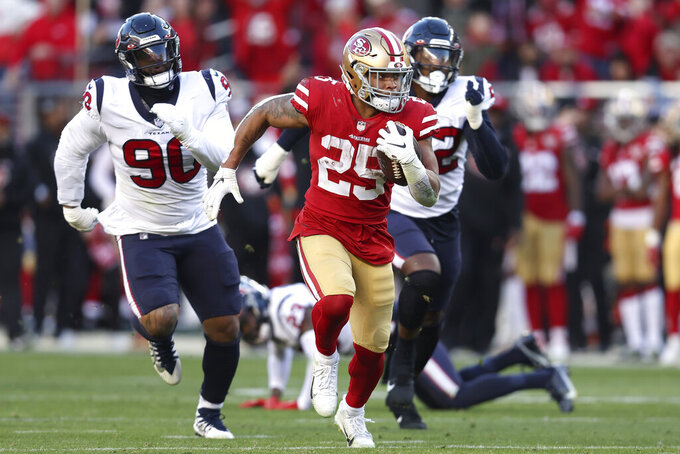 SANTA CLARA, Calif. (AP) — The playoff scenario for the San Francisco 49ers is pretty simple — a Week 18 win against the Rams or a loss by New Orleans will send the Niners to the postseason for the second time in five seasons under coach Kyle Shanahan.

The more complicated question is who will San Francisco start at quarterback for the crucial season finale.

Rookie Trey Lance fared well in his second career start on Sunday, throwing two TD passes in place of an injured Jimmy Garoppolo in a 23-7 win over the Houston Texans that set the stage for the final game.

Garoppolo injured his right thumb the previous week in a loss at Tennessee and was unable to throw a football at all last week for the 49ers (9-7).

Coach Kyle Shanahan said Monday that he hopes the time off for Garoppolo will give the injured ligament in his thumb more time to “re-latch" but is unlikely to be completely healed, leading to what could be a difficult decision.

“If Jimmy’s 100% healthy and could do everything, like perfect, then I would definitely go with Jimmy," Shanahan said. "I’m not just going to throw a guy in after one game like this, when Jimmy’s been doing it for us all year. I think it’s going to be hard for Jimmy to be 100%, which is how most people are right now at this time of year. But Trey did a good job, if Jimmy can’t go, we won’t hesitate at all. But if we feel Jimmy can go and play confident, then Jimmy will be out there.”

Garoppolo struggled throwing the ball after hurting his thumb against the Titans, but will try to return to practice on Wednesday.

Lance overcame a slow start and early interception to go 16 for 23 for 249 yards and two touchdowns against the Texans.

“First half we kind of started off slow; second half, he played outstanding,” receiver Deebo Samuel said. “He was able to hit a good, a couple balls. Once you see a couple guys make plays for you, it gives you the confidence to keep doing it.”

Downfield passing. The 49ers deep passing game was opened up with Lance at quarterback with his average pass traveling 12.5 yards downfield, the most for a San Francisco starting quarterback in the past four seasons. Lance had 10 completions on throws at least 10 yards downfield, including a 45-yard touchdown to Samuel. That was tied for the second most completions at least 10 yards downfield in a game for the Niners since the start of 2018, trailing only Nick Mullens' 11 last season against the Giants.

Fourth-down offense. The Niners failed on two fourth downs on Sunday, with Elijah Mitchell getting stuffed on a fourth-and-1 run in the first quarter and Lance throwing an incomplete pass on fourth-and-1 on the opening drive of the second half. San Francisco is just 1 for 7 on fourth downs in Lance's two starts.

Mitchell. The rookie running back returned from a knee injury and ran for 119 yards on 21 carries and also caught a TD pass. Mitchell has topped 100 yards rushing five times this season and his 878 yards rushing on the season are the most ever for a Niners player in his first NFL season. Mitchell is the fourth rookie since 1990 to top 100 yards in at least five of his first 10 games, joining Edgerrin James, Adrian Peterson and Ezekiel Elliott.

Josh Norman. The Niners benched Norman after he was called for his league-high tying sixth pass interference call of the season. That has been an issue all season for the 49ers, who have been flagged for interference a league-high 22 times this season. But with cornerback Dontae Johnson going on the COVID-19 list Monday, San Francisco could need Norman again this week.

The 49ers visit the Rams on Sunday.