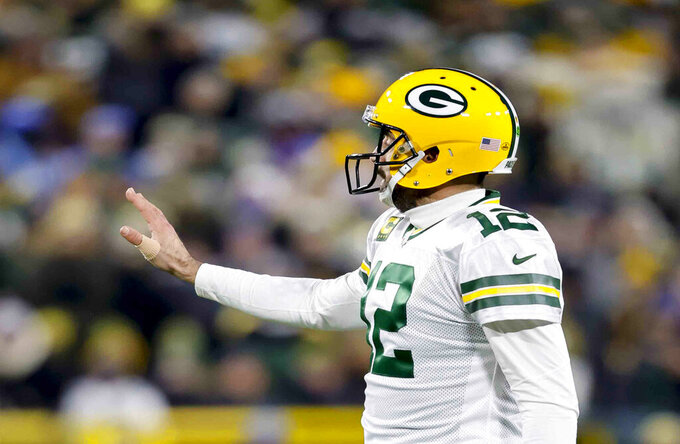 Green Bay Packers quarterback Aaron Rodgers gestures during the team's NFL football game against the Tennessee Titans on Nov. 17, 2022, in Green Bay, Wis. Rodgers acknowledged Wednesday, Nov. 23, that he’s been playing with a broken right thumb for the past six weeks. Rodgers hurt his thumb Oct. 9 during a foiled Hail Mary attempt on the final play of the Packers’ 27-22 loss to the New York Giants in London. Although the Packers have listed Rodgers with a thumb injury ever since, the four-time MVP hadn’t said publicly that it was broken. (AP Photo/Jeffrey Phelps)

Rodgers hurt his thumb Oct. 9 during a foiled Hail Mary attempt on the final play of the Packers’ 27-22 loss to the New York Giants in London. Although the Packers have listed Rodgers with a thumb injury ever since, the four-time MVP hadn’t said publicly that it was broken.

“I just know on the flight home I was in some pain,’’ Rodgers said. “(I) actually didn’t even want to get X-rayed, because I was still going to play, didn’t matter what the X-ray showed. But they talked me into it.”

Rodgers says his thumb now feels the best it has since the Giants game.

Because the Packers (4-7) played a Thursday night game last week — losing 27-17 at home to Tennessee — they had extra time to prepare for Sunday night’s game at Philadelphia (9-1).

“It’s definitely a challenge, but the days off helped,” Rodgers said. “I’m feeling better this week.”

Rodgers hasn’t missed any games, but the injury has limited his practice time and he hasn’t approached the level he reached while earning MVP honors each of the last two seasons. That loss to the Giants started a 1-6 tailspin that has put the three-time defending NFC North champions’ playoff hopes in jeopardy.

Rodgers downplayed the impact of the injury Wednesday and said surgery wasn’t seriously considered. Rodgers also said he didn't believe the injury was the reason the Packers had run more plays than usual in the shotgun formation.

Rodgers said during the first few weeks after the injury, his thumb didn’t get significantly worse but also didn’t get much better.

“There would be a couple plays every game, maybe a snap slightly inside or a hit that might jolt it a little bit,” Rodgers said. “Just dealing with the occasional kind of dull pain and working through it.”

Rodgers noted he’s dealt with other injuries that can affect his throwing. He mentioned a knee injury in 2018 that hindered his footwork and the broken index finger he played through during his college career at California.

The Packers need Rodgers in top form as they attempt to rejuvenate their playoff hopes on the road against the Eagles, who own the NFL’s best record.

Defensive tackle Kenny Clark acknowledged Wednesday that “every game from this point on is a playoff game” because the Packers have so little margin for error. Cornerback Rasul Douglas offered a particularly blunt appraisal.

“Lose and you might as well start planning your trip to wherever you’re going in the offseason,” Douglas said.

The Packers have been in this type of position before.

They were 4-6 in 2016 when Rodgers predicted the Packers would “run the table.” Sure enough, a victory at Philadelphia started an eight-game winning streak that sent the Packers to the NFC championship game, where they lost to Atlanta.

Rodgers noted the similarities Wednesday while also pointing out that 2016 Eagles team was 5-5 rather than 9-1.

“I think when you win, it creates momentum,” Rodgers said. “When I said it in 2016, how many people actually believed then? Probably not many. But then we got the first one. Then we came home and got the second one. We beat Seattle, got the third one and I think there was a lot of momentum that started in the locker room and guys started realizing this was a possibility.