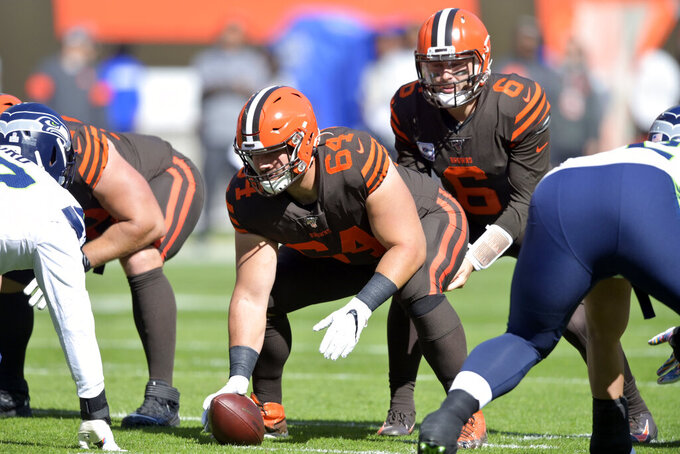 FILE - In this Oct. 13, 2019, file photo, Cleveland Browns center JC Tretter (64) lines up during an NFL football game against the Seattle Seahawks, in Cleveland. A person familiar with the negotiations says Browns' Tretter has agreed to terms on a three-year, $32.5 million contract extension with the club. Tretter, who is in his third season with the team, will receive $23 million guaranteed, said the person who spoke on condition of anonymity because the deal has not been finalized. An announcement could come Friday, Nov. 8, 2019, the person said. (AP Photo/David Richard, File)

BEREA, Ohio (AP) — The Browns may have major issues at several positions. Center isn't one of them.

Steady JC Tretter, who endeared himself to teammates by playing much of last season with a severely sprained ankle, has agreed with Cleveland on a three-year, $32.5 million contract extension, a person told The Associated Press on Thursday.

Tretter will receive $23 million guaranteed, said the person who spoke on condition of anonymity because the deal has not been finalized. An announcement could come Friday, the person said.

NFL Network was first to report the agreement.

With Tretter in the middle, Cleveland's offensive line did not allow quarterback Baker Mayfield to be sacked in five of the team's final seven games in 2018.

"JC's a leader in that room in general, and he makes a bunch of the calls up front," Browns coach Freddie Kitchens said on his radio show. "He and (left guard) Joel (Bitonio) kind of lead that room and it's always comforting for a young quarterback to have a guy that he can depend on to make some of the calls or even confirm some of the calls he wants to make in the heat of the moment."

The 28-year-old Tretter has been a steady presence up front for the Browns, who signed him as a free agent in 2017. He started all 16 games last season and played every snap despite needing daily treatment for a high ankle sprain.

"I tell those guys when training camp starts that once they put the pads on they're not going to feel fine or perfect again until February and JC is the ultimate warrior per se when he played last year with basically a high ankle sprain all year and just kept grinding it out, kept showing up," Kitchens said. "He practiced for the most part, wasn't as full-go as you'd like him to be but he was able to get to the game and play well being a little hurt."

Tretter was drafted by Green Bay in the fourth round in 2013 out of Cornell. He played three seasons with the Packers, making 10 starts.