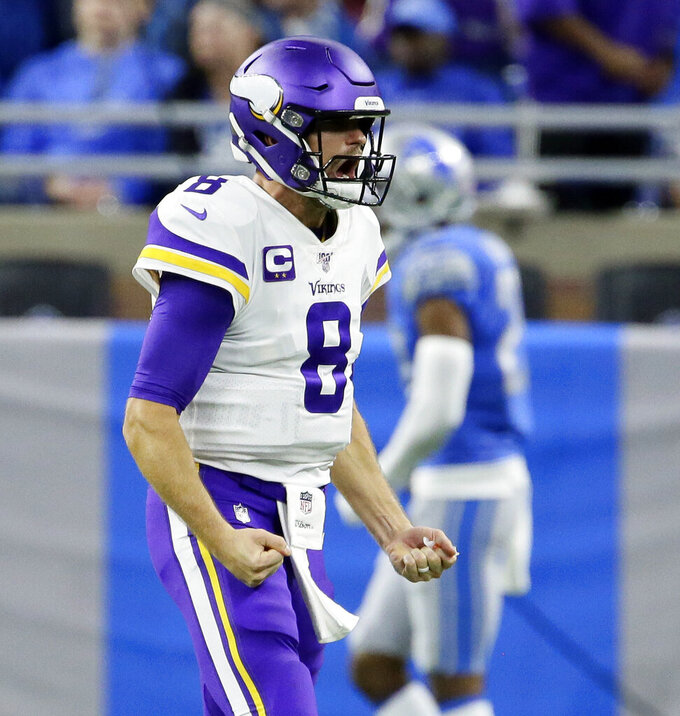 Minnesota Vikings quarterback Kirk Cousins reacts after a touchdown during the second half of an NFL football game against the Detroit Lions, Sunday, Oct. 20, 2019, in Detroit. (AP Photo/Duane Burleson)

EAGAN, Minn. (AP) — With a chance to drain the clock and preserve Sunday's win at Detroit, the Minnesota Vikings lined up on second down with three tight ends next to the offensive line; eight players with their hand in the turf to block for running back Dalvin Cook.

The Lions reacted to stop the run when Kirk Cousins pulled the ball away from Cook. With just one single defender deep, Cousins connected with Diggs for a 66-yard pass, the longest pass of the season for Minnesota, down to the 4-yard line to effectively end Sunday's 42-30 victory.

The Vikings are making it difficult for opponents to decide what they want to try and stop.

Cook is leading the league in rushing after finishing with 142 yards against Detroit, while Cousins now leads the league in passer rating (114.3) and yards per attempt (9.1) after the best three-game stretch of his career.

"We got them at the end right there," Cook said. "That was a great play call by coach, man. But we kind of like baited them into it. They kind of knew the run was coming. They thought we were going to run the time out. We got the one-on-one coverage with Diggs and he took the top off once again."

Cousins' deep pass to Diggs was the final pass attempt of the game for Minnesota. Two plays later, Cook ran in his second touchdown of the game and all that was left was four kneel downs for Cousins on the final possession.

"I just felt like when the play calls were coming, I was in agreement with them so many times feeling like it would give us a great chance," Cousins said after the game. "We were running the ball proficiently and when you do that, I think it helps a play-caller, it helps the quarterback feel like they have the wind at their back a little bit."

The Vikings' balance has led to their breakout. Minnesota has 106 runs and 90 pass attempts during a three-game winning streak.

Meanwhile, Cousins became the first quarterback in NFL history with at least 300 yards passing and a 135.0 passer rating in three straight games. Over that stretch, Cousins has a passer rating of 142.6 with 976 passing yards, 10 touchdowns and just one interception.

"He's playing the best I've seen him play since he's been here, obviously," coach Mike Zimmer said after Sunday's game. "It's a credit to offensive coaches — what they're doing. I feel like we are playing to his strengths."

Playing to Cousins' strengths means using play-action passing. Cousins was 13 of 18 for 209 yards, three touchdowns and a 150.2 rating on play-action passes against Detroit, according to Pro Football Focus.

The past three weeks, Cousins has a 157.2 rating on play-action, completing 32 of 42 passes for 592 yards and seven touchdowns without an interception, according to Pro Football Focus.

For the second time this season, Zimmer said the Vikings' coverage wasn't tight enough on receivers. Quarterback Matthew Stafford threw for 364 yards and four touchdowns to Marvin Jones. Zimmer also echoed the sentiment after the loss at Chicago.

"We had to make some adjustments at halftime because we weren't covering enough," Zimmer said Sunday. "We can play a lot better than that."

Adding to the balanced offense Sunday was the increased usage of tight ends Kyle Rudolph and Irv Smith in the passing game. The two combined for 10 catches on Sunday after totaling 16 catches through the first six games.

Rudolph has been complimented for his blocking early this season, stepping in for tight end David Morgan who's missed the entire season with a knee injury. On Sunday, Rudolph had five catches for 58 yards and scored his first touchdown of the season.

With Zimmer saying coverage hasn't been tight enough, it's natural to look at cornerback Xavier Rhodes. Rhodes is a two-time Pro Bowl selection, 2017 first-team All-Pro and the team's top-paid cornerback, accounting for a $13.337 million cap hit this season.

Two of Jones' four touchdowns on Sunday came with Rhodes in direct coverage. On Jones' final score, a quick goal-line pass where Jones ran to the outside and simply turned in front of Rhodes, the cornerback yanked off his helmet in frustration.

Adam Thielen caught a 25-yard touchdown pass, on play-action from Cousins, for Minnesota's first score, but he injured his hamstring and missed the rest of the game. With a short week, his recovery will be watched closely.

Thielen hasn't missed a game in his career, playing in 87 straight. While the Vikings didn't practice on Monday, they had to send in an approximated injury report and the team said Thielen wouldn't have practiced.

Linebacker Ben Gedeon missed Sunday's game with a concussion, but he was listed as a full participant.

1: According to NFL NextGen stats, Cousins was pressured just once on his 34 dropbacks on Sunday. Cousins wasn't sacked in the game and has been sacked just once the past two games.

The short week for a Thursday home game brings many reunions. Cousins will be looking to keep his roll intact against his former team in Washington. The Vikings defense will also see familiar faces in Redskins quarterback Case Keenum and running back Adrian Peterson.