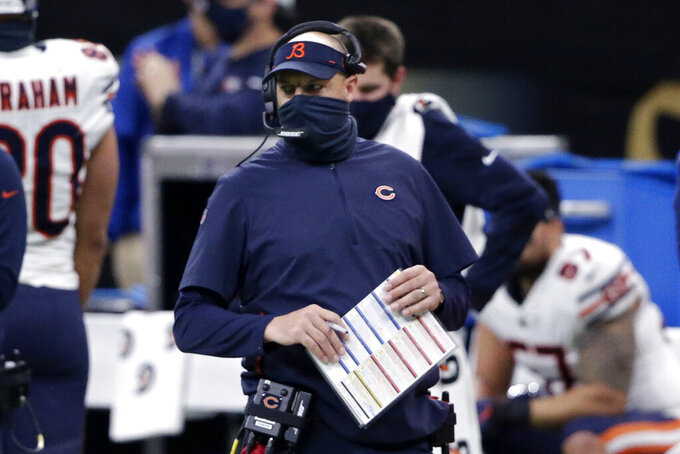 CHICAGO (AP) — Chairman George McCaskey insisted the Chicago Bears have the right culture to become a winning franchise. So the team is sticking with general manager Ryan Pace and coach Matt Nagy for at least another season.

What helped convince him to stay the course rather than make sweeping changes? A six-game losing streak — and how the team responded to it.

“The leadership, the collaboration, the adaptability, the ability to handle adversity,” McCaskey said. "Listen, we all want things to get better, and a lot of times you have to go through tough times before they get better. The way they handled success in 2018 and the way they’ve handled adversity the last two seasons lead us to the conclusion that they’re the best people to lead us in 2021.”

The decision might not be popular in Chicago, where the Bears are coming off back-to-back 8-8 seasons after winning the NFC North at 12-4 in 2018.

They bounced back from that six-game losing streak — their worst since 2002 — to make the playoffs for the second time in three years, albeit as the seventh and final seed in an expanded field. The Bears then got knocked out by New Orleans in their wild-card matchup on Sunday, giving them eight losses in their final 11 games, counting the postseason.

“The popular opinion is to make a change because we hit adversity,” team president Ted Phillips said. “I get it. But holding people accountable is much more than just starting over. Other teams looking for new football leadership, they point to the ability to overcome adversity, the need to adapt to challenges, the need to have a collaborative working environment between the head coach and the general manager.”

He said the Bears have the sort of “football culture all teams strive for.” But they also have a 42-54 regular-season record with two playoff appearances and no postseason wins in Pace's six years. Nagy is 28-20 in three seasons.

The Bears have just six playoff appearances in the past 20 years and haven't won a postseason game since the 2010 team played for the NFC championship.

McCaskey said Pace and Nagy are “growing in their roles.” But should that still be the case, particularly with Pace?

“As far as whether six years is the right amount of time for a general manager to grow into his position, I think it depends on the situation,” McCaskey said. “I don’t think there’s any magic number. Like I said, we take the approach that the person’s entire body of work is considered to decide whether the employment relationship should continue.”

Pace staked his reputation on quarterback Mitchell Trubisky when he drafted him with the No. 2 overall pick in 2017 instead of Patrick Mahomes or Deshaun Watson. The decision remains a sore spot in Chicago.

The question is what Pace learned from that miscalculation as he tries again to find a quarterback.

“I get the question,” he said before sidestepping it.

One difference this time is he'll be working with Nagy, who was an assistant in Kansas City when the Chiefs drafted Mahomes.

Pace didn't rule out trying to re-sign Trubisky, who has an expiring contract after the Bears declined their fifth-year option for 2021. “Everything's on the table,” Pace said.

The same goes for possibly using the franchise tag on Allen Robinson. The star receiver expressed frustration that they were unable to agree to an extension.

“When I think about the list of things we need to talk about this offseason, obviously that’s a big decision and a big part of it,” Pace said. “You know how we feel about Allen, how respected he is in the building.”

One person who won't be back is defensive coordinator Chuck Pagano. He is retiring after two years in Chicago and more than three-and-a-half decades coaching at the college and NFL levels.

“I’m excited to start this new chapter of my life and can’t wait to be able to spend more time with my family,” he said in a statement. "This has been an amazing ride and I have made countless relationships that I will cherish forever.”

The 60-year-old Pagano has coached at the college and NFL level since 1984. He was Indianapolis' head coach from 2012 to 2017, leading the Colts to a 53-43 record and two AFC South championships.

He spent a year consulting for the NFL before getting hired in Chicago, where he inherited one of the league's best defenses after Vic Fangio left to become Denver's coach. Though still effective, that unit has taken a step back over the past two years. Nagy said internal and external candidates will be considered.

“What he’s brought to us, and what he’s taught everybody in our family here is second to none,” Nagy said.

NOTE: Pace said he does not expect any players to have major offseason surgeries.