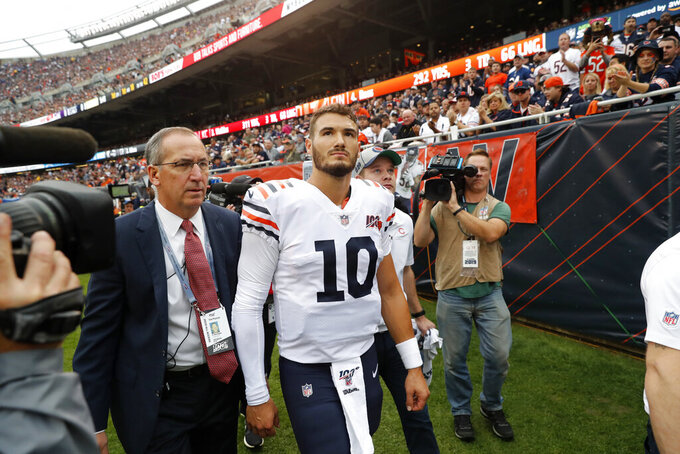 FILE - In this Sunday, Sept. 29, 2019, file photo, Chicago Bears quarterback Mitchell Trubisky walks to the locker room after being injured during the half of an NFL football game against the Minnesota Vikings, in Chicago. The Bears envisioned Trubisky showing why he was drafted with the No. 2 overall pick in 2017 and a more dynamic offense helping take the load off one of the NFL’s best defenses in coach Matt Nagy’s second season. So far, it’s not happening. (AP Photo/Charles Rex Arbogast, File)

CHICAGO (AP) — The Chicago Bears came into the season with soaring expectations. They hit their bye staggering and vowing to get things right.

A 24-21 loss to the Oakland Raiders left the defending NFC North champions with a 3-2 record heading into their week off and one big question hanging over them. And it centers on their offense.

The Bears envisioned quarterback Mitchell Trubisky showing why he was drafted with the No. 2 overall pick in 2017 and a more dynamic offense helping take the load off one of the NFL's best defenses in coach Matt Nagy's second season. So far, it's not happening.

The defense led by Khalil Mack has mostly done its part, dominating in the first four games before getting pushed around by the Raiders particularly in the first half. The Bears have no major complaints about their special teams, but it's a different story on offense.

"Offensively the numbers show, we all know it, we all understand it," Nagy said. "We're not playing where we need to be at. We need to be more productive. It's inevitable that a defense that we've had the first four weeks of the season, there's going to be a time when there's going to be a little struggle. (Sunday) happened to be that. That's credit to Oakland. But when is the offense going to step up and take over for that?"

The Bears find themselves in a familiar spot.

A 31-28 overtime loss at Miami last season dropped them to 3-2. They then came up short against New England, falling by seven when Kevin White got stopped at the 1 after hauling in a 54-yard pass from Trubisky. The Bears then went on a 9-1 run that propelled them to the division championship with a 12-4 record and their first playoff appearance since the 2010 season.

Getting the offense on track will be Nagy's main focus leading up to the game against New Orleans on Oct. 20. At the moment, things aren't looking good.

The Bears rank 30th overall on offense and in yards per play, 28th in scoring and 26th in rushing. Instead of establishing themselves among the most potent teams in the NFL, they're keeping company with the New York Jets and Miami Dolphins.

Trubisky struggled in a loss to Green Bay at Soldier Field to start the NFL's 100th season and wasn't much better in a 16-14 win at Denver. He delivered a solid effort in an easy win over winless Washington, completing 25 of 31 passes for 231 yards and his first three touchdowns to go with an interception, only to get knocked out of the next game. Trubisky went down with a left shoulder injury on the opening drive against Minnesota.

Veteran Chase Daniel came on in relief and helped the Bears beat the Vikings 16-6. But he took a step back against Oakland, throwing two interceptions and getting sacked four times.

"The biggest thing is just fixing on the mistakes, watching it, being hard on yourself," Daniel said. "I'm the hardest guy on myself. I didn't play well enough. Backup, regardless, London, it really doesn't matter. It really doesn't. I expect more of myself."

Nagy indicated Trubisky might be ready to return against the Saints. But whether it's him or Daniel behind center, the Bears have to figure out a way to get their ground game going.

Chicago has hit the 100-yard rushing mark just one time this season. Against Oakland, the Bears managed a season-low 42 yards on 17 carries.

One problem is an offensive line expected to be a strength is struggling, both when it comes to creating holes and protecting the quarterback. The Bears allowed four sacks against a defense that had none the previous two weeks.

"We'll have to lick our wounds and be able to come back stronger and use this bye week to get better," Nagy said.

A defense that got gashed for a season-high 169 yards after shutting down Minnesota's Dalvin Cook figures to get at least one starter back. Nagy said this week defensive tackle Bilal Nichols is close to returning after missing three consecutive games because of a broken hand. He had no update on Akiem Hicks, who left in the first half because of an elbow injury. Hicks missed the Minnesota game because of a knee injury.

"We're 3-2, we have a winning record, we know we've been in every game," Nagy said. "I love the character of our guys so when you hit a little bit of adversity we know that we'll pull together and be able to use these losses to make us better."