Brady Bunch: QB has taken over 200 teammates to Super Bowl 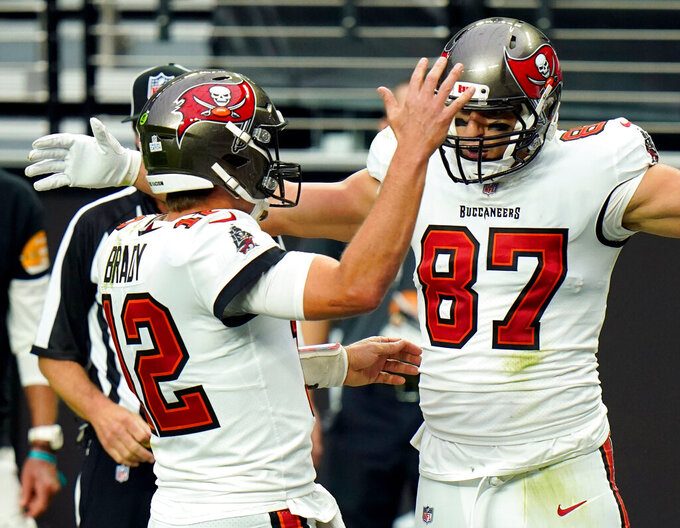 FILE - In this Oct. 25, 2020, file photo, Tampa Bay Buccaneers tight end Rob Gronkowski (87) celebrates with quarterback Tom Brady (12), left, after scoring a touchdown against the Las Vegas Raiders during the first half of an NFL football game in Las Vegas. Gronkowski is one of 218 players to appear in a Super Bowl as Brady's teammate, a number that will grow by more than 40 this week when Brady makes his record 10th trip to to the title game. (AP Photo/Jeff Bottari, File) 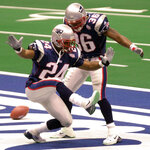 Some are Hall of Famers who are among the biggest names in the sport. Others are anonymous role players whose contributions went mostly unnoticed by outsiders.

There are veterans who joined up for one final run at the title, and wide-eyed rookies who were thrust into the Super Bowl spotlight.

They all are part of the Brady Bunch, the 218 players who have appeared in a Super Bowl as Tom Brady’s teammate in his record nine previous trips to the title game with New England. That list will grow by more than 40 names next Sunday when Brady plays in his 10th Super Bowl and first with his new team in Tampa.

Of those players who have been part of Brady’s supporting cast, 164 got a Super Bowl ring out of the trip, accounting for nearly one-quarter of the players who were on a winning team in the Super Bowl since Brady became a starter in 2001.

Some went along for the ride and barely made an impact on those six titles Brady won. Others delivered the key plays that decided those games, whether it was Malcolm Butler’s game-sealing interception at the goal line against Seattle, or Adam Vinatieri’s inning kicks against St. Louis and Carolina.

Here’s a look at some of them:

No one has played in more Super Bowls with Brady than Stephen Gostkowski, who went with him six times during their tenures in New England. Rob Gronkowski can join a group right behind Gostkowski this year with his fifth appearance, matching the number for Matt Light, Devin McCourty, Patrick Chung and Matthew Slater.

Three of Brady’s Super Bowl teammates have already been inducted into the Hall of Fame with more likely to come down the road. Ty Law, who played on the first three title teams in New England, was inducted to the Canton, Ohio shrine in 2019 and is the only one of the three to get there based mostly on their careers with Brady.

Randy Moss and Junior Seau joined up with Brady late in their careers and both made big impacts during the perfect 16-0 regular season in 2007, but came up short in their only trip to the Super Bowl.

Richard Seymour is a Hall of Fame finalist this year and others such as Gronkowski, Vinatieri and Darrelle Revis could follow in upcoming years.

Brady has completed passes to 37 players in his nine previous Super Bowl trips, with a few standing out as his favorite targets. Julian Edelman and Deion Branch, who both won Super Bowl MVPs with Brady, are tied for the most catches with 24 apiece. Edelman’s 337 yards are 16 more than Branch for the most of any of Brady’s targets.

Gronkowski could pass them this year as he comes into the game with 23 catches for 297 yards. He already has the most TD catches from Brady with three, one ahead of David Givens, Danny Amendola and linebacker Mike Vrabel.

Gostkowski has the most points scored alongside Brady with 33, but two other players have more significant scores. James White scored 20 of his 26 career Super Bowl points in the comeback win over Atlanta four years ago, including the TD that helped force overtime and the OT winner.

Vinatieri is next with 20, including the field goals that won the title in Brady’s first two trips.

Tampa Bay edge rusher Jason Pierre-Paul can join a much more exclusive list as one of the players to beat Brady in a Super Bowl and win a title with him, having been part of the Giants that beat New England after the 2011 season. Pierre-Paul had two passes defensed and a quarterback hit in the 21-17 victory that season.

The only others to do that are Chris Long and LeGarrette Blount. Both were part of the 2016 champions with the Patriots and then were with Philadelphia the next season when the Eagles spoiled a repeat attempt. Blount also won a title with Brady in the 2014 season.

Only two players went to the Super Bowl with Brady more than once and never got a ring out of it. Guard Logan Mankins and receiver Wes Welker were both part of the New England teams that lost to the Giants following the 2007 and ’11 seasons. Welker then went to the title game one more time with Denver in the 2013 season — and lost for a third time against Seattle.

A few first names have stood out more than others when it comes to Brady’s Super Bowl teammates, led by the nine Brandons: Bolden, Browner, Deadrick, Gorin, King, LaFell, Meriweather, Mitchell and Spikes. That doesn’t even count Brandin Cooks, who played with Brady following the 2017 season