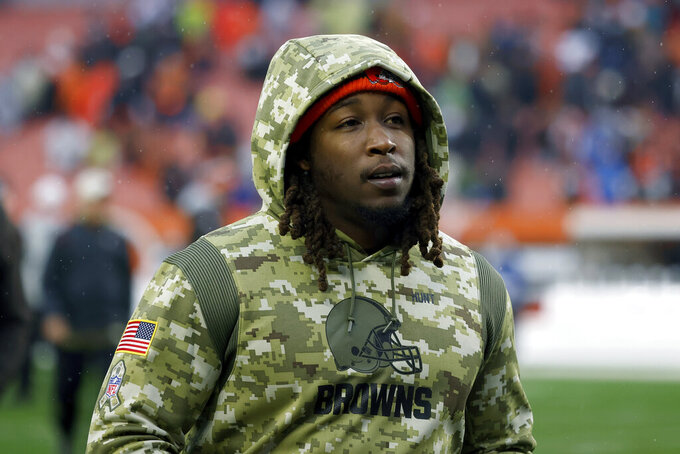 Cleveland Browns running back Kareem Hunt (27) walks off of the field after an NFL football game against the Detroit Lions, Sunday, Nov. 21, 2021, in Cleveland. Hunt and All-Pro starting right tackle Jack Conklin were designated for return from injured reserve and could play in this week's AFC North showdown against Baltimore. Hunt and Conklin will practice Wednesday, Nov. 24, 2021. (AP Photo/Kirk Irwin)

BEREA, Ohio (AP) — The Browns have gotten a little healthier for the holidays — and the Ravens.

“Getting the boys back together," quarterback Baker Mayfield said.

Hunt and Conklin practiced on Wednesday. The roster moves don't guarantee they'll play this week, but it's a positive boost as the Browns (6-5), who have been riddled with injuries all season, head into their biggest game.

Hunt, who missed five games with a calf injury, was confident he'd be able to go.

"See how I feel during the week, but I’m definitely thinking I’m going to play,” Hunt said.

Without Hunt, Cleveland's struggling offense — the Browns have scored 17 points or fewer in six of eight games — has been missing one of its most explosive playmakers. He's also a security blanket of sorts for Mayfield, who can check down on pass plays and dump it off to No. 27 and watch him go.

"Kareem just energy-wise, it’s that spark he comes in and plays with,” said Mayfield, who was limited again in practice as he continues to deal with shoulder, foot and knee injuries. “That’s an extremely vital part for us and when it comes to the explosive portion of our offense, we’ve been missing that with him.

Mayfield struggled to make it through last week's uninspiring win over Detroit. His mobility was limited in the second half by the lower-body injuries, and at one point he struggled just to make it back to the sideline.

He took part in Wednesday's walk-through, but Mayfield was in sweats and a stocking cap during the portion of practice open to reporters. Mayfield took a few snaps from center but mostly watched on what appeared to be a day to rest.

Mayfield sat out one practice last week and said the mini-break helped.

“I still got the mental reps,” he said. “This is the part of the season where a lot of guys are banged up, and a lot of guys, it's so important to be mentally locked in during the week when you might not get some of these reps.”

Hunt rushed for 361 yards and scored five touchdowns in six games before he got hurt against Arizona on Oct. 17. He also had 20 receptions for 161 yards, and is one of the NFL's top dual threats.

Hunt said watching was difficult and he's looking forward to making a difference in this week's prime-time matchup.

“I always bring the fire, so I’m definitely going to come with a lot of energy and fire and just the love because I miss the game,” Hunt said. “I miss practice. I miss playing the games. I miss everything. So I’m definitely excited.”

Conklin sat out the past three games with a dislocated left elbow injury, an injury that was initially feared to be season-ending. Conklin's return will help Cleveland's running game and give Mayfield some added protection.

Conklin's replacement, Blake Hance, who has played more on the inside, struggled on the outside.

Browns coach Kevin Stefanski wasn't sure when he'd see Conklin back on the field.

“Anytime you see a guy down like we did in the game, I was not thinking it would be a weeks’ injury like it was,” he said. "Not surprised (he's back) when you think about Jack and the type of person and player he is. He's as tough as they come.”