Falcons rookie McGary back in practice after heart surgery 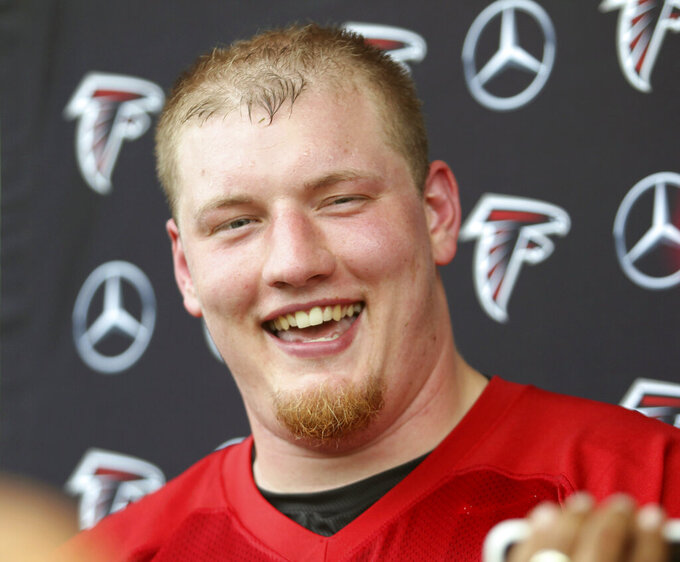 FLOWERY BRANCH, Ga. (AP) — Kaleb McGary is trying to jump back into the competition for a starting job on the Atlanta Falcons' offensive line after missing almost four weeks.

There's only one preseason game left for McGary to show he's ready for the regular season. Still, the rookie first-round pick has good reason to avoid rushing his return.

Having heart surgery, even a minimally invasive procedure, can do wonders for a player's perspective.

"It's not exactly my idea of a fun Wednesday night, you know?" McGary said after Monday's practice. He made his first return to practice on Sunday.

On July 31, McGary had a cardiac ablation procedure to correct a heart arrhythmia problem called ventricular tachycardia. He had two similar procedures in his playing career and sat out about six weeks after it was performed while he was playing at the University of Washington.

"It could have been a lot worse," he said. "There's not much to complain about. I'm happy with how things have gone and confident they did what they could to fix the problem. ... Hopefully it's gone for good this time."

He was first stricken with the problem in high school.

"It was a bummer to have to deal with it again," McGary said. "Of course, no one wants to have to go through heart surgery, whether it's minor or not."

Losing McGary (6-foot-8, 324 pounds) for most of August has helped make Atlanta's offensive line a work in progress.

Ty Sambrailo was competing with McGary for the starting job at right tackle before McGary's medical problem resurfaced.

"It certainly set Kaleb back, missing the time that he did," coach Dan Quinn said.

The overhaul of the offensive line was the Falcons' top offseason priority. It was a pressing concern after Matt Ryan was sacked 42 times last season, the second-highest total of his career.

Lindstrom was the No. 14 overall pick in the NFL draft. Then general manager Thomas Dimitroff acquired the No. 31 overall pick from the Rams to select McGary. The team also signed guards Brown and James Carpenter in free agency.

Gono's rise is perhaps the most significant development on the offensive line during the preseason. Gono signed with Atlanta last year as an undrafted free agent from Wesley College. He did not play in a game despite being kept on the 53-man roster all season, and now he is taking advantage of the year spent developing his skills.

"Couldn't have been more pleased with his development so far," Quinn said after Gono played in the Falcons' preseason loss to Washington last week.

Gono's progress could help the Falcons take a patient approach with McGary.

McGary may be on track to play in Atlanta's final preseason game at Jacksonville on Thursday night.

"If he keeps hitting markers like he has, we think he'll do it," Quinn said Monday.

McGary said he was out of shape after missing so much practice. Even so, he said it has been "awesome" to be back in practice less than one month after the procedure.

"I wouldn't say it's faster than I thought it would be," he said of his medical clearance for contact drills. "I tried to really just keep my expectations low and just go by what the doctors say. I'm returning at the pace the doctors say I should return at and listening to what the team tells me to do. I'm just taking it as fast and slow as I'm told."