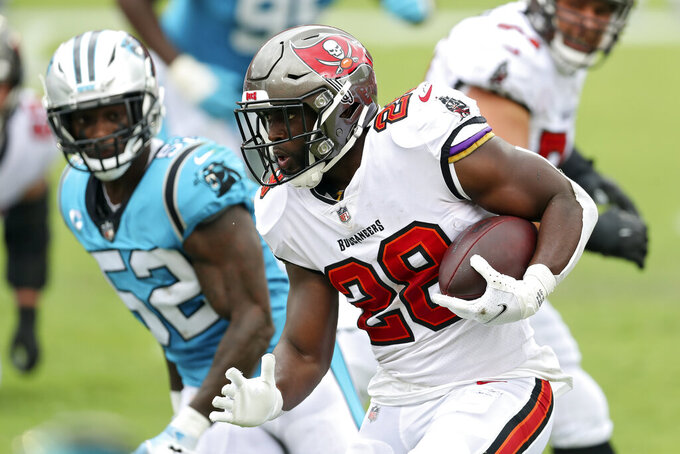 TAMPA, Fla. (AP) — It didn’t take Leonard Fournette long to show the Tampa Bay Buccaneers what he can mean to their offense moving forward.

The fourth-year pro released in a surprise move by the Jacksonville Jaguars rushed for 103 yards and two touchdowns in his second game with his new team despite playing a limited role while learning the system and earning Tom Brady’s trust.

Fournette averaged 8.6 yards per carry and scored on runs of 1 and 46 yards, the latter sealing Sunday’s 31-17 victory over Carolina after the Panthers trimmed a 21-point halftime deficit to seven in the fourth quarter.

The two-time 1,000-yard rusher who was the fourth overall pick in the 2017 draft touched the ball on seven of Tampa Ba’s final eight offensive plays — capped by the 46-yard scoring burst that put the game out of reach with 1:48 remaining.

“My main job was to not go out of bounds, get as many yards as I can and let the clock keep running,” Fournette said. “Coach entrusted me, the O-line, my quarterback, the whole team. They trusted me and I got the job done.”

The Bucs (1-1) signed Fournette two weeks ago to team with starter Ronald Jones and former 1,000-yard rusher LeSean McCoy in hopes of strengthening an inconsistent running game and providing another playmaker for Brady in the passing game.

Fournette rushed for 1,152 yards and gained another 522 yards on 76 receptions for Jacksonville last season. After playing just nine snaps in Tampa Bay’s opener, he had 12 carries and caught four passes for 13 yards against Carolina.

Coach Bruce Arians likes the way the running back position is shaping up with Jones, a third-year pro, as the starter, and Fournette and McCoy coming off the bench in roles that might vary from week to week.

“I love where it’s at right now,” Arians said Monday. “To have Leonard come in with fresh legs in the fourth quarter and pound it like that, very few teams have that combination.”

Fournette, who helped Jacksonville reach the AFC championship game as a rookie before falling out of favor with the Jaguars, said he’s getting more comfortable with the playbook

He’s also enjoying interacting with Brady while carving out a role in the offense.

“It’s cool. I’m hard on Tom, Tom’s hard on me. He expects a lot out of me. He’s a six-time Super Bowl champion, so I expect a lot out of him,” Fournette said.

While the Brady-led offense has gotten loads of attention since the three-time NFL MVP joined the team in free agency, an improved defense continues to make strides. The Bucs forced four turnovers and had five sacks against Carolina while limiting running back Christian McCaffrey to 88 total yards from scrimmage. McCaffrey did have a pair of TD runs and the Panthers gained 427 yards overall. However, most of the damage came after Tampa Bay built a three-touchdown halftime lead.

Brady completed 23 of 35 passes for 217 yards, one touchdown and one interception against Carolina. Arians said he might have had a 400-yard, four-TD day with a little more help from normally sure-handed receivers, including McCoy and Scotty Miller.

So is there a message for receivers moving forward?

Arians called out left tackle Donovan Smith after a subpar performance in a season-opening loss at Orleans. The sixth-year pro, as well as the entire offensive line, did a better job protecting Brady and opening holes for the running game in Week 2.

Arians insists there’s no problem, however, tight end Rob Gronkowski’s impact in the passing game has been minimal. He was targeted just once and had zero receptions against the Panthers.

“We’re not throwing the ball 50 times to tight ends. That’s what we have receivers for, that’s the way our offense is built,” Arians said. “Gronk’s playing great run-blocking in the fourth quarter, so I’m not concerned with his pass catches or his targets.”

Arians said receiver Chris Godwin, who sat out Sunday’s win, cleared concussion protocol and is expected to play next Sunday at Denver.

Zero sacks allowed by the offensive line in Week 2.

Linebacker Shaquil Barrett returns to Denver to face his old team for the first time since signing with the Bucs and leading the NFL with 19½ sacks in 2019.