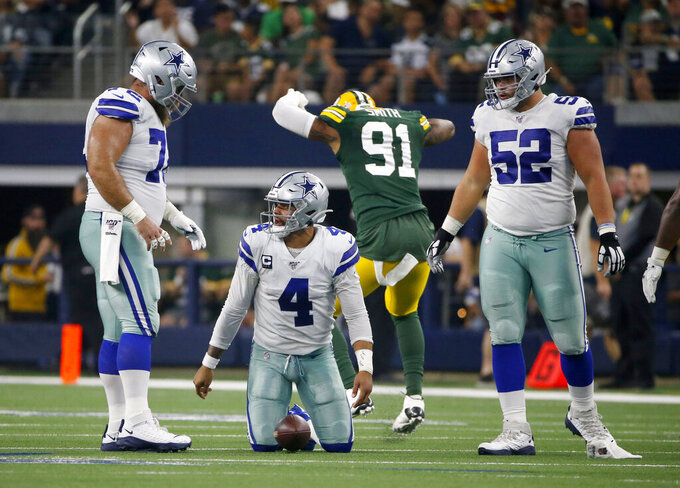 Dallas Cowboys' Travis Frederick, left, and Connor Williams (52) watch Dak Prescott (4) get up off the ground after being sacked by Green Bay Packers' Preston Smith (91) during the first half of an NFL football game in Arlington, Texas, Sunday, Oct. 6, 2019. (AP Photo/Ron Jenkins)

ARLINGTON, Texas (AP) — Jason Garrett slammed the red challenge flag to the ground in front of an official, and emphasized his displeasure by adding a few choice words that drew a yellow flag for unsportsmanlike conduct.

There is no overturning a second loss in a row for the Dallas Cowboys, a 34-24 setback to the Green Bay Packers on Sunday, after a 3-0 start that had only raised already-heightened expectations for Dak Prescott and Co.

The call Garrett questioned got changed after the challenge, with replay showing that Amari Cooper did get both feet down along the Cowboys sideline for a 27-yard catch late in the third quarter. But the 15-yard penalty still got enforced for what officials said was abusive language.

"That's uncharacteristic of not his emotion, but how he conducts himself, the consequences," said Cowboys owner Jerry Jones, who was then informed on what led to the penalty. "Oh, I hope the little darlin' didn't hear something he hadn't heard before."

That came only a couple of series after Garrett had unsuccessfully challenged a 39-yard pass interference call against cornerback Anthony Brown, right before Aaron Jones' fourth rushing touchdown put the Packers (4-1) ahead 31-3.

After his first challenge didn't get overturned, Garrett had one left — and had to use it for Cooper's catch that side judge Scott Edwards had ruled incomplete. The red flag got thrown near the feet of Edwards, who pulled out the yellow flag after hearing from the coach.

"I knew that was the situation. We had to use it in that particular situation to correct the mistake that they made. Didn't handle it well," Garrett said. "Our team handled it really well, though. ... Our team did a really good job handling that adversity."

On first-and-25 after the penalty was enforced, Ezekiel Elliott caught a 26-yard pass, and a few plays later had a 2-yard touchdown run that cut the deficit to 31-17.

Referee Ron Torbert told a pool reporter after the game that Garrett used abusive language to an official, and that there was no consideration of wiping out the penalty even when Edwards' call was overturned.

"There is no reason to pick up that flag. It was abusive language toward an official. It was unsportsmanlike conduct toward an official," said Torbert, refusing to reveal if there was any profanity. "So that was going to be enforced regardless of the outcome of the review."

Prescott finished with a career-high 463 yards passing with two touchdowns, but also matched a career high with three interceptions — and his total for the first four games this season. He was also sacked three times, doubling his season total.

The Cowboys finished with 563 total yards, their most ever in a loss.

Dallas was still down 14 after forcing a Packers punt with 10:29 left when Prescott's short pass toward Michael Gallup was picked off, setting up a field goal for Green Bay. Prescott thought there would be a pass interference call on that play.

"I don't care how many yards I had or anything else like that. Three interceptions and a loss ... none of that matters," Prescott said.

Cooper had a 53-yard touchdown catch midway through the fourth quarter, and finished with 11 catches for a career-high 226 yards. But his feelings were similar to Prescott, more focused on the Cowboys' first drive, when the ball went off his hands and was picked off to set up the first touchdown by Green Bay.

"The only thing that's really on my mind is the dropped ball and the turnover it created. I feel like it gave them a lot of momentum in the game," Cooper said. "I got it, that's what I was thinking. Those are the worst three words in football. ... It was an easy catch, took my eyes off it because I was focused on the touchdown, and I dropped it."