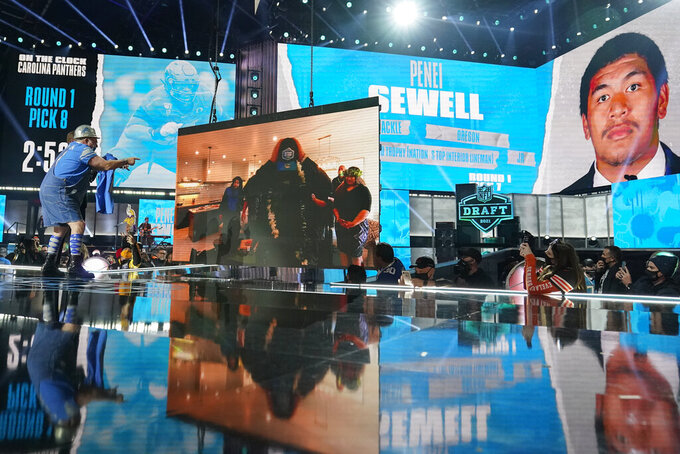 A Detroit Lions fan, left, who was chosen to be on stage, points to an image of the team's first-round pick Penei Sewell, an offensive lineman from Oregon, on the display on stage at the NFL football draft, Thursday April 29, 2021, in Cleveland. (AP Photo/Tony Dejak)

DETROIT (AP) — The Detroit Lions opened the NFL draft by bolstering a strength and closed it by addressing some of their many weaknesses on both sides of the ball.

General manager Brad Holmes seemed to make sensible selections, starting with Oregon offensive tackle Penei Sewell at No. 7 overall, in his first draft with the franchise.

Holmes and first-year coach Dan Campbell are inheriting a defense that ranked among the worst in NFL history last season. Aiming to fix some of the unit’s shortcomings, the Lions used four picks on that side of the ball in the second, third, fourth rounds.

“I think we really gave a boost to our defense," Holmes said.

Holmes could have generated more excitement by taking Alabama receiver DeVonta Smith or Ohio State quarterback Justin Fields, talented players who were taken No. 10 and 11 overall by Philadelphia and Chicago.

The franchise, though, needs substance over style with every move it makes.

Holmes chose Sewell as a key building block for the turnaround he is attempting to oversee, evaluating him as one of the most talented and toughest players available at any position.

“Penei is pretty flashy himself,” Holmes said. “Obviously, it’s termed often as not as sexy when you go with a big lineman. Sometimes, they say it's safe and sound. But I think it will be a very attractive pick when he’s rolling with our offensive line during the season and is making an impact.”

Detroit drafted a pair of defensive tackles that weigh more than 600 pounds combined, hoping they can rotate with and eventually replace veterans Michael Brockers and Nick Williams.

Washington's Levi Onwuzurike, who opted out of last season, was taken in the the second round and N.C. State's Alim McNeill in the third.

The Lions have a lot of weaknesses and their lack of proven cornerbacks is probably at the top of the list.

Holmes tried to do something about it by drafting Syracuse cornerback Ifeatu Melifonwu of Syracuse with the third-round pick acquired from the Los Angeles Rams as part of the Matthew Stafford trade.

“We felt like his skillset was worthy of being selected in the first round," Holmes said. “He’s been one of my favorite players in the draft."

Detroit, with former general manager Bob Quinn, took cornerback Jeff Okudah with the No. 3 overall pick last year. That was the highest an NFL team took a player at the position since 1997 when Seattle selected Shawn Springs.

Okudah had a lackluster, injury-shortened rookie season, and veteran Desmond Trufant was released in March with one season left on his $21 million, two-year contract.

While Detroit appears to be much stronger on offense than defense, three solid receivers led by Kenny Golladay are gone from last year and none of them was replaced by similar players in free agency.

Smith would've potentially given the team a dynamic playmaker early in the first round, but waiting to take a receiver was probably a wise move.

Early in the fourth round on Day 3, the Lions took USC's Amon-Ra St. Brown. He will have every opportunity to become a key receiver for quarterback Jared Goff. The former Trojan is a physical receiver, which is not surprising because his father is two-time Mr. Universe winner John Brown.

One pick after taking St. Brown in the fourth round, the Lions moved up in a trade with Cleveland to select Purdue linebacker Derrick Barnes at No. 113 overall. Barnes will soon be decked out with Honolulu blue and silver merchandise from the team, but his body is already adorned by a tattooed lion that covers the right side of his chest.